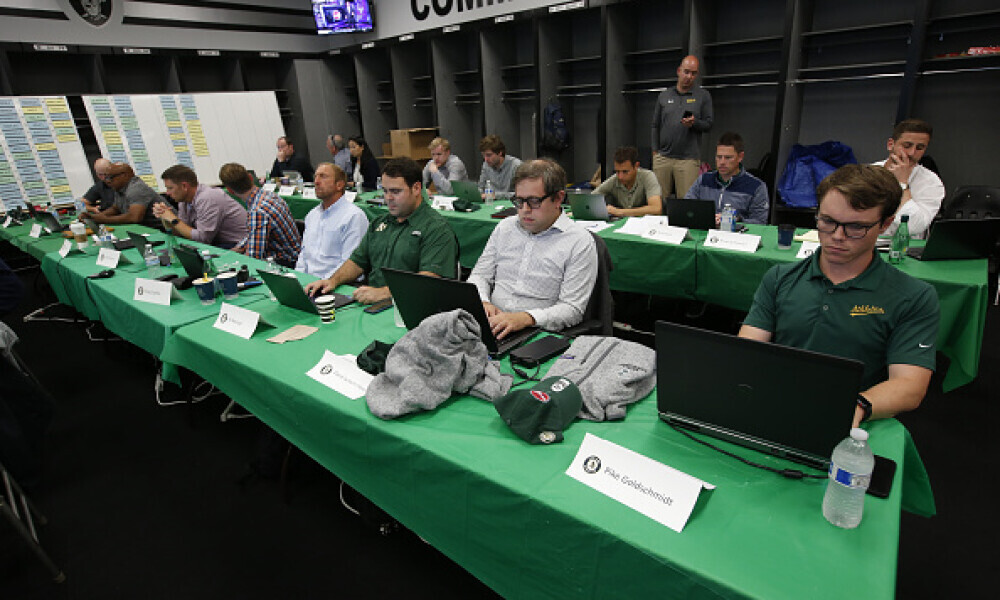 Drafting in a high-stakes fantasy baseball league is a unique experience the first time. Immediately, it will be easy to detect this isn't your home league. The knowledge of most participants is high and the sleeper that sneaks by in a home league will go higher than anticipated.

Knowing the player pool is crucial. Go through the depth chart of every team and know the top minor leaguers, too. Research and preparation are important. If you don't have the time to invest, it's best not to participate.

I always preach to know the rules of your league. Playing in many leagues means more rules and differences. It sounds basic and obvious, but I have seen people come into a draft and not know the rules. There's always someone at the draft table asking a question about the rules. Don't be that person. Go through the rules thoroughly. Make sure you are extremely familiar with everything. There are so many different formats and knowing all details are crucial to success.

The best prep is to do a National Fantasy Baseball Championship (NFBC) draft champions league. It's a 15-team league with 50 rounds. There are no waiver wire adds. It's a draft and lineup setting each week. This really helps me get familiar with the player pool as 750 players are drafted. There might be several players drafted you aren't familiar with and it brings them to your attention to research them.

One of the biggest differences in high-stakes leagues is no trading in most. The NFBC doesn't allow trading. In a home league, you can come out of a draft with deficiencies and make up for them by making a trade. This can't be done in high stakes.

The best draft plan calls for drafting a team with balance since most leagues are 5x5 roto. It's possible to punt a category and win a stand-alone league, but if you're aiming for the overall prize, it's difficult to do. It's certainly possible, but many things need to align correctly for it to work.

Everyone has a different way to attack a draft. Some use draft software, a computer, pen and paper, or someone's rankings. Find your comfort level and be prepared for the draft. For me, I like to use pen and paper. I print out my rankings and cross off names as they are drafted. I will circle or highlight players I am high on or want to target.

Always be prepared as your turn is coming up. We all get sniped but have several players in mind you want. Don't focus on one player and they get picked before the pick and now you're flustered. Always have multiple backup plans. The clock is usually 60 seconds and there's not a lot of time to scramble. If it's an online draft, have several players in the queue.

One of the biggest mistakes people make is drafting names over stats. Building a successful fantasy baseball team is like a puzzle and putting the correct pieces in the right spot. Too many people draft off a Top 300 list and take the best player available. This can be done in the first few rounds, but if you're doing this every round it's going to fail in high stakes, especially with no trades.

Don't get infatuated with player names. It's all about the stats. As the draft goes along, assess the team's strengths and weaknesses and how to improve the weakness. There have been times I really wanted someone in a draft and might have touted that player incessantly, but he wasn't a fit for the current roster. Roster construction is extremely important to the success and is highly underrated. This is where analyzing the players with success in high stakes can help. Look at the roster build and analyze why it won.

Stolen bases are down in baseball and have become scarce. Getting as many players with power and speed early on is the goal, but obviously, those players go quickly. Stolen bases are scarce and this is causing players that steal bases to move up draft boards. Have a plan of attack on how you will handle this category. Fewer stolen bases mean they are scarce and not as many are needed to compete.

A lot of people will say to be conservative in the first few rounds and take proven players with high floors. While that's generally true, swinging for the fences at times is ideal in high-stakes formats. Going for the overall prize means taking chances.

If you're in a snake draft, track the teams around you. For example, if you pick 10th in a 12-team league, look at teams 11 and 12 before making your picks. It could be round nine and you want to take a catcher with one of your picks. If both teams 11 and 12 have a catcher, you can take the chance of selecting another position and come back with a catcher in round 10. It won't always work as one of those teams might take a second catcher, but it's using probability.

Never panic about a run on a position. Don't get sucked into taking the bottom of the tier if you don't like the player. If there's a run on a position, it usually means the value is dropping. Don't worry about where the stats come from in the early rounds. Get the best players and then start looking at balance and positions.

Like anything in life, work hard and be prepared. It's going to be a learning experience the first year. Even the top players struggle initially since it's a new environment and test. Put in the work, be prepared, and have fun on draft day.