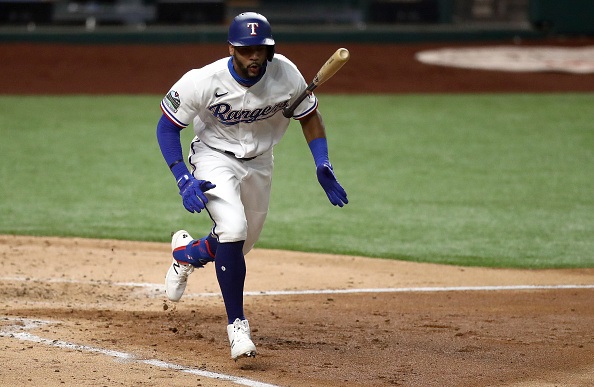 At the beginning of spring, it was all systems go for Texas outfielder Leody Taveras. He was penciled in as the team’s starting center fielder and was even getting a chance to hit leadoff. Manger Chris Woodward had some pretty strong words about Taveras after a slow start to the spring, “He’s got to earn his way back up there. The at-bat quality hasn’t been what we’d like to see.”

Furthermore, his starting job may be in jeopardy. However, we’ll circle back to that at the end.

In 2020, Taveras was a solid power and speed guy, albeit a very low batting average. In 119 at-bats, he hit four home runs and swiped eight bags, all while posting a slash line of .227/.308/.395. Fortunately, Taveras is solid defensively, and his plate discipline in 2020 was a bit warped from his time in the minors.

Through his minor league career, his walk rate typically hovered in the six-to-eight percent range. In 2020 with the Rangers, it was up to 10.4 percent. On the other hand, his strikeout rate was as low as 11.0 percent, and as high as 21.4 percent. With the Rangers last season, it was a whopping 32.1 percent. The fact that Taveras was commanding attention to hit leadoff was due to his speed (96th percentile) and certainly not his ability to get on base.

He struggled with non-fastballs last year and believe it or not, he overperformed against fastballs. Now, to his credit, his average underperformed his expected batting average on non-fastballs.

His batted ball profile is average at best. Sure, his hard hit rate came in at the 63rd percentile, but his barrel rate was below average in the 39th percentile. Taveras is just 22 years old and is one of the top prospects in the Texas organization, but the Rangers may opt to use him in a limited role to begin the year to build up his confidence. He got a little better as spring went on, but he primarily hit leadoff for Texas in 2020, and he hit just .200 out of the leadoff spot.

Remember, speed is valuable, but you can’t steal first base, and if Taveras struggles to get on base, what is he going to provide for your team? Ignoring a subpar batted ball profile because they can or could steal bases is a recipe for disaster.

In the spring, Eli White has started to emerge as an option in Woodward’s outfield. In his first ten games in the spring, White was hitting .333 with one home run, two stolen bases with more walks (five) than strikeouts (four). Taveras was a trendy pick this year for double-digit home runs and stolen bases, with the hope that his batting average could improve, even slightly. However, it looks as if the draft community is souring on Taveras a bit, or at least admitting the fact that the spring performances of Taveras and White have embedded some doubt.

White has been more impressive in the beginning of spring and Taveras has displayed the same traits that made him struggle in 2020 (elevated strikeout rate) while simultaneously losing what gave him any sort of boost (elevated walk rate). Sure, his strikeout rate is better than his mark from 2020, but he recorded just one walk through his first 29 plate appearances.

If you want to get Taveras at a discount, you can dip your toes in the water. However, still be wary as his impression this spring has been less than favorable. The hard part about fading Taveras is that he does have the ability to be a difference maker in fantasy baseball’s most fickle category: stolen bases. At just 22 years young, if the team elects to go with White in the outfield, Taveras might open the year at an alternate site to get some more at-bats and establish a rhythm.

I won’t be buying him at his current price, but if he slips in drafts and my team’s offense is in a good spot to take on the batting average liability that is Taveras, in exchange for some upside in stolen bases, I’ll take a chance. Again, however, I refuse to pay full retail price, considering I don’t have a guarantee that he; 1. has an everyday role for the Rangers, and 2. breaks camp with the team. The latter is unfortunately becoming a potential reality.