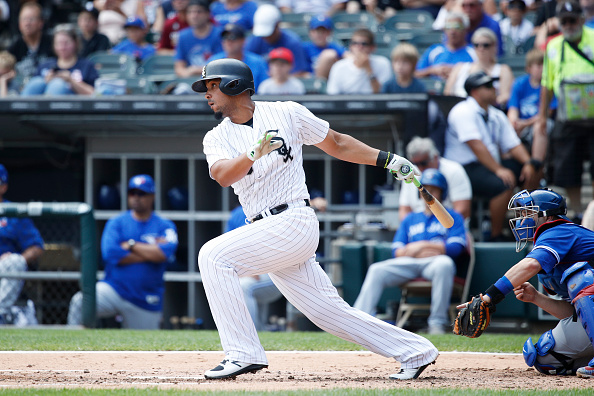 The SMART System and Rules of Engagement for 2018

There is a great debate out there in the fantasy sports community about whether strategy is really important.  Many terrific fantasy sports experts say “let the draft come to you.”  Rick Wolf and I respectfully disagree (albeit in a far more colorful fashion that begins with one of us scolding fantasy sports owners to “never ever leave their wingman” in classic Top Gun style and often morphing into both of us yelling “stop projecting”, “Count Chocola” and “hillbilly” as we channel John and Jeremy from Wedding Crashers or even “Ma, the meatloaf” -- but I digress).  Each time Colton & the Wolfman violate the SMART system or the Rules of Engagement, we regret it – a lot!  (see  Syndergaard, Noah below).  Admittedly it is not always easy to stay SMART but if you want to maximize your chances of winning a fantasy baseball title in 2018, play SMART and follow the Rules of Engagement (after all, now channeling Tom Skerritt’s Viper, those rules exist for your safety and the safety of your fantasy baseball team).

S in SMART Stands for Scarcity 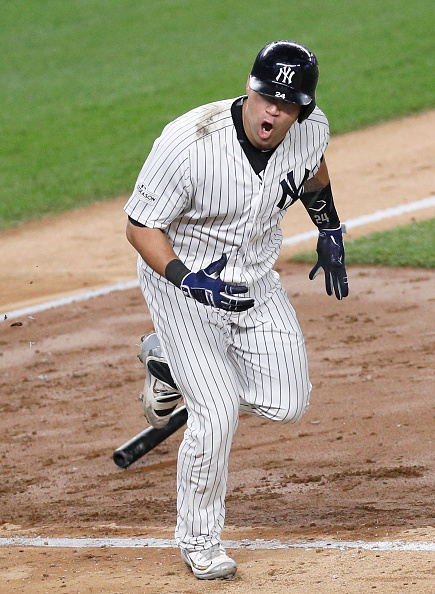 Each year, different positions in different formats are scarce.  The first step is to identify those scarce positions and adjust the prices that you pay for quality players at those scarce positions.  By successfully rostering a top-flight producer at a scarce position you gain an immediate advantage over your opponents and avoid bottom feeding in the waiver trough trying to find someone to give you anything at that weak position.  Warning:  paying for scarcity does not mean paying for mediocrity.  Rather, it means paying a scarcity premium for top quality players or proven performers.  Take a look at the Catcher position and please list how many players are projected to hit 30 HR and tally 90 RBI.  Gary Sanchez and …. crickets.  Ok, how about a catcher projected for 25 HR and 85 RBI.  Gary Sanchez and …. crickets.  So, how big of an advantage do you have if you roster Sanchez?   Ahh, Scarcity.  [Note, also check out 1B in the AL.  You have Edwin Encarnacion and Jose Abreu and then question marks like Miggy and Bird for health and Chris Davis for falling below the dreaded Mendoza line.  Think hard about anteing up for E5 or the consistent Pale Hose 1B)

M in SMART Stands for Management

Management means managing not only the draft but the entire season.  In the draft, that means religiously following the SMART system and the Rules of Engagement.  Specifically, it is critical to have a plan AND contingency plans.  One should never be so surprised by the results of a draft or auction that you are forced to deviate from your plan or one of your contingency plans.  Bottom line here is that if you make reasonable plans, you will never ever have to leave your wingman!  If you plan on paying $20 each for Mike Trout and Mookie Betts, well, that plan will not work.  You want both those guys, you better budget around 80 and stay close to that range.  You get the point.

Management in season means watching all the news and not being afraid to make a move to make your team better.  Specific steps to take:  1) track prospects that may be coming up; 2) search for spot starts for good teams and those in good parks against bad teams; 3) find the vultures – watch who managers bring in when the game is tied as they will get more cheap wins; 4) spot playing time changes by tracking injuries/poor play; and 5) watch who your competitors cut and see if the advanced metrics portend a rebound (i.e., if a player is cut because his ERA is way above his norm yet his BABIP is inflated and strand rate suppressed, you may have a waiver wire opportunity).

A in SMART Stands for Anchors

Before the draft, identify and target specific starting pitchers who will give you production in the four non-save categories.  As a general rule, it is safer to make substantial investments in hurlers who throw hard.  Simply put, those who throw gas get away with a lot more mistakes and are more likely to jump to their next level and thus yield a bargain.  Remember, do not invest too much in pitchers who have only done it once or worse, not at all.  How did it work out last year for those who invested $20+ in Kevin Gausman and his one good year starting? Answer:  4.68 ERA and a gross 1.49 WHIP.  [To be fair, I still like Gausman but not for big fantasy bucks]. He should not have commanded an anchor price in 2017 without the track record to back it up.  Anchor means a pitcher who is as sure of a thing as there is to start atop your rotation.  (Where have you gone Mike Mussina? A lonely fantasy sports nation turns its lonely eyes to you!)  Bottom line here: anchor doesn’t mean get the best pitcher in baseball as the cost is often way out of whack.

R in SMART Stands for Relievers

Get a steady solid closer on a good team that throws hard.  I know that many say do not pay for saves.  Ok, we do not agree.  Pay for your one closer and then speculate thereafter.  Make sure that you have at least two other relief pitchers that either get saves or are second in line – preferably on teams with shaky closers.  If you did that last year and rostered Felipe Riviero behind a shaky Tony Watson or rostered Brad Hand behind a shaky Brandon Maurer you got yourself a bargain second closer.

T in SMART Stands for Team

A very important part of the SMART system is to make sure that when in doubt, pick the player from a better team.  Good teams score more runs making it easier for hitters to get RBI/runs.  Good teams also provide more opportunity for pitchers to get wins/saves.  Plus, players on good teams do not get traded to be backups or set up men in July.

The Rules of Engagement

No rule is absolute but these will help in staying focused and making good decisions at the draft and all year long. 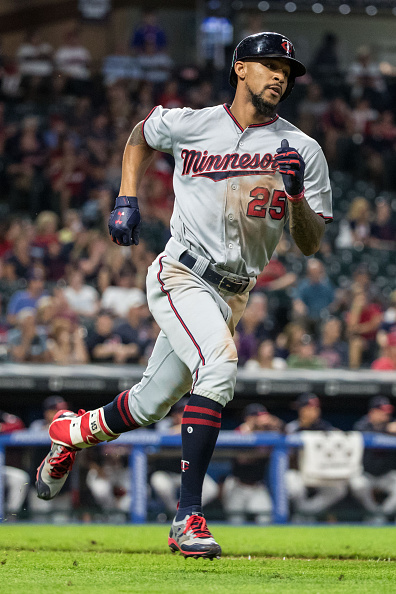 Age Matters:  When looking at your big money selections, pay for prime players (loosely defined as 26-32) with a proven track record.  Players without a track record may produce full value but why risk it?  Byron Buxton provides a perfect example.  Will he be a great player one day?  I think so.  Will it be in 2018?  Could be.  Should anyone have paid huge money in 2017 for Buxton, a guy who had never hit over .225 in any MLB stint?  Heck no.  For your mid-range investments, focus on young players with decent baselines and more than 1000 ABs or 300 IP but who have yet to reach full potential.  Those players made the majors at a very young age precisely because they are that talented.  Once they have the experience to go with that talent, they break out.  [Hint – watch Jorge Polanco.  He has over 800 MLB plate appearances at the tender age of 23.  He was ok last year hitting .256 with 13 dingers and 74 RBI however he should outproduce that baseline given the growth he showed by walking more, striking out less, making more contact and hitting the ball harder.]

Injuries Matter:  Do not invest heavily in players who have undergone off-season surgery or who are oft-injured.  Predicted medical recoveries do not always go according to plan.  It may sound simple but never forget that injury prone players get injured.  Note, this Rule does not say do not draft such players at all, it simply means do not pay full price.  For example, if you think a healthy Giancarlo Stanton will once again be worth $40+, do not pay $40 (he has exactly one 550+ AB season) but be prepared to pounce at $32-35.  At that price, you have serious profit potential and do not need full time health.  [Note, team Colton and the Wolfman violated this Rule and paid dearly in LABR with the ill-advised pick of Noah Syndergaard.  Shame on us!]

Big Money Free Agent Signings Matter:  Do not pay big bucks for free agents who signed big money deals to play in a new city.  Adjustments (to a new city, new teammates, new place to live, etc.) take a couple of months and as a result, year-long stats suffer.  [Note that the same rule as above applies.  Be ready to pounce at a discount on the big money free agents, just do not pay full freight.]

Throwing Gas Matters:  Do not invest anything but late round picks or small dollars in Kyle Lohse types (sorry Kyle).  Hard throwers are more consistent roto performers and easier to track.  Plus, Ks come from hard throwers with late movement.  Thus, a hard thrower is much more likely to become a K pitcher and one less reliant on his fielders.

Upside Matters:  All late round picks and low dollar amount players should be those with upside and not aging veterans that you could write down their max stats now.

Hype Matters:  Do not pay full value for predicted but as yet realized upside – instead pay for baseline performance with the indicators of a breakout.

Protection Matters – Ratio Protection That Is:  In the average categories (BA, WHIP, ERA and if you play OPS, OBP), do not take any players at high values that will cripple your ratios.  There is always another player there.

Home Park Matters:  You need to get a discount on Coors Field and Camden Yards Pitchers and PetCo Hitters.  Look at Ballpark Ratings for other examples.

Speed Matters:  Take one trick pony speed only guys if you get a huge discount.  It is better to fill your roster with players who run some so that you have a balanced approach to speed and do not become reliant on one player (usually one who does not help in other categories).

Conclusion:  The SMART system and the Rules of Engagement will not guarantee you a fantasy baseball title.  What they will do is provide critical structure to your draft preparation, actual drafting, trading and in-season management.  What the SMART system and Rules of Engagement will do is give you the best chance to be celebrating with a Yoo-Hoo shower this October!