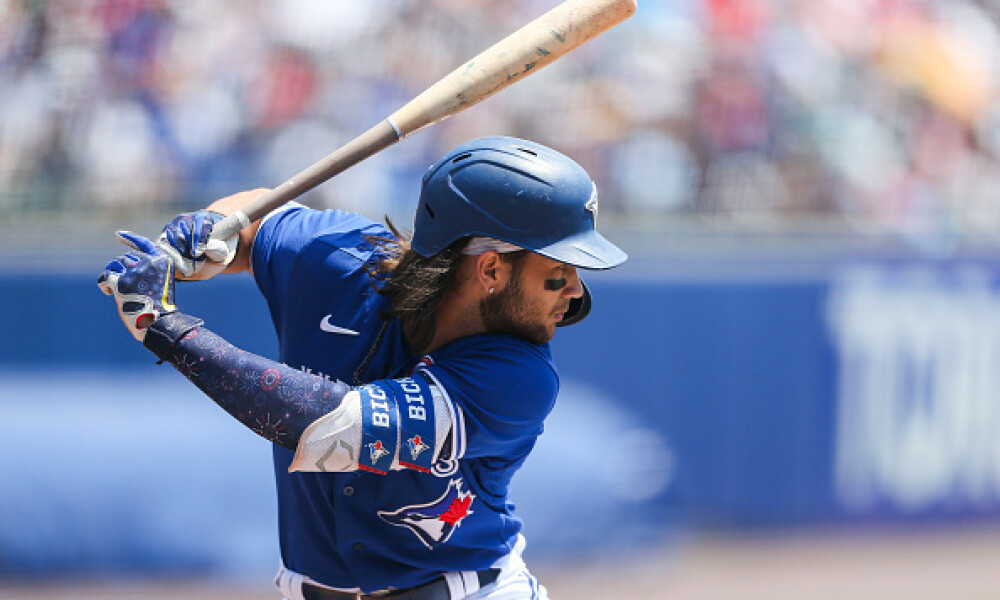 Bo Bichette, SS, TOR – One of the hotter hitters in the league right now against Keegan Akin?!?!?! YES PLEASE! Bichette has hit .435 in the last seven days with a 1.065 OPS and has eight multi-hit games in the last 13. Akin has been an unmitigated disaster lately as he has allowed 26 earned runs in his last five starts that spanned only 21 innings. He also has allowed seven home runs over those five starts. Bichette pulverizes left-handed pitching with a .354 batting average and a .983 OPS. He has two hits in five at-bats against Akin and they were both doubles and he is one of my favorite plays on the board.

Jesse Winker, OF, CIN – He has been in a huge slump, but got the day off on Tuesday and did come back with a hit yesterday. The Brewers will throw Adrian Houser tonight who was fine his last start but had allowed nine earned runs in his previous two starts and his ERA is just under 4.00. Pitcher versus batter isn’t the end all be all stat when it comes to DFS but this one you can’t ignore. Adrian Houser is Winker’s official slumpbuster. In 16 career at-bats Winker has nine hits against him (.563 average) and five of those nine hits have left the park. Winker hits a home run just about one every three times at bat against this pitcher. I am here for those kinds of odds.

Teoscar Hernandez, OF, TOR – I like to target Orioles pitching regularly anyway, but with this Blue Jays lineup against one of their worst pitchers, I can’t get enough! Hernandez had three hits last night and has five multi-hit games in the last ten. He has four at-bats against Keegan Akin and has two hits and they were a double and a home run. Like Bichette, he also hits really well against lefties with a .323 average and 1.042 OPS. In fact, five of Hernandez 11 home runs have come against lefties despite having 149 fewer at-bats against them. He has also hit seven of his 11 home runs away from home and we all know that Camden Yards is good for home runs.

Eric Haase, C/OF, DET – He is never going to win a batting title, but Haase has shown some nice pop since getting regular playing time. He has hit .300 in the last seven days with three home runs and 10 RBI. He will face J.A. Happ who has an ERA over 6.00 and has allowed four or more earned runs in four of his last six starts and 11 home runs in his last six starts. Haase has blitzed left-handed pitching with a .328 average and 1.126 OPS against lefties against a .186 average against righties. Eight of his 12 homers have come against lefties including a two-homer game on July 3rd coming off lefties Dallas Keuchel and Jace Fry. He won’t break the bank and has a chance for another great game.

Cedric Mullins, OF, BAL – This is more of a DK play, but he can be used on either. You’ll have to explain to me how he is $3,400 on DraftKings? He is still hitting over .315, just hit his 16th homer to go with 15 stolen bases and has two homers in the last three days. I know Blue Jays rookie Alek Manoah has been good more often than not but this price tag seems low. Mullins actually has faced him five times already and has two hits including a homer against the rookie. Mullins hits 20 points higher in average against right-handed pitching and 11 of his 16 home runs have come against righties as have all 15 of his stolen bases. It isn’t like he’s facing Jacob deGrom here, give me all of this value!

Ryan Mountcastle, 1B, BAL – Am I overestimating how much the Orioles hit Manoah? Perhaps. He did face them twice and had one good start and one disaster. The disaster was at Camden Yards which is also where tonight’s game is. In those two games Mountcastle faced Manoah four times and had three hits including two home runs. He has been on base in six straight games and has two doubles over that span. He is a far better hitter at home with a .313 average and .905 OPS in Baltimore as opposed to .199 on the road. Give me some discount on the home cooking and a rookie that Mountcastle has already had recent success against.

Niko Goodrum, SS, DET – We are deep diving on this one with a guy who is just coming back from a finger injury, but he has splits and a history with the pitcher that I am willing to roll with if you want to save money at shortstop. We have already detailed what a bum Happ has been this season. Goodrum’s average against lefties is 63 points higher than against right-handed pitching and last season he hit .333 against southpaws. He has owned Happ with seven hits in ten lifetime at-bats. He is super cheap and although he is just returning from injury if he is in the lineup, give him a look.