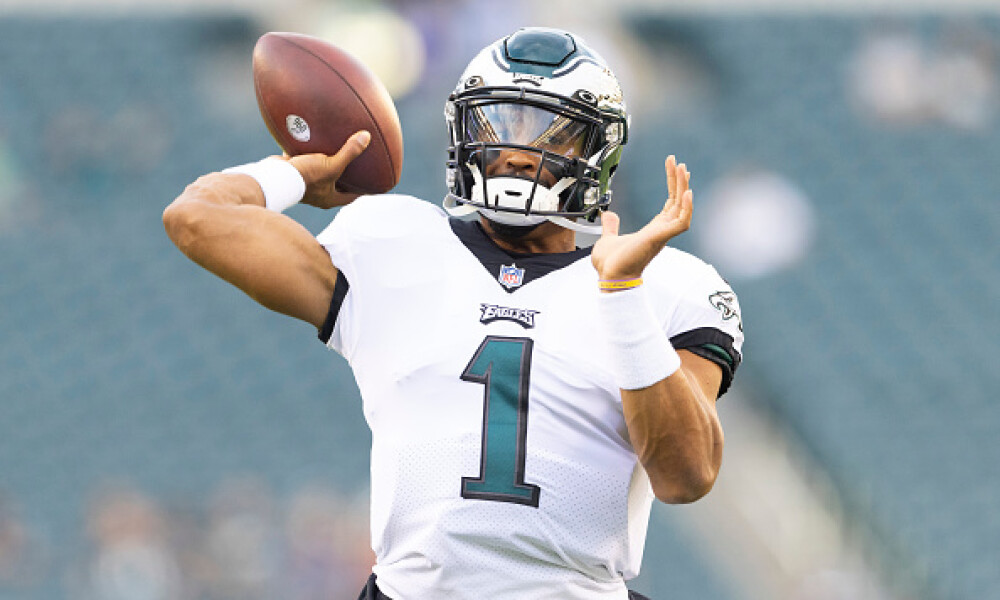 We made it. Week 1 of the NFL season is finally here. I’m not going to take too much more of your time before diving into the plays, but before I do, have you guys TRIED Yahoo! Fantasy yet?! If the answer is no….

WHAT ARE YOU WAITING FOR?

By following this link (https://fantasyalarm.com/yahoo) and using code “ALARM” and get a FREE $25 to play on Yahoo! Fantasy after making your first deposit!

Now, onto the value plays!

Jalen Hurts, PHI vs. ATL ($26) - I know it’s chalky, I know everyone is looking forward to playing Hurts this week against Atlanta, but it’s hard to ignore him at just $26 here. Atlanta allowed more passing yards than anybody else last season and they were 19th in pass DVOA as well. Something also of note is that Atlanta allowed the ninth most rushing yards to opposing quarterbacks, which we know is obviously in the cards for Hurts. Hurts started four games last year, had 60+ rushing yards in three and also had two games of 300+ passing yards. He has the upside to win us a tournament and in this spot, in this game, it’s one of those times.

Myles Gaskin, MIA vs. NE ($17) - For about one week, we were worried about Myles Gaskin’s fantasy upside because Malcolm Brown was getting first-team reps in a preseason game. Everyone has seemingly left him out for dead and we’d be silly to do that in this spot. Gaskin is a dual threat option out of the backfield going up against a defense that ranked 32nd in run DVOA a year ago. I mentioned Gaskin’s ability to be a dual threat option, he averaged 18.3 touches per game in 2020 and all we ever talk about is the lack of running backs that see hefty workloads. He didn’t start three of those games. Yes Brown is here to take *some* of the third-down work, but Brown played more than 50% of the snaps in LA just five times in 16 games last year and that was with Cam Akers not seeing the field to start the year. There isn’t great value at RB this week, but Gaskin provides you with a safe floor combined with upside as well.

Robby Anderson, CAR vs. NYJ ($14) - With all of the attention on DJ Moore’s potential breakout and the return of Christian McCaffrey, each and everyday Robby Anderson clocks in and out of work without a lick of notoriety. Do you know how many pass catchers saw more targets than Anderson last year? NINE. Do you know how many pass catchers had more receptions last year? NINE. Do you know how many pass catchers commanded a higher target share? FOUR. Inject all of that into our bloodstream and pair it with the fact he already has a rapport with Panthers QB Sam Darnold from their time in New York. The Panthers 24 implied points is the 10th highest mark on the slate and they get a Jets defense that ranked 28th in pass DVOA (Defense-adjusted Value Over Average) last year. The Jets are projected to start undrafted Isiah Dunn and Bryce Hall, the 67th ranked corner according to PFF, at CB in Week 1. Exploit this match-up at all costs.

DeVonta Smith, PHI vs. ATL ($17) - We love stacking our quarterbacks and receivers, so let’s take a look at DeVonta Smith and get him before his price skyrockets to a stratosphere that we’re not sure we can get to. The Falcons ranked 19th in pass DVOA last year and aren’t much improved in the secondary this year unless last year's first-round pick, AJ Terrell, takes the next step. Smith played all 26 of his preseason snaps out wide, so expect that to continue here and as previously mentioned, the Falcons outside corners are dust. Smith’s ability to stretch the field -- averaged 16.9 YPC in college -- can bite ATL here and we don’t want to miss the home run upside at this price point.

Anthony Firkser, TEN vs. ARI ($11) - What we should know about the Tennessee tight end room is that Firkser is going to run a lot of routes and Geoff Swaim is going to block most of the time we see him on the field. He blocked on 43% of his pass snaps last year and Firkser blocked on THREE total passing downs in 2020. This game has shoot out written all over it and with the pace Arizona plays at, it only benefits Tennessee’s offensive opportunities. In four of the six games Firkser played 40+ percent of the snaps last year, he saw at least five targets. We all want to jam Henry, Brown, and Jones into our lineups, but here’s cheap exposure to add to your stack.