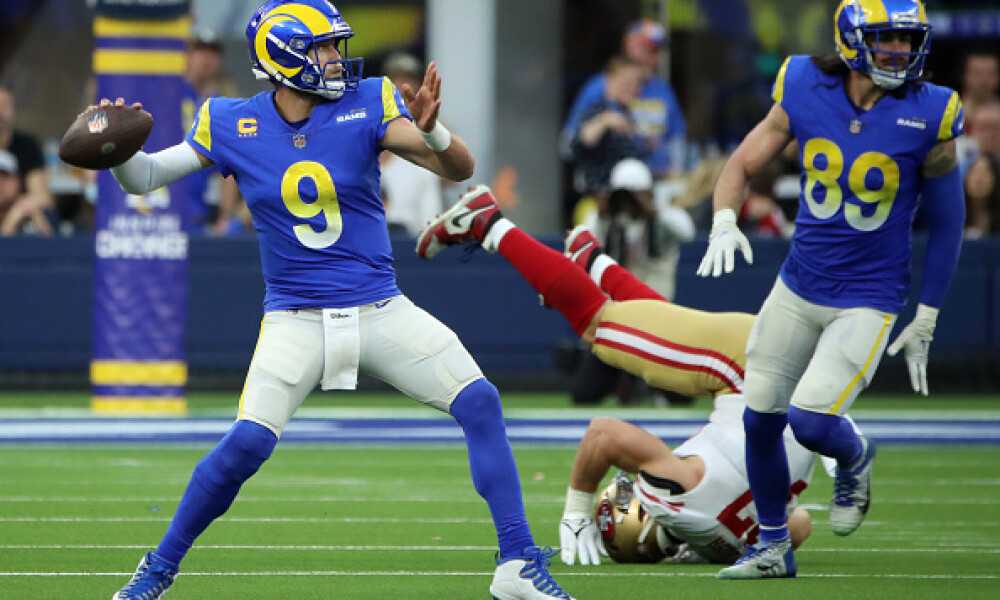 Welcome to the NFL Conference Championship Showdown Slate for the NFC!

For the third time this season, the San Francisco 49ers and Los Angeles Rams will do battle with the 49ers having won both meetings earlier this season. In fact, the 49ers have beaten the Rams in each of their last six meetings with Kyle Shanahan leading the way over coaching wunderkind Sean McVay. The last time they faced off was Week 18 where the 49ers needed the win to make the playoffs and waged a fierce comeback after being down 17-3 at the half.

San Francisco has established a fierce ground attack each time they’ve faced and use the run to eventually set up the pass via play-action. It takes the pressure off of quarterback Jimmy Garoppolo and their zone-blocking scheme helps to neutralize the size and strength the Rams have on the defensive line. On the other side, you can expect the Rams to target against the 49ers secondary early and, rather than try to chew the clock up with their ground game, keep their foot on the gas and stay aggressive through the air. The Rams went too conservative with the play-calling back in the second half of Week 18, a mistake you can bet they won’t make again.

Matthew Stafford, QB LAR – The defensive weakness of the 49ers is in their secondary, so look for Stafford to attack early and often as establishing an early lead should help reduce the amount of running San Francsico can do. Stafford has averaged 240.5 passing yards in their two meetings with three touchdowns and three interceptions in total. He is going to have to be very careful not to turn the ball over, but an aggressive passing attack almost ensures at least one. If he can limit the mistakes and Sean McVay doesn’t get too conservative with his play-calling, Stafford should produce solid totals.

Cooper Kupp, WR LAR – Is there any analysis really needed here? Kupp plays 100-percent of the snaps, he leads the team in targets, receptions, receiving yards and touchdowns and he’s Stafford’s first-look when he needs to move the ball downfield. San Francisco allowed the ninth-most fantasy points per game to the wide receiver position ad over the two games he’s face the 49ers, he’s totaled 240 yards and a touchdown.

Deebo Samuel, WR SF – He dominated the Rams in their first meeting, catching all five of his targets for 36 yards and a touchdown while also rushing five times for 97 yards and another score. It was the first time he had been used in the ground attack as anything more than just doing a random jet sweep. And wile you would have thought the Rams would have been more ready for him in the second game, Deebo managed four catches for 95 yards and ran the ball eight times for 45 yards and a touchdown. You can expect the Rams to try and target him more in their defensive scheme, but with so many weapons and pre-snap misdirection I’s gong to be difficult to contain him.

Elijah Mitchell, RB SF – Despite having Deebo sharing work out of the backfield, Mitchell has still averaged 23 carries over his last seven games. He’s found the end zone four times in that span and is routinely still in the mix for red zone touches. In their two meetings this season, he’s run for 176 yards on 48 carries (3.7 YPC) and should see his usual workload while the 49ers establish the run early. Likely a contrarian captain play.

Jimmy Garoppolo, QB SF – It’s tough to use Garoppolo in a showdown lineup because, more often than not, the juice isn’t worth the squeeze. He’s thrown for fewer than 175 yards in each of his last two games which isn’t exactly enticing to DFS players. However, he did throw for 316 yards during the 49ers comeback in Week 18 and he’s got three touchdowns to just two interceptions in the two games they’ve played this season. If the Rams jump out to another early lead, you can expect a little more throwing from Garoppolo, like we saw in Week 18. He just needs to avoid the turnovers.

Brandon Aiyuk, WR SF – Consistency hasn’t exactly been Aiyuk’s strong suit this season and in the match-ups against the Rams, it’s even more evident as he totaled 26 yards on three catches in their first meeting and then 107 yards on six catches in the second game. The Rams rank 14th in DVOA against the opposition’s No. 2 receiver, so if he sees volume, he should be able to produce. It’s just a matter of the game flow, so if you think the Rams jump out to another early lead, Aiyuk should be on your Showdown radar.

Jauan Jennings, WR SF – At his current price, it’s hard not to love Jennings, especially after his six-catch, 94-yard, two-score game against the Rams in Week 18. We’re not chasing those stats though, especially when you see how the defense matches up. When Jennings is usually on the field, he works out of the slot and while that is usually Jalen Ramsey territory, you can’t expect to see the Rams top cover-corner on the No. 3 receiver while Samuel, Aiyuk and Kittle run wild. He makes for a fantastic pay-down and allows you to get some bigger talent into your lineup.

Odell Beckham, WR LAR – Funny enough, OBJ had just two catches for 18 yards in each of the first two games against the 49ers and he failed to find the end zone in either. The first game was his first with the Rams so a limited showing was expected. The second game was a little more surprising, but since he’s been with San Francisco, he’s average six targets per game and has six touchdowns over 109 games. With Van Jefferson banged up, he could see a few extra throws come his way.

Tyler Higbee, TE LAR – He’s scored three touchdowns in the two games the Rams have faced the 49ers and while they rank fifth in DVOA against the tight end and don’t usually give up a ton of work to the position, McVay seems to have their number with Higbee. With Van Jefferson banged up and Beckham not having been all that productive in the first two meetings, you should probably give Higbee a look, especially after he saw the most targets on the team back in Week 18.

George Kittle, TE SF – While the Rams rank fourth in DVOA against the tight end, they are still allowing an average of almost 52 receiving yards per game to them and have allowed an average of 12.3 fantasy points per game to the position in a full-point PPR format. The volume has diminished over the last five games, but it did pick back up last week against the Packers and, with the game on the line, Garoppolo has his favorites.

Cam Akers, RB LAR – There’s a fair amount working against the Rams ground game as the 49ers front seven is rock-solid and they rank second in DVOA against the run. The speed of their linebackers also has them ranked fourth against running back pass-plays. The lean is Akers if you believe this is a strong back-and-forth game between the two as he saw tremendous volume last week and he’s the trusted pass-catcher. But if you feel the Rams jump out to that lead again and they want to rest Akers for the big game, you should pivot.

Sony Michel, RB LAR – The volume has decreased dramatically with the return of Akers, but if the Rams jump out to an early lead and they look to chew up some of the clock, they’re better off using Michel as a power-back rather than Akers, who was over-worked last week and struggled down the stretch of the game. He’s probably more of a dart-throw, but if the Rams look to save Akers for the Super Bowl, Michel could see some extra work.

Van Jefferson, WR LAR – We just can’t leave him out completely, but Jefferson is pretty close to being a dart-throw at this point, given the knee injury. He’s listed as questionable as of writing this, so you’ll want to check in on the inactives before the game starts. But he’s probably nothing more than a contrarian play to save some salary right now.

Kyle Juszczyk, FB SF – He’s the ultimate dart-throw as no one ever uses him, but the handful of targets Juszczyk sees and the times in which Kyle Shanahan gets him involved makes him worth the dart-throw when looking to differentiate yourself from the rest of the field. Even just a couple of catches for 20 or 30 yards helps him return value given the cost, but you need him to find the end zone, something he’s only done once this season, if you want to win with him in your lineup. I will say this – the Rams ranking 24th in DVOA against running back pass-plays, does lend some credence to the play.

Ben Skowronek, WR LAR – He’s someone to use if Van Jefferson is out for this game. Obviously, there’s a remote chance he can do something even if Jefferson is active, but it’s going to be tough for him to accrue offensive snaps unless they say Jefferson is going to be limited or on a snap count. Definitely a name to keep on the radar when building multiple lineups.