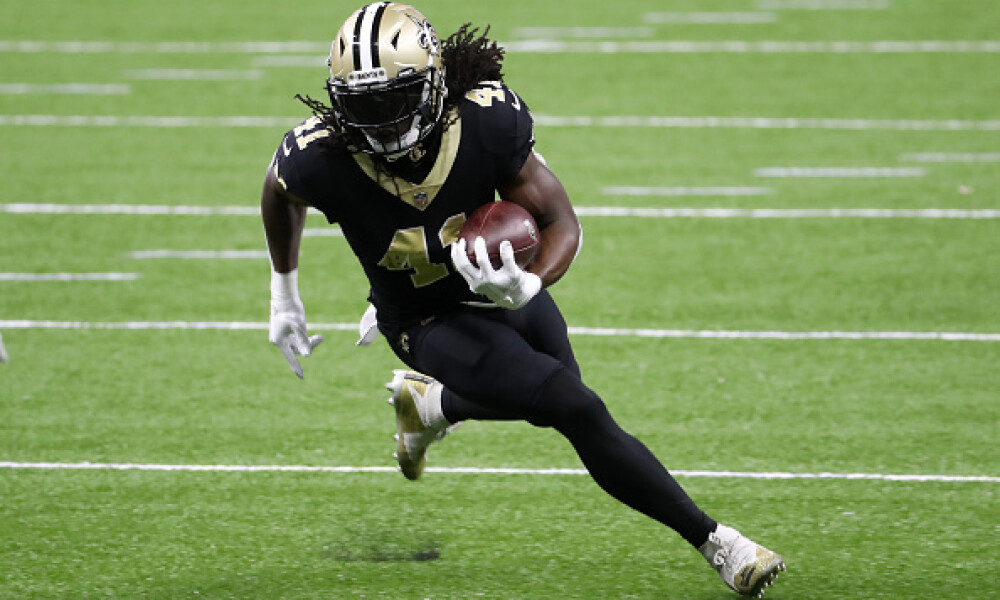 Tonight’s action between the New Orleans Saints and Seattle Seahawks is the perfect sum-up for the kind of sketchy week we’ve endured already. You’ve got rain in the forecast, Geno Smith instead of Russell Wilson and a Saints coaching staff that is limiting the number of throws their quarterback is getting. On top of that, both teams are at the bottom of the league in pace stats which means they’re slow and they don’t run as many plays. Still, this is a Showdown slate, so it doesn’t matter how much scoring there is, just so long as you have the guys who do score in your lineup.

Weather: light rain with temperatures in the low-50s; winds blowing south at 15mph

Alvin Kamara, RB NO – His workload has been strong and last week’s eight targets were certainly encouraging. Kamara is always a threat to do something big every time he touches the ball. With rain in the forecast and the Saints clearly limiting how much Jameis Winston throws, you can expect him to be a clear focal point and worthy of the top spot against a team that ranks 16th against the run and ranks 28th in DVOA against running back pass plays.

DK Metcalf, WR SEA – Without knowing exactly how the Seattle backfield unfolds, you can expect Metcalf to be worthy of the selection as he seems to be the guy Geno Smith is most reliant on in the passing game. The Saints rank fairly well against opposing WR1 and 2s, but Metcalf is one of those guys who transcends coverage match-ups.

Jameis Winston, QB NO – With seven touchdowns and just one interception over the last three games, Winston has proven to be quite efficient now that the team is limiting the number of throws he makes. His 279 yards in Week 5 were a season-high, so don’t expect much in the way of passing yards. If he can connect with his receivers, though, he should be a fairly low-owned guy in the top spot tonight.

Alex Collins, RB SEA – While Collins has been banged-up recently, he was able to put in a full practice Saturday and the team deemed him good-to-go for tonight’s match-up. It’s going to be a tough one as the Saints are allowing fewer than 80 rushing yards per game, but the wet surface could work in Collins’ favor as he knows where he is running while the defense is going to have to make adjustments on the fly.

Geno Smith, QB SEA – Well, the Seahawks aren’t just going to run the ball all night, are they? Smith was incredibly efficient last week and while he only threw for 209 yards and one touchdown, he had a 71.9-percent completion rate. He’s a work in progress, so perhaps he and his receiving corps spent some extra time working together this week.

Marquez Callaway, WR NO – After two weeks of garbage to open the season, Callaway has looked more like a team’s No. 1 receiver in two of the last three weeks. He found the end zone twice last week and if the rain doesn’t bother him or Winston too much, they can put together a nice effort against a soft Seattle secondary.

New Orleans Saints D/ST – It’s the No. 2 ranked defense overall and they rank fifth in takeaways this season. A rainy night and wet surface always lead to turnovers, so if the Saints are their usual opportunistic selves, they could bring you some points tonight.

Kenny Stills, WR NO – With Deonte Harris out, Stills steps in as the Saints’ No. 2 receiver in a soft match-up against a Seattle secondary that has allowed the sixth-most passing yards per game and has allowed 10 touchdowns through the air. Stills is normally a deep threat, so if the weather doesn’t play too much of a factor, you can expect Winston to take some downfield shots.

DeeJay Dallas, RB SEA – If Rashad Penny isn’t activated for the game, then Dallas could be a solid option as the Seahawks’ pass-catching back. He carried the ball four times and had five targets in Week 5. If he is placed in a similar role this week, he could be a nice contrarian play to add to your roster.

Freddie Swain, WR SEA – While the Saints coverage has been pretty strong thus far, the one area they seem to falter is in their slot coverage. C.J. Gardner-Johnson just isn’t that good in coverage and Swain has the speed and wherewithal to gain position on him. The saints are actually giving up more than 70 receiving yards per game to the slot, so Sain could be in for a nice night.

Rashaad Penny, RB SEA – There’s a good chance Penny actually slots in as the No. 2 behind Collins tonight if the Seahawks officially add him to the roster. He’s been activated off IR and there isn’t a whole lot of faith in the back-up corps. With Collins banged-up and the field wet, if Penny is the No. 2, he could offer great value.

Devine Ozigbo, RB NO – More possibilities with a wet field as Ozigbo could end up with some extra work if the Saints don’t want to overuse Kamara and put him at risk on a wet field. He’ll return value if he gets into the end zone, so if you’re playing multiple lineups and want to throw another dart, he could be your guy.