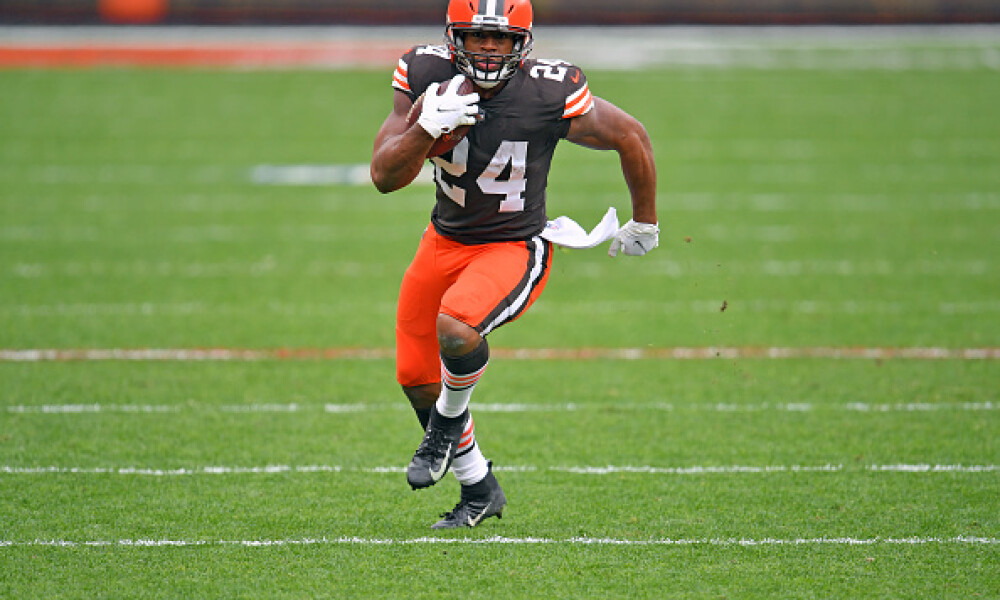 The NFL schedule-makers probably thought this could be a battle for the AFC North title, but neither the Cleveland Browns nor the Pittsburgh Steelers produced like we had hoped. The Browns can definitely blame it on some bad luck with injuries and COVID outbreaks. The Steelers, well, they’re in dire need of a new quarterback and offensive line. But both offenses can still put up some points.

The Steelers escaped with a 15-10 victory the last time they met this season, but the Browns had won the previous two and the scoring was fairly strong. When building a DFS showdown slate, you can probably expect the majority of points to come from the running games of both teams, but injuries and more COVID outbreaks could make the passing attacks a little more interesting for tonight’s action.

Weather: clear skies with temperatures in the high-20s and winds blowing WNW at 6 mph

Nick Chubb, RB CLE – The Steelers run defense has been obliterated in recent weeks, allowing an average of 190 rushing yards per game over their last three. Chubb is an absolute beast and is coming off a 17-carry, 126-yard game with one touchdown against Green Bay and has touchdowns in back-to-back games. He should have a fierce game tonight, especially with the Steelers dealing with COVID issues at linebacker.

Najee Harris, RB PIT – The Browns run defense has been stingy this season, allowing just 105.9 rushing yards per game, but the Steelers need to establish the run early if they want the passing game to click. Harris also picks up tremendous value in the passing attack as he is usually good for 3-to-5 catches per game and some yardage on top of that. He had 26 carries for 91 yards and a score the last time these two teams met.

Diontae Johnson, WR PIT – It’s all about the volume for Johnson who has seen double-digit targets in 10 of 14 games this season. The Browns are unlikely to have Denzel Ward shadow him, but Greedy Williams on the other side presents a tough challenge as well. However, with both starting safeties out, the coverage help in the middle of the field could be suspect.

Jarvis Landry, WR CLE – A lot could hinge on who the Steelers use as their slot-corner throughout this game. If it’s Terrell Edmunds, Landry will have a fight on his hands, but if Tre Norwood gets used, Landry should school the rookie and rack up some catches. He’s averaged nine targets per game over his last three and has one 100-yard effort and one touchdown in that span. He could make for a nice play tonight.

Pat Freiermuth, TE PIT – The Browns may rank ninth in DVOA against the tight end position, but they’re allowing the 11th-most fantasy points per game to them. That screams red zone work and that just happens to be Freiermuth’s specialty. He’s healthy again and ready to get back at it. With six touchdowns and 14 red zone targets over his last eight games, he could even warrant some captain-seat consideration.

Chase Claypool, WR PIT – He’s been quiet over the last two games, but Claypool has still averaged just under seven targets per game and should see close to that again today as the Steelers could be throwing in the second half if their run defense gets mauled by Chubb. He’s also a threat near the red zone when it comes to Mike Tomlin’s weird penchant for jet sweeps inside the 10-yard line.

Ben Roethlisberger, QB PIT – Unless Harris and the offensive line dominate the line of scrimmage, Big Ben is going to have to throw and take second-half matters into his own hands. His last two games have been bad for fantasy, but the two prior to that were rock-solid. If he can throw for 250 yards and two touchdowns, he’ll return the value you need.

Baker Mayfield, QB CLE – The Browns have blamed a shoulder harness on Mayfield’s recent struggles, so if he’s wearing it again tonight, be wary of it. He’s thrown five interceptions to just four touchdowns over the last two games and the team will rely on Chubb pretty heavily early on. Hopefully that will open up play-action down the field, but only use Mayfield if setting multiple lineups and you want to be a little contrarian.

Donovan Peoples-Jones, WR CLE – This guy would be absolutely amazing if he could learn to hold onto the ball. The drops have been killing his value lately and, as such, he’s lost some snaps in recent games. He’s got a tremendous skill-set and can very easily dazzle down the field, so don’t rule him out.

Anthony Schwartz, WR CLE – He tends to be more of a deep threat than someone the Browns rely on across the middle to move the chains, but if he continues to see targets because Peoples-Jones keeps dropping the ball, then we could see some downfield heroics.

Austin Hooper, TE CLE – He’s settled in as the team’s No. 1 tight end and he leads them in snaps, routes run and receptions. Hooper tends to be a chain-mover for the Browns, but he does have three red zone targets and one touchdown over his last two games.

David Njoku, TE CLE – As the second tight end, Njoku doesn’t see the targets you want for your lineup, but he does manage to get a decent amount of red zone work and has three touchdowns on the year.

Harrison Bryant, TE CLE – With a lack of receivers on the team, Bryant seems to always find work even as the No. 3 tight end. He’s only got three catches for 12 yards over his last two games, but two of those three grabs went for touchdowns. The ultimate dart-throw here.

James Washington, WR PIT – If you really want to throw a dart, then Pittsburgh’s receiving corps has a possibility here in Washington. He doesn’t see much in the way of targets, but we’ve seen Big Ben air it out downfield to take a shot and sometimes, Washington makes a spectacular grab.