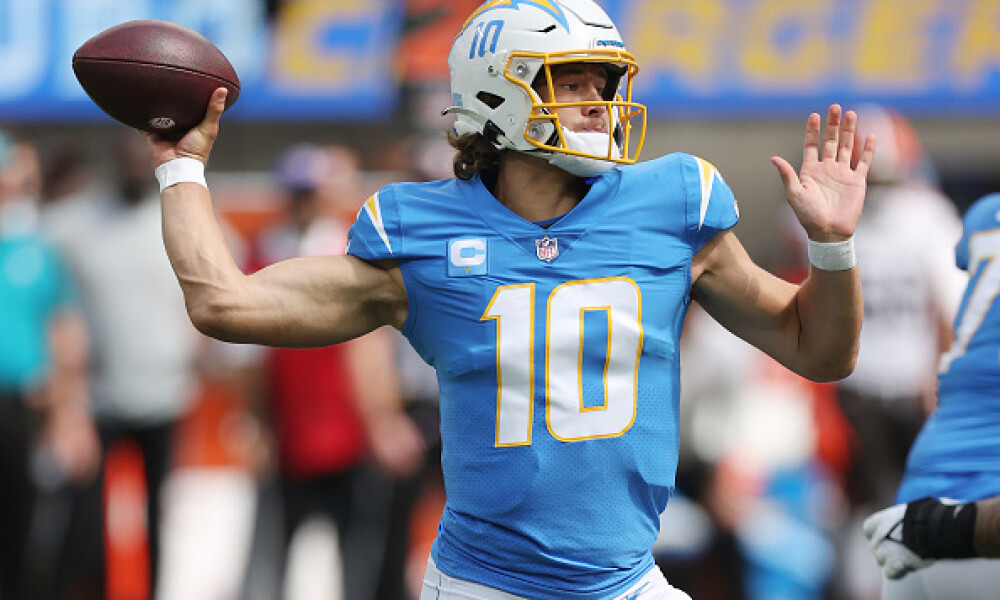 While the NFL remains buried in COVID cases, DFS players and fans alike are still being treated to a fantastic, marquee match-up as the Kansas City Chiefs head to Los Angeles to face the division-rival Chargers in a fierce battle for the AFC West title. The Chiefs have a one-game lead in the standings, but they’ve already lost one game to the Chargers back in Week 3 and a second loss would crush them with regard to tiebreakers. While Kansas City has not looked like the powerhouse we are used to seeing, they’ve now won six-straight games where their defense has been amazing and limited the opposition to an average of just under 11 points per game.

Meanwhile, the Chargers have won their last two games and have posted at least 37 points in three of their last four games. Quarterback Justin Herbert is the first player in NFL history to throw for at least 30 touchdowns in his first two seasons in the league and has now thrown for more than 300 yards in three of his last four starts.

We do have some COVID cases affecting both teams and you can find which players are on the reserve/COVID list by checking the Fantasy Alarm NFL COVID Tracker. The 52.5 over/under indicates the top skill players aren’t going to be affected and we should see an extremely exciting game tonight which is perfect for DFS showdown contests.

Weather: N/A with a roof over the top

Justin Herbert, QB LAC – The guy has been money in the bank all year long and always warrants consideration for the top spot. He’s got a full arsenal of pass-catching weapons, has thrown for at least 300 yards in three of his last four starts and has 11 touchdown passes in that span. In a projected shootout, it’s hard not to go with the guy who threw for 281 yards and four touchdowns without an interception the last time they faced.

Patrick Mahomes, QB KC – It has definitely been an up-and-down season for Mahomes, but just when people are ready to jump off the Chiefs bandwagon, he has a monstrous game. Granted, these are the Chargers and not the Raiders, but Mahomes still threw for 260 yards with three touchdowns against the Chargers back in Week 3.

Travis Kelce, TE KC – Kind of an easy and somewhat chalky call here, but you can’t argue against it, can you? The Chargers rank 22nd in DVOA against the tight end and are allowing the sixth-most fantasy points per game to the position. Kelce dominated the Chargers in Week 3, hauling in seven catches for 104 yards so expect Mahomes to seek him out.

Tyreek Hill, WR KC – He’s been quiet over these last three games and only had five catches for 56 yards the first time these teams squared off. But Hill is an explosive player and is always a danger to break a long touchdown catch. Mahomes looks for him downfield all the time so one mistake by the Chargers secondary and he’s off to the races.

Austin Ekeler, RB LAC – It’s a short week and he may be dealing with an ankle issue, but the latest reports say that Ekeler is expected to play and we’re in on him against a team that ranks 20th against the run in DVOA and 27th against running back pass plays. Ekeler racked up over 100 all-purpose yards with six catches and a receiving touchdown back in Week 3. The Chargers will try to keep his legs fresh, but he’ll be heavily involved in this game plan.

Keenan Allen, WR LAC – He missed last week’s game after landing on the COVID list, but Allen was activated early this week and should be good to go. Will he be sluggish? COVID affects everyone differently so it’s hard to tell. What we do know is that he is Herbert’s security blanket, so he’ll see plenty of targets come his way.

Mike Williams, WR LAC – With Allen back, Williams won’t see some of the heavy coverage he got last week and he’s got a nice match-up with Mike Hughes who may be a decent cover guy, but he loses the physical battle to Williams regularly as he is six inches shorter and gives up 30 pounds to Williams. Speed-wise they’re close, so if Williams gains position or separation, we could see some fireworks.

Clyde Edwards-Helaire, RB KC – He doesn’t see a world of volume but you cannot ignore the fact that the Chargers are allowing the second-most rushing yards per game (140.7) and have allowed 19 rushing touchdowns on the season. CEH has three touchdowns in his last three games and is also getting more involved in the passing game with eight catches in those three games as well.

Darrel Williams, RB KC – He’s the complementary back to Edwards-Helaire but he sees about the same in target share as Mahomes has routinely hit him on some designed screens over the past few games. Given the weakness against the run for the Chargers, he becomes an interesting contrarian play but keeps a share of the Kansas City ground attack.

Jared Cook, TE LAC – He comes into Thursday night with no injury designation and faces a team that ranks 17th in DVOA against the tight end and gives up at least 13 fantasy points per game to the position. He finally saw more red-zone looks last week which makes him an intriguing asset, especially if Allen needs to take some snaps off in this game.

Byron Pringle, WR KC – The Chiefs don’t really throw to too many other guys, but the fact that Pringle has now averaged three targets over the last four games and has seven catches and one touchdown in that span, means he’s getting a bit more attention while defenses focus on Kelce and Hill.

Joshua Palmer, WR LAC – Should Allen be limited at all, Palmer will take plenty of snaps out of the slot and catch the eye of Herbert, much in the way he did last week. Palmer is versatile enough to line up on the inside and the outside so expect to see him on the field for plenty of three-receiver sets.

Jalen Guyton, WR LAC – Just on the borderline of dart-throws as Guyton is a deep threat who occasionally comes up with a big touchdown. He’s scored in each of the last two games, though which is why he looks  little better than just a dart throw.

Mecole Hardman, WR KC – He seems to have slid behind Pringle on the target share in recent weeks, but Hardman is always a threat given his speed. He had three grabs for 33 yards and a touchdown in Week 3 against the Chargers, so why not?

Donald Parham, TE LAC – He doesn’t see the targets that Cook sees, but he also seems to see more red-zone work than his partner at the position. He won’t gain much in yardage but if he can sneal into the end zone, he’l pay off in spades.