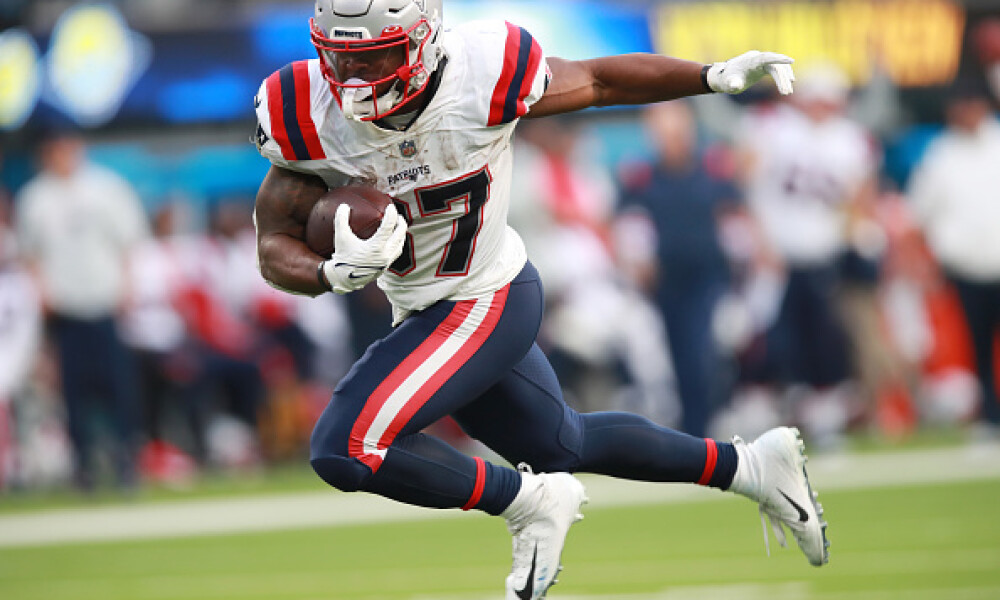 Week 11 of the NFL season kicks off on Thursday night with a pair of teams who saw very different results last week. The Atlanta Falcons are back at home, licking their wounds after taking a vicious beating in Dallas as the Cowboys steamrolled them 43-3 in a game that was never close. They lost one of their top weapons in running back/wide receiver hybrid Cordarrelle Patterson who suffered an ankle injury and is unlikely to play here on the short week. Meanwhile, the New England Patriots absolutely wrecked the Browns 45-7 as rookie running back Rhamondre Stevenson paved the way with a season-high 20 carries for 100 yards and two touchdowns. Will the short week be enough for both teams to play at full strength or should we be concerned? And if we are to be concerned, which players will make for the best options in a Showdown slate lineup?

Damien Harris, RB NE – After a heavy workload for Rhamondre Stevenson on Sunday, the expectation is that Harris, who received medical clearance earlier in the week, will go back to shouldering the load in the ground attack. The Falcons are allowing the fifth-most fantasy points to running backs this season thanks to an average of 122.1 rushing yards allowed per game and 10 rushing touchdowns allowed on the season.

Mac Jones, QB NE – While the passing yards haven’t been abundant lately, Jones has been incredibly efficient with six touchdown passes to just one interception over his last four games. We may not know exactly who Bill Belichick will feature in this offense, but everything revolves around Jones. With the Falcons allowing the fourth-most fantasy points to the quarterback position, he’s worth the look in the top spot.

Tajae Sharpe, WR ATL – Trying to find a weakness in the Patriots defense can be a daunting task and with the ground game featuring some unsavory options right now, we’ll hope the passing attack can do some work. New England ranks 22nd in DVOA against the opposing No. 2 receiver and that role tends to land with Sharpe. It’s the contrarian play to use if you believe Belichick will focus on shutting down Kyle Pitts.

Matt Ryan, QB ATL – If the Falcons ground game struggles, Arthur Smith will turn to Ryan and the pass pretty quickly. Ryan may not have to sling the rock for 300-plus because the Patriots are running away with the game, but he’s definitely going to have to have a strong effort to keep them in it. Remember, opposing quarterbacks are held to a 75.7 passer rating against the Patriots, so this too may be a bit of a contrarian play…like Jimmy G on Monday night.

Jakobi Meyers, WR NE – He got his first taste of the end zone Sunday and Meyers is certainly ready for more. The Falcons are allowing the 10th-most fantasy points to wide receivers and rank 26th in DVOA against the opposition’s top target, allowing close to 72 yards per game on average to them.

Kyle Pitts, TE ATL – He’s easily the top receiving threat for the Falcons, but as we all know, Belichick does a fantastic job scheming against the opposition’s top weapon. The Falcons are going to have to get very creative with how and where they use Pitts if he is going to find success in this one. Likely another contrarian pick, based on the cost.

Hunter Henry, TE NE – Atlanta ranks 17th in DVOA against the tight end and are allowing close to 12 fantasy points per week to the position. That number is right in Henry’s wheelhouse as he doesn’t usually post more than 40 receiving yards per game, but with seven touchdowns in his last seven games, you know he’s an obvious red zone threat.

Mike Davis, RB ATL – With Cordarrelle Patterson being a game-time decision, the expectation is that Davis should shoulder the bulk of the load this week. Arthur Smith said Wayne Gallman’s heavy workload on Sunday was a direct result of the blow-out and the short week. That should mean he was saving Davis for this game should Patterson be out or limited.

Nelson Agholor, WR NE – He’s seen a lot of snaps, though that hasn’t exactly turned into a heavy dose of targets. But that’s the case for most of the weapons on New England. You never know where Belichick is going to direct his team. Agholor has a favorable match-up against Fabian Moreau so he s=could be good for some quick strikes downfield early.

Rhamondre Stevenson, RB NE – If you don’t believe the Sunday workload or Damien Harris’ presence will affect the rookie, then getting Stevenson in as a contrarian play might work. He could handle some of the short-yardage and goal-line work if he’s getting touches throughout the game.

Olamide Zaccheaus, WR ATL – He’s been used as a deep threat for the most part, but we’ve seen a few quick strikes to him when the Falcons are down near the goal line. If you believe the Falcons will need to throw excessively and Pitts is going to be blanketed in coverage, he’s as good a dart as any.

Brandon Bolden, RB NE – Let’s not forget about Bolden, especially if Stevenson is limited to alleviate wear-and-tear following Sunday’s workload. He may be questionable, but if Bolden is active, you know Belichick finds a way for him to get work.