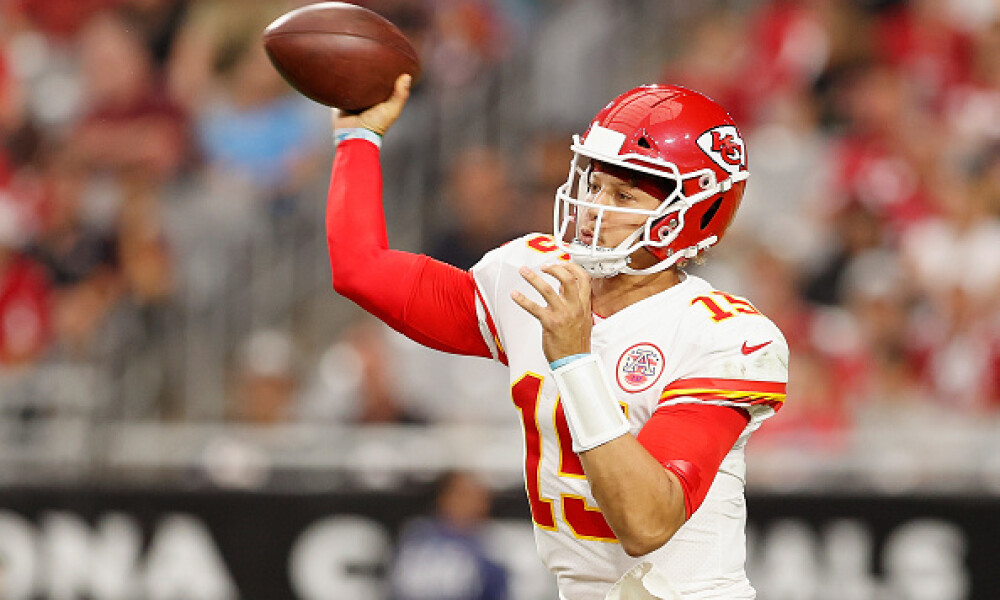 The 2021 NFL season is just a few weeks away which means there is no better time than now to check out the great things happening over on Monkey Knife Fight!

Not familiar with Monkey Knife Fight?

Let me break down one of the more exciting platforms to play on during the NFL season! With Monkey Knife Fight you are not playing against the professionals instead you are choosing between a variety of season-long different contests with different payout multipliers in which all you need to do is pick the player or players that you think will score above or below the displayed total whether that be fantasy points, specific stats such as passing yards, rushing yards, receiving yards and more.

Heading into the 2021 NFL season Monkey Knife Fight is offering some season-long totals for NFL players, and I am going to dive into some of my favorites to help you win your contests come season's end!

So what can you do with that extra $100 MKF is giving you? We have some ideas, read on…

The corollary between overall team success and passing volume can be confusing in this league.  You’d think that a better team = more yards.  But the real formula is actually more like “good offense + bad defense = more yards”.  There’s no better example than the 2004 vs. 2005 Colts. In 2004 they threw for 4,623 yards and Peyton Manning had 49 TD passes. But that same team allowed almost 6,000 yards on defense and 28 TDs.  They were often involved in shootouts, most of which they won, so they went 12-4.  Great for fantasy football and passing production.

The following year in 2005 that Colts team was even better - including the offensive line and defense. So they actually won more games and went 14-2.  But since games were easier, Peyton only threw for 3,747 yards and 28 TDs.  He simply didn’t need to throw any more than what they needed to win.  We saw a similar phenomenon with Mahomes himself throwing for 5,000 yards and 50 TDs in a 12-4 season in 2018 then the following year they went 14-2 and didn’t throw nearly as much.  They didn’t have to.  The Chiefs made drastic positive additions to the offensive line with Joe Thuney and Orlando Brown as well as some much-needed improvements to the defense so I expect this team to cruise a bit more and lean into the first-round pick Clyde Edwards-Helaire rather than engaging in shootouts.  The game scripts might not call for heroics and you have to remember that, with this line of ~5,000 yards, you are basically betting that Mahomes leads the league in passing and potentially sets a new record for passing yards in a season.

In Tom Brady’s first year with the Buccaneers, he experienced some growing pains - which is natural for any quarterback in a new offense, even legendary ones.  This year they became the first super bowl winning team to bring back all twenty-two starters from the previous season.  We just talked about the narrative with Patrick Mahomes regarding the correlation between shootouts and passing totals and now this entire team has another year under their belt coming off a championship win.  The goal is to be healthy for the playoffs and give yourself a shot to repeat.  We hate to even suggest that Tom Brady would take his foot off the gas at any point or even consider wear and tear given his tenacity but, if there were ever a time to consider whether a team wants their quarterback throwing a ton and running up scores when they can avoid it, it would be with a 44-year-old quarterback coming off of knee surgery.  Over 4,500 yards is a tough bet for anyone and that becomes especially true for a player his age on a team that should coast through many of their matchups. They have multiple capable running backs on the roster to close out some of these games.

Think about what the New Orleans Saints do.  Alvin Kamara has had 81, 81, 81, and 83 receptions in his four seasons. But he’s never had more than 200 carries or 1,000 yards rushing.  The short pass game is baked into the “run game”. And with that, the quarterback also gets those yards to his credit.  Well, new Chargers offensive coordinator Joe Lombardi is coming over from New Orleans and he brings that philosophy with him.  In his short stint with the Lions in 2014, Lombardi threw to the running backs over 150 times and the top two wide receivers combined for 272 targets.  Now Lombardi grabs Jared Cook and brings him along to a team with Austin Ekeler, Keenan Allen, Mike Williams, and third-round pick Josh Palmer.  I could easily see this team going over the pass yard total if they are using short passes in situations where other teams might be running the ball. And that’s the coach's MO with the perfect weapons to do it.

The Buffalo Bills want to spread the offense out.  The Bills used three or more WRs on at least 88% of their snaps last year which is the highest of any team in the league. They also ran the second most four WR sets of any team last year (15%) behind only the Cardinals.  And, had wide receiver John Brown not missed seven games, that number could have easily been higher.  This year they cut John Brown (who signed with the Raiders for $3.75 million) and they upgraded by paying Emmanuel Sanders $6 million to line up opposite Stefon Diggs.  Josh Allen and Patrick Mahomes could be closer than people think in terms of pass attempts so why is the line for Josh Allen set nearly 500 yards lower than Mahomes?

This is probably one of the easiest ones on the list for me.  First off, you already have the quarterback with the record for pass attempts in a season with 727.  In a 16 game season, no one else has even thrown over 700.  Now you pair him with Sean McVay, one of the league’s most innovative, young quarterback whispering coaches.  The Rams already had Cooper Kupp, Robert Woods, and Van Jefferson but Stafford has a big arm (seventh-most air yards in the league last season) so they added additional deep threats in DeSean Jackson and rookie Tutu Atwell.  If that wasn’t enough, star running back Cam Akers tore his Achilles and is done for the season.  Darrell Henderson and Sony Michel are fine options but they aren’t Cam Akers level talent so the Rams are likely going to have to take to the skies this season.

Dalvin Cook is a special talent.  You’d think that maybe this line would be a slam dunk considering he rushed for more yards than that in 2020 in only 14 games.  But his absurd 312 carries in 14 games last year is not a sustainable pace, especially considering he only had 250 carries in 14 games the year prior.  And the fact that we are even talking about 14 games in back-to-back seasons and not 16 is one of the biggest concerns for Cook - since entering the league, Dalvin Cook has NEVER played a full season.  So there will be a lot of fantasy gamers looking at this line and dividing it by 17 when history tells us that’s not likely to be the case.  Simply betting on Dalvin Cook to miss time is a decent bet but when you factor in personnel. The Bengals poached their left tackle (who the Vikings replaced with a rookie), they lost blocking tight end Kyle Rudolph, and they added Kene Ngwangwu, who has impressed in camp, to go along with Alexander Mattison.  On top of all that, there has been growing pressure around the team to expand the pass game so we simply find it difficult to be on Dalvin Cook to hit on that total.  This isn’t fantasy football where you can just draft his handcuff and carry on - if Dalvin goes down for the 5th time in a row then you lose.

Let’s think about this in typical fantasy football fashion.  Picking the guy who will be the number one overall RB in fantasy football is incredibly difficult.  In fact, over 20 years, only Priest Holmes has done it twice.  Not the only RB to do it in back-to-back seasons, just to be the top overall RB in fantasy in two different seasons.  The way these lines are set up, you are essentially betting that Derrick Henry not only stays healthy the entire year but he essentially leads the league in rushing again.  A guy who, when factoring in playoffs, has had 782 carries over the last two seasons.  And is now 27 years old.  The team lost run-blocking tight ends MyCole Pruitt and Jonnu Smith and they gained a stud weapon in the pass game in Julio Jones so, even if Henry does stay healthy all year, they may not need to lean on him as much as they have in the past.  With Henry having a total O/U that is nearly 200 more yards than anyone else on this list, I see no reason to bet on him to defy the odds at the high end of the spectrum when there are safer bets for good runners on here.

This one might seem counterintuitive to some fantasy gamers.  Of the three running backs here, this one shares a backfield.  So why then is this the over bet while the other two are under?  The answer of course is in the narrative and the numbers.  Kevin Stefanski is one of the most run-heavy coaches in the league.  He not only deploys two tight end sets often but he used more three tight end sets than any team in the league in 2020.  In 2019, in games where both Chubb and Kareem Hunt played, Chubb averaged 18 carries a game and 5 yards a carry.  In 2020 when both running backs played, Chubb averaged 16.7 carries a game and 5.6 yards per carry.  Even if we want to be conservative here and call it 16 carries per game from 2020 and the 5 yards per carry from 2019, Chubb would hit the over.  Chubb has averaged 5.2 yards per carry for his three-year career and there’s no indication that Kevin Stefanski wouldn’t give him 15-20 carries per game so we are much more likely to take Chubb at 1,347.5 vs. Henry at 1,550.5.

This bet becomes easier for us with us putting our money on Josh Allen.  Stefon Diggs is the de facto number one wide receiver in this offense.  He was last year when he had 127 receptions on 166 targets for 1,535 yards.  And that was in his first season with Josh Allen, in a brand new offense, operating with no pre-season.  1,525 yards in 16 games with a brand new system and QB and now this line is 1,375.5 yards in a 17 game season with him established in the offense.  Sure, they brought in Emmanuel Sanders but that’s more of a lateral move from John Brown compared to say, the Titans bringing in Julio Jones.  Stefon Diggs already thrived as the focal point of the pass attack facing top corners last year and we already bet on the over for the Bills passing game with Josh Allen - that’s not happening unless Diggs also hits the over on the receiving end.  We think it happens.

In the Patrick Mahomes section,, we talked about why we believe the Chiefs offense does not need to be so gung-ho in the passing game.  Since this is a parlay situation and the goal is to hit all ten, we aren’t going to bet against ourselves here suggesting earlier that the Chiefs might not pass as much as expected but that Tyreek Hill will set a career record in receiving yards.  I know there is an additional game this season but Tyreek Hill has had his share of injury scares and there are already reports that he’s battling knee tendonitis.  On top of that, the division foes in Denver, Los Angeles, and Las Vegas have stout secondaries plus shut down guys like Jaire Alexander and James Bradberry are also lurking on the schedule.  We are leaning into the under for the Chiefs guys, just as we are rolling with the over for both Bills.