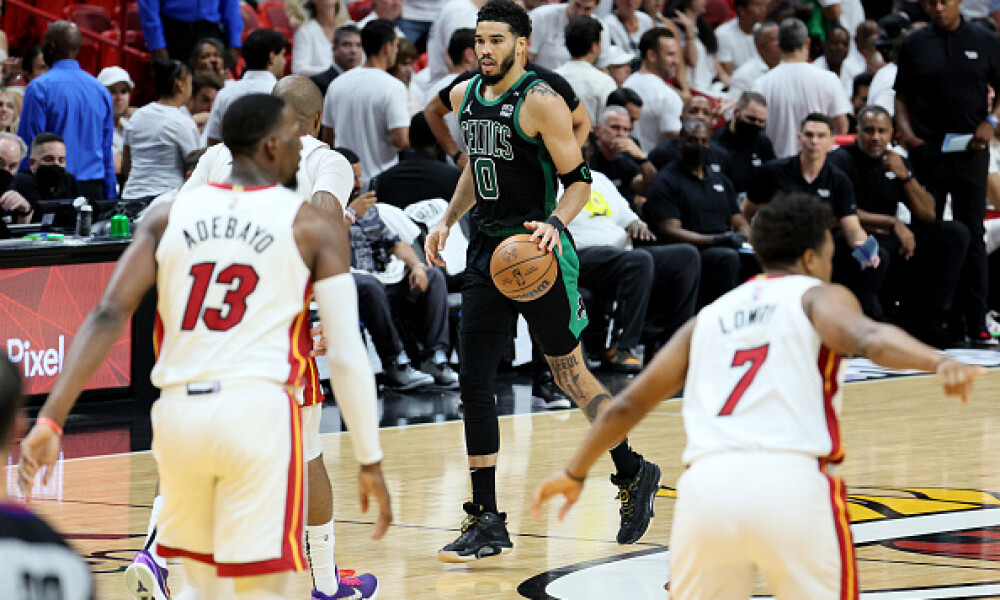 It’s very hard to believe that the Eastern Conference Finals of the NBA Playoffs will be extended to Sunday. The Boston Celtics have the Miami Heat on the ropes and the Heat’s offense just hasn’t been strong enough and the only way the Heat survive tonight is if Boston has its worst shooting night of the series and Miami hits 50 percent of their field goals. Jimmy Butler is constantly wincing in pain on the court and the Heat don’t have enough depth in their lineup to make up for it.

Seeing how much slower Butler has been moving on the court since he hurt his Knee a few games ago is very discouraging thus making it risky to play him in DFS. Even if Tyler Herro ends up suiting up, how effective can he be on offense? He’s been ice cold from downtown and the Heat shot under 16 percent from beyond the arc last game. The Celtics have to be in full-drive mode tonight because of their shaky shooting in this series. With Butler and P.J. Tucker not at 100 percent, the Celtics should push the Heat’s defense to the interior and if they attack the rim frequently and it forces Miami’s defense to collapse in the paint, Boston will be set up for high-percentage shots from downtown with open players at the arc. Here are tonight’s core plays for our DFS NBA lineups.

The Celtics don’t want to go back to Miami and they’ll need Jason Tatum to once again play heavy minutes, even if Boston has a comfortable lead. Tatum has scored at least 22 points in 4 of 5 games in this series. The big hope with Tatum is that he, along with the Celtics, don’t get off to a slow start and make careless turnovers. Tatum has hit the 50-point mark on DraftKings in both of his last 2 games and 3 times against the Heat. As the Celtics top option and seeing him take 20 shots last game, it makes him worth the enormous price tag. Tatum hasn’t been hitting three-pointers as frequently over his last few games, but he’s coming off of a double-double and he’s picked up his rebounding over his last couple of battles. Tatum will also need to help facilitate and set up plays on offense as Marcus Smart is looking like he’s hurting and he’s actually dropped five or more dimes in four of five games. Tatum will frequently be double-teamed once he gets the ball at the elbow, but it’ll be important for him to get to the free-throw line and in game four we saw him take 18 free throws. With the Celtics needing to attack the Heat early to keep the pace of play up, Tatum will get the most time with the ball.

Even though Jaylen Brown didn’t grab as many boards in his last game, Brown is still absolutely in play for our top spot in our DFS NBA lineups. He pulled down seven or more boards in four of five games against Miami. Tatum will absolutely be prioritized over him by DFS players, but, with Jimmy Butler not moving as quickly on the court, Brown will be able to drive on him if screened out properly and have a lot of success once again. Brown won’t be in as many CPT/MVP spots as Tatum. Brown’s outside shooting was impressive last game as he knocked down five treys. He’s scored fewer than 24 points in just one game in this series and Brown will also play deep into this game and should take 18-22 shots. Brown has actually over 52 percent of his field goals in 3 of his last 4 outings. He’s taken 19 or more in each of his last 3 contests. Brown has also contributed blocks and steals in two of his last three games.

For the last game, I’ll admit that I said to put Bam Adebayo in the CPT/MVP spot if Robert Williams didn’t play. Williams played and Adebayo still posted a double-double last game and if the Heat don’t try to do everything they can to set him up in the post as often as possible, they are doomed. This time, we’re rolling with Adebayo without any contingencies. Adebayo is the Heat’s most impactful healthy player right now. Kyle Lowry has been virtually non-existent on offense and we all know about Butler and Herro’s injuries. There’s no reason Adebayo shouldn’t take 12 or more shots tonight. Robert Williams has played excellent defense against Adebayo, but even Williams isn’t moving up and down the court pain-free. Williams's knee is banged up and Adebayo should utilize his speed to quickly gain positioning. He’ll draw a lot of contact that way rather than starting with the ball at the top of the key and then waiting to attack the paint. He’s taken 15 or more shots in 2 of his last 3 battles and posted double-doubles and blocks in both contests. We should easily see Adebayo play 35-40 minutes tonight.

With Robert Williams not moving at 100 percent, Al Horford will need to play more minutes and continue his aggressive play in the post. He gets credit as well for keeping an eye on Adebayo throughout the series. We’ve seen Horford grab 10 or more boards in 3 of 5 games in this series and he’s even scored 16 or more points in 2 of his last 3 contests. It’s hard to determine whether or not he’ll take double-digit shots tonight, but, if he gets to the free-throw line more frequently like he did last game, that’ll make up for the lack of shot attempts. Horford has also been a blocks machine blocking multiple shots in each of his last three games. Horford posted a block in every game he’s played in the Eastern Conference Finals and even in the second round. He’s swatted away 10 shots in 4 games versus the Heat.

With Marcus Smart hurting, in theory, if you believe the Celtics are going to win and cover the eight and a half point spread across sportsbooks, Derrick White should get plenty of blowout run. As amazing of a perimeter defender Smart is, if he can’t shake off screens from the opposition and move as swiftly up and down the court, he’ll serve as more of a detriment against the slow-paced Heat and the Celtics don’t want to play at the Heat’s pace and to keep them moving quickly, White will be huge in that department. He’s actually scored 13 or more points in both of his last 2 contests. White contributed five-plus dimes during that span and grabbed a total of five steals. White has also blocked shots in every game he’s played against Miami. He’s not the most prioritized offensive player, but he’s been producing enough in other categories to make up for it. He should play close to 30 minutes tonight and if the Celtics are up huge like they were in game four, he’ll play closer to 40 minutes.

The Heat need all of the shooting help they can get and who knows whether or not Tyler Herro will play with an injured groin. Duncan Robinson has taken at least 11 shots in both of his last 2 contests. He scored in double figures in both outings and he pulled down four rebounds in both as well. He’s actually grabbed four or more rebounds in three of four games he’s played against Miami. He’s also stolen the ball in three of four games in this series including his last two. Robinson wasn’t as efficient shooting the basketball from downtown in game five as he was in game four but with Max Strus and Kyle Lowry not hitting shots, Robinson could once again find himself hitting the 10-shot mark. It’s encouraging seeing him put up defensive stats as well and that should give him a longer leash on the court even if his shots aren’t falling. Robinson played 28 minutes last game and 23 in game 4.

With Lowry looking slow, Gabe Vincent who also isn’t 100 percent has certainly seen more success scoring the basketball than Lowry, and last game, we saw him hit 50 percent of his shots for the 3rd time this series. Vincent has scored 14 or more points in 3 of 5 games in this series and he’s even swiped a ball in each of his last 3 battles. Seeing Vincent take 10 or more shots consistently is very encouraging. He’s played 23 or more minutes in all but one game in this series. He’ll help facilitate on offense and if the Heat shoot better this time, it’ll result in Vincent posting more assists. The shooting and steals production alone should keep him on the court. We’ll have to see if Lowry even gets 30 minutes tonight in an elimination game but Vincent will certainly get plenty of run with Miami’s 2nd unit.

We’re chasing a bit with Caleb Martin, but he’s very cheap and he’s played 40 minutes combined in his last 2 contests. Martin has been helpful rebounding the basketball pulling down six in both of his last two games. Martin is utilized mainly as a bailout option from beyond the arc, but he’s been good at following his teammates' shots up to keep plays alive. Despite scoring in double-digits in just one game in this series, he’s taken seven or more shots in three of his last four games. Martin is good at fighting through steals and averaged nearly a steal per game during the regular season. If the Heat are getting beaten up by Boston badly, we’ll naturally see more of Martin, but even if the game remains close, he should play at least 15 minutes tonight as he’s done in 3 of his last 4 battles.

Here at Fantasy Alarm we have the best NBA Playoffs coverage for all of your fantasy contents and wagers. We also have the top online fantasy and sportsbook promo codes in your state. Check them out today.