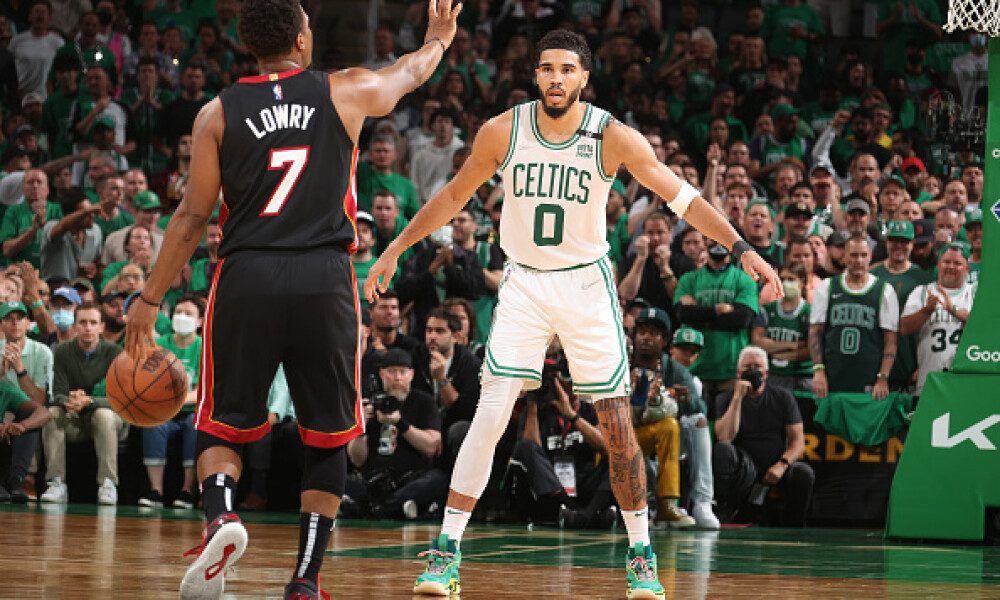 Have the Miami Heat’s injuries finally become too tough to overcome in the 2022 NBA Playoffs? Jimmy Butler has a bad knee and scored six points in game four against the Boston Celtics in the NBA Eastern Conference Finals. The Celtics haven’t been hitting their three-pointers since shooting 50 percent from downtown in Game 2. Boston is dealing with their own injuries and we’re waiting to see if Marcus Smart and Robert Williams will be active tonight as both are currently game-time decisions. If Williams doesn’t play, Bam Adebayo will have an easier matchup and he should be able to produce more points as he did in game three. Tyler Herro sat last game for Miami, but even if he plays, he’s been ice-cold shooting from long-range throughout this series. Another added plot twist that we’ll all need to be aware of is surrounding the Heat canceling their morning shoot-around. There’s speculation that certain players, coaches and/or trainers are still in Boston because of a COVID outbreak. The top Heat reporters are refuting that any players were involved, but if setting an early DFS NBA lineup, make sure you’re watching the news. Here are tonight’s core plays for our DFS NBA lineups.

After having a miserable shooting performance in game three of this series, Jayson Tatum rebounded the following game scoring 31 points and shooting 50 percent from the floor. Tatum has shot over 47 percent from the floor in 3 of 4 battles. He pulled down eight rebounds for the second time in this series and if Marcus Smart is out again, his assist ceiling will rise as well. We can’t assume that tonight’s game will be a blowout because of Boston’s poor shooting and after what we saw in the third game of this series in which the Heat were able to hang on and win even without Jimmy Butler in the second half. Tatum should play 35-40 minutes tonight at least and he should take 17-20 shots tonight. He’s also produced blocks and steals in two of four games in this round. Tatum did a great job attacking the rim as he shot 16 free throws and if his three-pointers aren’t falling, he’ll need to utilize his strong driving ability against banged-up Heat wing players.

The combination of Jaylen Brown’s poor shooting and the Celtics leading comfortably, Brown didn’t give a good DFS return last game. He shot 25 percent from the floor after shooting 52 percent or better in the previous 2 contests. Brown has done an excellent job rebounding this series grabbing no fewer than seven in any game in this series. Brown also is dealing with Jimmy Butler guarding him who is clearly hampered from his knee injury and that should result in higher-percentage shots for Brown tonight. It was encouraging seeing Brown take 20 shots in 29 minutes. He scored 40 points in game 3 and we’ve seen him hit the 20-shot mark in his last 2 outings and he should take 18-22 shots tonight. Brown has also hit three or more three-pointers in three of four games against Miami. He’s had a strong series against the Heat’s tough defense and we can chalk up last game to him just having an off night shooting the basketball.

Yes, there’s a contingency surrounding putting Bam Adebayo in the top spot. The Celtics only needed Robert Williams to play 19 minutes in the game 4 blowout but when he’s played, he’s stifled Adebayo and the only game in which Adebayo flourished from an offensive standpoint was the 3rd game of this series when Williams sat. Adebayo scored 31 points and grabbed 10 rebounds in that game and the most points he scored in the other 3 games was 10. His inconsistent production makes him hard to trust. Even his rebounding has been all over the place. If Williams sits though, the Heat will need to use Jimmy Butler as more of a decoy unless he’s hitting his shots, but with Butler unable to move at full speed, Adebayo can see a lot of quick passes cutting the lane. You would think that after hitting 15 of 22 shots in game 3, the Heat would find ways to feed him more in the post, but then he only took 5 shots the following game. That doesn’t make sense and the reason has to be because of Williams effective defense. He can bring up the ball, run the floor, and get to the basket, but instead, he passes off all the time and he’s out of the play. Look at Adebayo ONLY if Williams sits.

If you’re in the mindset that the Celtics are going to destroy the Heat tonight, don’t start Robert Williams because just like last game, they’ll look to limit his minutes to preserve his Knee. Reports are out that he’s feeling better and it’s encouraging that he wasn’t utilized as much last game so he should be fresh and a bit more healed up for game five. Williams has scored 10 or more points in 2 of the 3 games he’s played Miami. Williams has done an excellent job handling Bam Adebayo in the post and he’s been a key defensive stopper during the Celtics playoff run. It’s not as much of a dice-roll playing Williams as it is playing Marcus Smart who has missed two games in this series. Williams has also blocked multiple shots in every game he’s played in since May started and thinking he’ll play 27-30 minutes tonight, start him once we get that final confirmation that he’s active.

Al Horford is a safer route to go if unsure whether or not you trust Williams' health heading into this game. Horford has played no fewer than 33 minutes in any game in this series and while he’s been getting an inconsistent amount of shots, he’s been producing defensively pulling down 13 or more rebounds in both of his last 2 contests and blocking 7 shots total during that span. If the Celtics do in fact jet out to an early double-digit lead and don’t surrender it, Horford will still play mid-30s minutes and the Celtics will favor him over Williams. View any scoring he does as an added bonus. If Williams sits, Horford becomes a must-play as the Celtics prioritized post-defender and that will give him more shots. He took 14 when Williams sat in game 3. Know going in that you’re paying for boards and blocks for the most part if Williams is active. Horford has also dropped three dimes in all three games he played in this round.

After seeing Victor Oladipo play 30 minutes last game in the blowout and from the way he shot, the Heat should look to feature him more tonight. There’s no reason why Oladipo shouldn’t get 10-plus shots tonight even if Tyler Herro plays. Tyler Herro hasn’t been able to hit three-pointers and Oladipo shot over 57 percent from beyond the arc last game. Oladipo has scored 14 or more points in 2 of his previous 3 games. With Butler having trouble moving with the ball, and as surprising as it is that Oladipo is one of the healthier players on this team, that’s just the reality of the situation and especially with Boston not shooting well from long-range in their last couple of games, Miami should counter that by giving Oladipo more room to create. Kyle Lowry certainly isn’t getting it done offensively and Max Strus couldn’t buy a basket last game. Oladipo has also posted seven steals in this series. He can drive and speed up the offense and with the Heat’s lack of consistent shooters, he should get meaningful minutes in a competitive game.

Payton Pritchard has done a good job knocking down the shots he’s given but the big question remains, why isn’t he more involved? Boston hasn’t been able to hit three’s as a team and yet, Pritchard hit three of six shots from downtown last game. He’s a good change-of-pace player off the bench as well and if the Celtics are leading early, they may want to go a bit easier on Marcus Smart who has missed multiple games in this series. Pritchard has scored 10-plus points in 3 of 4 battles in this series. He’s even posted swipes in three of his last four contests. If Smart sits again, Pritchard’s production ceiling will rise because he’ll have more time with the ball in his hands and he’ll produce more assists. He’s contributed three or more dimes in three games this series. If the Celtics end up crushing Miami, we’ll see Pritchard play 25-30 minutes.

Remember Duncan Robinson? The guy the Heat paid $90 million for! Robinson saw the most playoff action he’s seen since the first round against the Hawks. Robinson has been mainly a one-trick pony serving as the Heat’s bailout shooter from long-range. Robinson knocked down four three-pointers last game and with Miami needing all of the help they can get draining three-pointers, perhaps they give Robinson 20-plus minutes again and let him fire away to try to keep the Heat in this game. Robinson has been a more reliable three-point shooter than Tyler Herro this series and that’s not an exaggeration. The Heat have been very fortunate that the Celtics haven’t been shooting the ball well, but if that happens tonight, it’ll be hard for Miami to keep up and Robinson can help keep the game with his shooting. He took 11 shots last game and scored 14 points. For what it’s worth, Robinson also grabbed four or more boards and at least one steal in two of three games he’s appeared in versus Boston.

Grant Williams is coming off of a very poor shooting game, but he has playing time on his side as he’s played 32 minutes or more in every game in this series. He’s hit double figures in scoring in two of his last three games. The impact Williams provides can’t always be translated on a stat sheet. He’s a good on-the-ball defender and has the agility to fight through screens on defense. He’s grabbed five boards in both of his last two outings and he’s stolen the ball in three of four games in this series. The Celtics may look to feed him more at the arc once again as he took the most amount of three-pointers last game than he did in the Celtics previous three games. Williams has hit multiple three-pointers in two of his last three battles. It’s a risk starting him in DFS because of how up and down his scoring has been, but he has a very safe floor when it comes to minutes.

Here at Fantasy Alarm we have the best NBA Playoffs coverage for all of your fantasy contents and wagers. We also have the top online fantasy and sportsbook promo codes in your state. Check them out today.