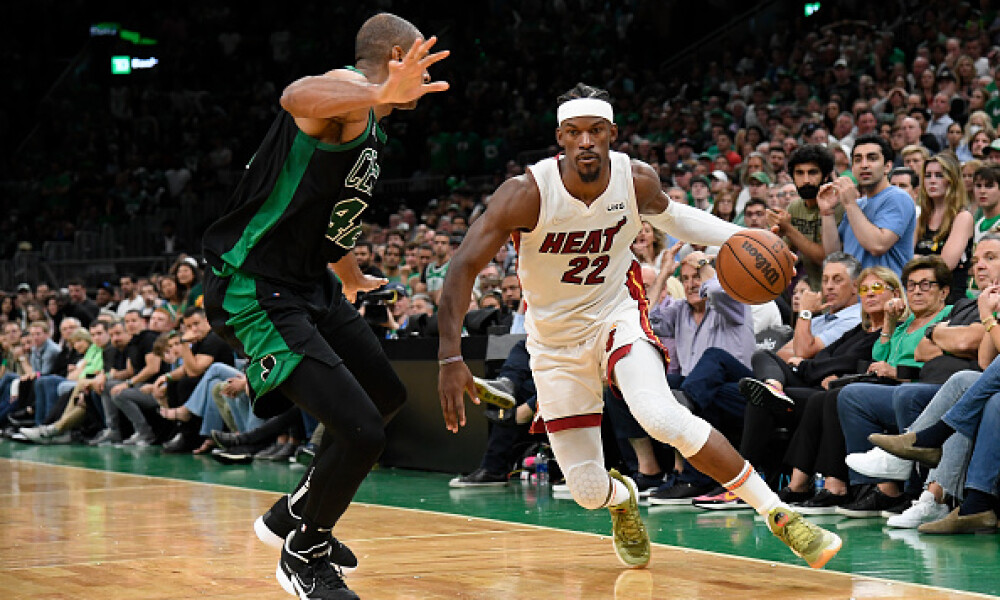 It’s the two best words in all of sports: Game 7. With how physical this series has been and with a trip to the NBA Finals on the line, this game on Sunday has the making of an instant classic. After it was presumed the Celtics would wrap up the series in six games at home on Friday, Jimmy Butler went to Superman mode and had a 47/9/8/4 line on the road. As we build our NBA DFS Lineups, the hardest thing to find will be value as these rotations likely won’t go past seven players per team and minutes for the crunch-time lineups will be through the roof. Here are the NBA DFS top plays we can invest in for our lineups on FanDuel, DraftKings, and Yahoo!

Jimmy Butler: While we are not likely to get another 81.75 fantasy points on Sunday, we also shouldn’t expect the 22.5 fantasy points he averaged in games 3-5 either. A home game with a shot in the finals on the line is what Butler was made for. The best thing about Game 6 was Butler’s usage got back over 30% for the first time in four games. That is certainly something we can count on from the Heat superstar. In games 3-4 he never shot above 38%, and the last time he shot that poorly before that stretch was all the way back in Game 1 in the Philadelphia series.

Jayson Tatum: Tatum has been incredibly elite and consistent the last three games, scoring 51, 50, and 50 fantasy points. But Tatum taking just one shot in the fourth quarter of Game 6 was dumbfounding. His 21% usage in that game was the lowest since February 8th, so we should expect the ball to be in his hands a lot more in a do-or-die situation on Sunday. Tatum’s minutes crept up to 45 in Game 6 and we can expect more of the same if this Game 7 stays close.

Jaylen Brown: Brown’s minutes are also exactly what you need out an MVP spot, topping out at 41 minutes in Game 6. But he also looked allergic to shooting the basketball with only 13 shots in the game. Marcus Smart and Derrick White are fine offensive players, but I guarantee that Boston does not want those two leading the team in shots again on Sunday. If Brown can figure out how break down the Miami defense when they keeping switching on him in pick and rolls, he could have a strong day forcing his way to the basket.

Marcus Smart: There are times in this series when Smart looks like the best player on the floor, and then there are times when it looks clear that he is still hurting from the previous ankle injury. It would take some kind of shocking development for him to not suit up in Game 7, and I’m sure he is already hearing from the coaches as they push him towards assists, rebounds, steals, and pressure. Smart can pay off an $8,000 salary with those stats and a handful of points. Especially since he is also now playing 40+ minutes in this series.

Max Strus: Except for one standout game in this series, Bam Adebayo has really struggled to get any offense going against Al Horford and Robert Williams. But Strus has been picking up the offensive slack in three games this series, and I think the Heat will need his three-point shooting on Sunday. As the Celtics will do everything they can to prevent penetration and easy looks at the basket, it is Strus who will likely see the open threes when his man sags down to help in the lane. If he can knock down 38% like in Game 6 plus add some ancillary stats, this could be a nice addition to your roster.

Kyle Lowry: After actually posting negative fantasy points in Game 5, Lowry bounced back with his best game since March 23rd with 44 fantasy points in 37 minutes. He was hitting three-pointers (44%), handing out assists (10), and would have had a bigger game if he didn’t foul out with time left in the game. He got a salary bump to $7,000 on DraftKings, but can still 5x that salary if he plays close to 40 minutes again. If Smart is at all limited on Sunday, Lowry gets a nice bump in projected fantasy value.

Derrick White: Even with an $800 salary bump on DK (now $6,200), we have to pay attention to White since he has played 34 minutes per game in the last three of this series and averaged 36 fantasy points. With Robert Williams oft-injured and Grant Williams largely being ineffective, the Celtics are just choosing to go small with White at the two-guard and Brown and Tatum playing the forward spots. Even at $6,200, there is a lot of meat left on the bone here where White can take advantage.

Victor Oladipo: We have to understand what we are most likely to get when we roster Oladipo in Showdown, while also recognizing there could be potential for a blow-up game if the game script hits right. Just twice since the beginning of the second round has Oladipo scored more than 30 fantasy points. But he also is a consistent 15+ fantasy points and he has played more than 20 minutes in four of the last five games. If Oladipo had shot just his seasonal averages on Friday, we would have had more than 20 fantasy points. At $5,200, he might be the best value option on the slate.

Grant Williams: Playing Williams is not for the faint of heart right now. He may be the player with the lowest salary actually getting rotation minutes, but the production has not been there. His fantasy points have decreased in five straight games and he only played 17 minutes in Game 6. Still, there is a 28-40 fantasy point player here as he has shown in other rounds of these playoffs. But at $4,800, we need to hope for extra minutes due to injury or some other circumstance. His usage doesn’t seem to be high enough to get there just on points and rebounds.