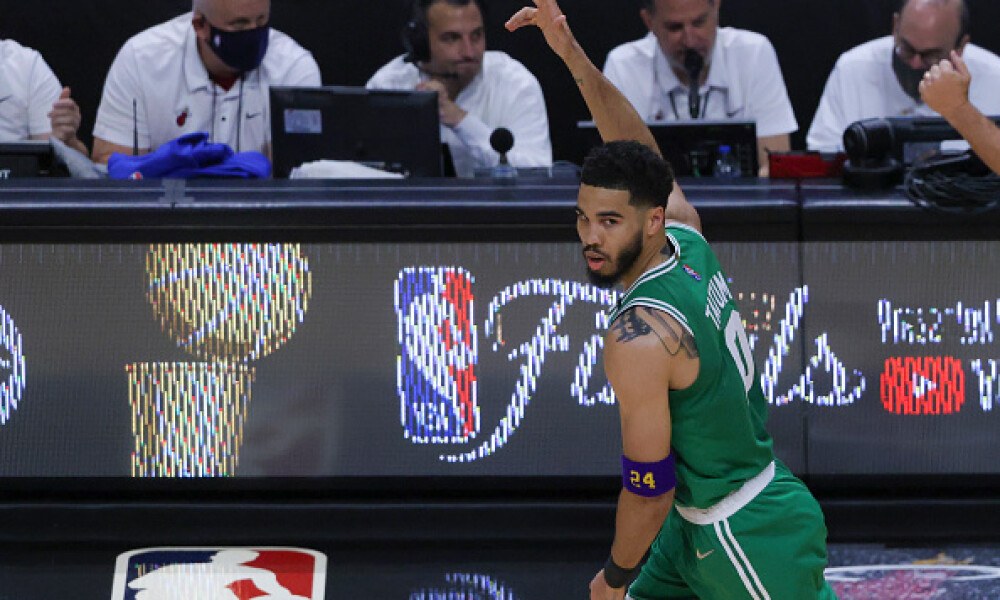 The 2022 NBA Finals start tonight and it's time to build those NBA DFS showdown lineups on DraftKings, FanDuel, and Yahoo Fantasy before the 9 pm ET tipoff. While the Boston Celtics and Golden State Warriors had different paths to get to this point of the basketball post-season, both are capable of winning this series. Boston has been the more efficient team on defense in the playoffs and had the harder road to get to the finals. Both teams recorded a victory against each other in the regular season, but Klay Thompson and Al Horford were out in their first matchup. Then in their second battle, Draymond Green came off the bench as he was just returning from injury and Stephen Curry hurt his foot during the game and only played 14 minutes.

Don’t get deceived by these previous matchups when figuring out who to start in your DFS lineups. We don’t know how much of the injured Warriors' depth will be returning tonight as they have multiple players listed as questionable on the injury report. Robert Williams should play for Boston tonight but we don’t know how long his leash will be as his knee has been problematic over his last few games. The Warriors play at a quicker pace, but Boston has more impactful offensive weapons and both teams will need to utilize their drive-game and not rely as much on their play from the arc if the three-pointers aren’t falling. Here are tonight’s core plays for our DFS NBA lineups.

The NBA Eastern Conference Finals MVP Jayson Tatum is absolutely in play for the top DFS spot tonight as the Celtics are going to need him out there for 40-plus minutes. Tatum has scored 26 or more points in 3 of his last 4 outings and we should see him take 20-23 shots tonight. He’s heated up from downtown, but he can’t stick to the arc. Part of the Celtics game plan should be to attack the Warriors big men drawing contact and possibly getting them into foul trouble and Tatum will need to be the catalyst.

Tatum has produced two double-doubles in his last three games and Tatum actually averaged 26.5 points per game against the Warriors this season and for what it’s worth, he was consistent in both performances and Draymond Green was active for both (even though it was his second game back from injury in their second game). Tatum has also blocked shots and dropped five or more dimes in three of his last four battles and seeing him spread out his production in multiple categories consistently is very encouraging. He’ll be chalk, but remember, it’s game one and we need Tatum to get limited by the Warriors defense in multiple games before we don’t include him in our lineups.

If you think the Warriors will come out hot scoring from the field, Stephen Curry is going to have to be the fire-starter and unlike some of the other Warriors options that are mainly scoring-dependant, we know Curry will get the most time with the ball and we should see him take 17-21 shots tonight. He’s dropped no fewer than eight dimes in each of his last three outings and he continues to rebound posting five-plus in five of his last six battles.

There is a risk in starting Curry because the matchup will be tough for him and the Dallas Mavericks (one of the top defenses against opposing backcourts) were able to limit his scoring and Marcus Smart is the reigning NBA Defensive Player Of The Year and he’s been a hound on Curry when he’s faced the Warriors. Curry can counter Smart’s strong defense by always being on the move off the ball and even cutting to the basket. The Celtics are preparing to stop Curry upon receiving the ball when he crosses midcourt and cutting to the basket and utilizing his play inside the arc will fatigue the Celtics defense and keep them on their toes. The Warriors can’t let Boston get set defensively. They must keep them guessing at all times and if Curry plays more inside the Warriors will have more success.

The Warriors main defenders will have to keep an eye on Jayson Tatum and Jaylen Brown cutting to the basket, but if the Warriors defense collapses in the paint often, Marcus Smart will be left open for higher-percentage shots from the arc. Smart took 22 shots in the Celtics victory over Miami in game 7 and he scored 14 points or more in all but 1 game he played in against the staunch Miami defense. The Warriors aren’t as strong as defending guards and Stephen Curry is a good matchup for Smart.

Smart has also pulled down five or more rebounds in six of his last eight battles. The Celtics have statistics working against them as it’s historically been hard for teams to rally after game seven of a series to win the first game of the next series, but if Smart is hitting his three-pointers, the Celtics will be a lot more competitive. He also swiped 1.6 balls per game for the season and contributed nearly 6 assists per game. He’ll be less owned and with a lot of the offensive focus for the Celtics being on their wing and post players, Smart can provide major relief from beyond the arc and he should play close to 40 minutes tonight.

The Warriors will need Andrew Wiggins to once again play heavy minutes and after seeing him take at least 14 shots in 4 of his last 5 outings, let’s roll him out since he’s not as reliant on scoring as Klay Thompson is. Wiggins has posted two double-doubles in his last three games. He’s shot over 43 percent from the field in five of his last six battles. He’s recorded three double-digit rebounding games in his last six contests and grabbed no fewer than five boards in any game during that span. Wiggins has also stolen the ball in four of his last six games. The Warriors don’t provide a lot of frontcourt offense and Wiggins will be needed to work his way inside. He’s been a lot more successful from the elbow than the arc.

With Robert Williams still limited and with us not knowing how long he’ll be in the game tonight, we should expect Al Horford to get a lot of playing time. He should play 30-35 minutes and he’ll be needed to shift between PF and C throughout tonight’s game. He’s been a bit inconsistent on offense throughout the playoffs as he has certainly had games in which he didn’t take a lot of shots, He’s grabbed 10 or more boards in 5 of his last 8 battles and he’s actually produced 4 multi-block games in his last 5. He’s also compiled steals in two of his last three games. Horford will be needed more for his defense than his offense, but the blocks and boards production he’s provided along with Robert Williams being unable to play deep into the games as his lower body isn’t at full strength makes Horford more appealing.

Tonight will be a challenge for Draymond Green because the Celtics do a good job of producing in the paint, but, with Robert Williams moving a bit more slowly, let’s see if Green can continue producing in double figures. His biggest issue will be staying out of foul trouble because of how physical the Celtics are. Green will bring up the ball a decent amount of this contest and he’s posted no fewer than five boards or five dimes in each of his last four games. He’s cheaper than Kevon Looney on DraftKings and he should play 35-40 minutes tonight as long as he doesn’t limit himself by playing too aggressively.

The Warriors are well-rested and they are going to be ready to pour on the offense and as good as Marcus Smart is, he’ll need help keeping the Warriors moving around the arc and not setting and shooting constantly. White played very aggressive defense on the Heat’s guards and he’ll be needed once again even with Smart healthy. Derrick White only played 19 minutes, but the Warriors are a much faster-moving team than the Heat, and White’s speed will be needed. He’s swiped multiple balls in three of his last four games and he’s blocked shots in six straight outings. He gets in his assignment’s face and will commit stupid reach-in fouls at times, but the Warriors need to be pressured at the arc, and White moves swiftly through screens and it’s very hard getting him out of position. What makes White a dart throw is his playing time because you would think that with the season on the line he’d play a lot of minutes in game seven, but he didn’t and if he’s not out there it could impact his shot total.

There’s risk in rostering Otto Porter Jr. tonight because he may not even play. He’s been dealing with an injured foot, but because Andre Iguodala is also banged up, Porter could be useful if he can suit up and he’ll be needed to guard Grant Williams in the second unit. Porter provides a good balance of offense and defense. He’ll hit a good amount of mid-range jumpers and it’s been very encouraging seeing him cut back door as he has in the playoffs. He’s not the most prioritized player offensively, but he can provide points, boards, and steals. He’s hit double figures in scoring in four of his last six playoff games. The Warriors have enough players (including Porter) that can hit shots from beyond the arc, but inside offensive presence will be huge for the Warriors so they can show that their offense is more dynamic and that they can produce in the post. He’s also pulled down six-plus boards in two of his last three outings.