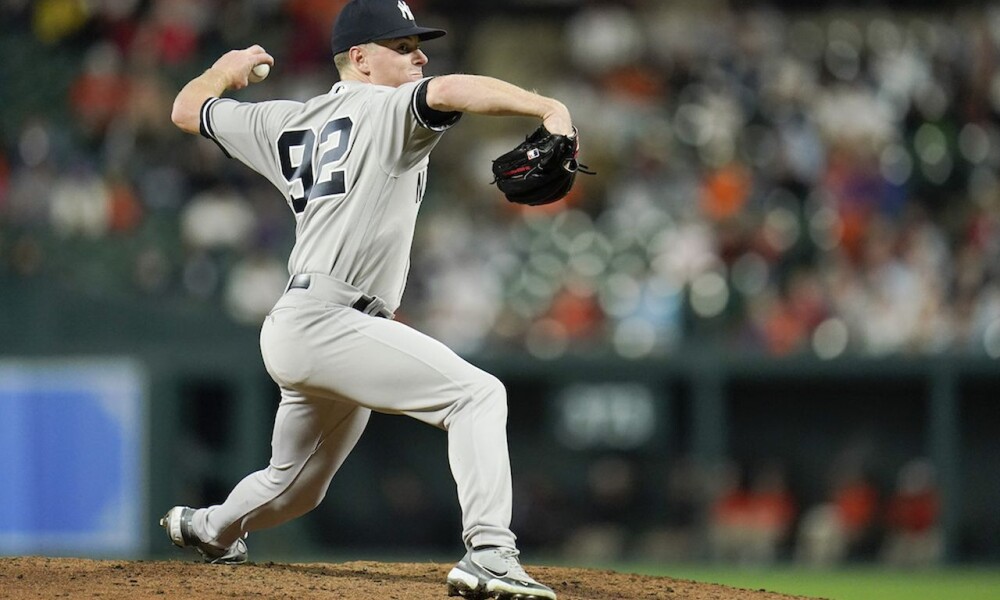 Wednesdays are generally a busy day across baseball, and today is going to be no different. For our purposes, we have a five-game MLB DFS main slate (on DraftKings and Yahoo Fantasy) that begins at 7:05 or a seven-game MLB DFS main slate (FanDuel) that begins at 6:40 to expand our player field. Now it’s time to comb through tonight’s MLB lineups, stay up to date with the MLB weather and MLB news, and find some value-priced MLB DFS fantasy points to make it a profitable evening.

It’s a rough night for value-priced pitching options, so why not just go as cheap as possible with Sears? Starting for the Yankees means that Sears should be set in the run support department, and going against Tyler Wells should put him in a solid position for a victory. With .228 team batting average and a wRC+ of 90, Baltimore gives Sears a good landing spot. Over the past two years, Sears has continuously struck out more than a batter an inning while having success at Double-A (4.09 ERA/3.55 FIP in 50.2 innings) and Triple-A (2.87 ERA/2.76 FIP in 53.1 innings last year and then a 0.83 ERA/1.12 FIP) in 21.2 innings this year) while also limiting the walks. Let’s see what he can do in his first career start.

We can only use Castillo over at FanDuel but his price certainly got my attention. Castillo has yet to allow more than three runs in a start and he is coming off a solid outing (31 FD points) against Toronto in his last outing. The right-hander limited Toronto to two runs while he scattered seven hits over six innings without walking a batter and striking out five. In picking up a quality start, it was the deepest Castillo pitched in a game this season and that might be the biggest factor as to why his ERA is still 4.60 but he does have a 3.67 xERA.

Suarez just sneaks in under that $8k mark on DK, and the risk here is in the lack of consistency we have seen from the southpaw so far this season. After two starts in which Suarez allowed a combined three runs in 13 innings while putting up 27.3 and 22.2 DK points, respectively, thanks in part to 13 strikeouts, he then was only able to get through three innings against the Dodgers allowing three runs. Overall, Suarez has a solid 4.12 ERA while striking out 7.55 batters per nine innings and maintaining a 50.4% groundball rate. Opposing hitters have a hard-hit rate of just 32.8% against Suarez so far this year along with an 8%-barrel rate which does make him a solid option tonight.

At some point, Semien has to get it together and come closer to his expectations, right? Entering play on Tuesday, the infielder had hits in five straight games, but it still only brought his batting average up to .182 on the season. Semien has only driven in nine runs on the season, scoring 13 times, and he does have three stolen bases, but his next home run will actually be his first of the year after hitting 45 last season. If we are looking for a sprinkle of good news, Semien’s strikeouts are still below 20% but he only has a barrel rate of 3.2% so things aren’t exactly going smoothly. His O-Swing rate has jumped from 25.8% last season to 34% this year, and while that doesn’t paint an appealing picture, he still has a track record and is pretty cheap.

Targeting Rich Hill with the platoon advantage gets my attention here, but Vaughn has gotten off to a solid season overall for Chicago. In his first 25 games, entering action on Tuesday, Vaughn was hitting .277 with four home runs and 14 RBI as he looks to be finding his footing at the major league level. With a .181 ISO, we are seeing some power present. Vaughn is making hard contact at a rate of 53% this season to go along with a solid 9.1%-barrel rate, and he is a solid piece of a White Sox stack tonight.

Stacking Angels against Glenn Otto tonight could prove to be a viable option, and Marsh could prove to be a cost-effective piece of that. At some point, Marsh’s 31.9% strikeout rate and .390 BABIP could catch up with him, but it doesn’t appear that the time has come just yet. After picking up hits in his first two at bats on Tuesday, Marsh is hitting a solid .279 on the season with four home runs and 24 RBI while proving to be a vital piece of the Angels’ lineup.

Let’s stick with the Angels theme and another left-handed batter against Otto tonight. Walsh hit his ninth home run of the season on Tuesday, and that along with his 27 RBI and 20 runs scored, makes the .245 batting average a little easier to deal with. With a .224 ISO, we don’t have to worry about power or run production here and Walsh has some solid Statcast metrics with an 11.9%-barrel rate, 12-degree launch angle, and 45.5% hard-hit rate.