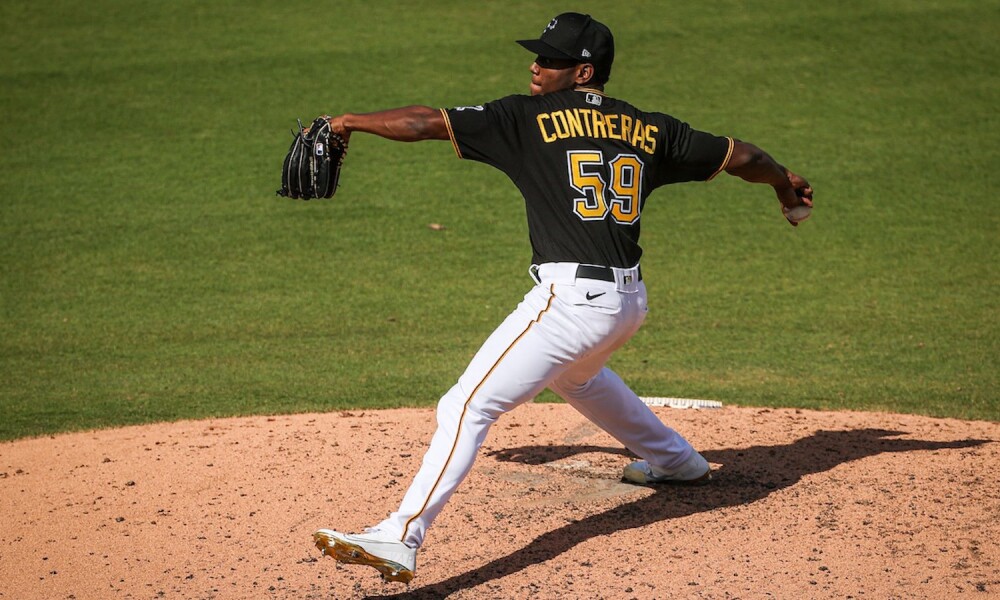 Today, we break up the week with a six or eight game MLB DFS main slate that begins at either 6:40 or 7:05 PM on the east coast. It’s time to take a trip through tonight’s MLB lineups in search of that elusive value option that will grant us the ability to fit in as many high-priced studs as possible. Staying up to date on the latest MLB news throughout the day is always important as is making use of the MLB weather tool. Now it’s time to take a look at some fairly priced MLB fantasy picks for tonight’s slate.

It doesn’t get any cheaper than Contreras on DK tonight as all indications point to the right-hander getting the call to take the mound against the Cubs tonight. In 7.2 innings with the Pirates this season, Contreras has struck out 10 batters to go along with a 3.52 ERA and 0.91 WHIP in three games out of the bullpen. Contreras has also made four starts in Triple-A, but the major concern is that he isn’t truly stretched out with just 14.2 innings in those outings. He has had success though striking out 20 batters, but conversely Contreras has also walked 10. It hasn’t impacted him (2.45 ERA and still a WHIP of just 1.20), but it is a cause for concern. At this price though, and with the strikeouts, it’s hard to ignore Contreras.

Giolito isn’t a true bargain based on the prices you generally see in this space, but he certainly should be considered a value as he makes his return from the COVID list. There are few situations better for Giolito to make his return in than against the Royals, and it’s not like the right-hander hasn’t had success this season either. In five starts, Giolito has a 2.70 ERA with 1.13 WHIP and 37 strikeouts in 26.2 innings and there is no reason not to expect him to continue on the same path tonight.

I don’t want to truly discount the Mets’ offense, but they aren’t an offense that will truly generate a fear in opposing pitchers either. Hicks’s last start was his best in the sense that he made it through five innings in his longest outing of the season. The right-hander did allow three runs on three hits and two walks while striking out three, but we can take something from the outing. Walks will continue to be something to keep an eye on, but Hicks does strike out a batter per inning and his 58.6% ground ball rate also helps to limit the overall damage.

White has gotten our attention batting atop Texas’ order, even if it is by default as they struggle for the most part offensively. Before going hitless in three at bats on Tuesday, White was hitting .250 in his last 10 games but what really stands out here is White’s six stolen bases and five walks. The sample size is small (54 plate appearances) so we can’t really read too much into the .239 batting average as it dropped 17 points in one game. White’s speed works in his favor here as does his on base skills, and batting in the lead-off spot also helps as well.

In Chavis, we get a right-hander with power who is facing a soft-tossing left-hander ripe for targeting in Drew Smyly. After picking up a double on Tuesday, Chavis is hitting .264 with three home runs and 13 RBI in 94 plate appearances and his platoon advantages are clear to this point; .353 with two home runs and seven RBI in 34 at bats compared with .196/1/6 in 51 at bats. Based on this, the FD pricing is a gift and fits nicely in a Pirates stack.

It doesn’t get much cheaper for Pollock tonight whose White Sox career hasn’t exactly gotten off to the best of starts. It is possible things are turning the corner for him though as Pollock has hits in four of his last six games which includes a two-hit effort last night. Pollock’s batting average is still only up to just .219 on the season, along with one home run and nine RBI, but there is a track record here and it’s a solid matchup against Zack Greinke as well. With a 12.5% barrel-rate and 15.5-degree launch angle, the quality of contact is there for Pollock.

Even though his 4.38 ERA might say otherwise, Jordan Lyles isn’t the best of pitchers. There is no questioning Gallo’s power ability, but he can only showcase it when he makes contact and striking out 36.8% of time doesn’t exactly make things easy. However, Gallo does have five home runs on the season and shares the platoon advantage to go along with a 20.8%-barrel rate and 50.9% hard hit rate. Opposing left-handers are hitting .378 with four home runs against Lyles and if you want to throw a dart at Gallo going deep tonight, it is a reasonable gamble.