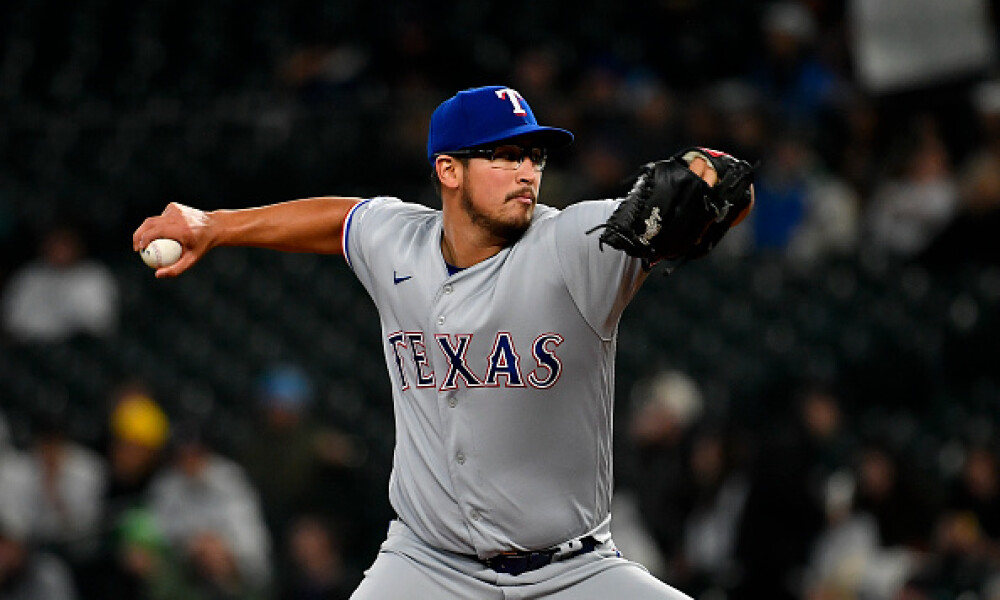 Last night proved that on any given day, we truly never know what we are going to see on a baseball field. While a five-person no-hitter might not be traditional, or even have any DFS value beyond Tylor McGill’s start, it is still pretty cool to see from the perspective of a fan.

Tonight, we have something that has been somewhat of a rarity this season as all three sites (DraftKings, FanDuel, and Yahoo Fantasy) are uniform with a seven-game slate beginning at 7 PM on the east coast. Let’s dig into some value options to help build a winnings squad.

This is a no excuses zone, but once you get into value territory, pitching is tough tonight. Dane Dunning gets home field advantage tonight against an Atlanta team that scored six runs last night but they are hitting .229 for the season against right-handed pitching. Dunning doesn’t pitch especially deep into games (18.1 innings in four starts) and that is why is ERA looks a little more inflated. The right-hander has allowed either two or three runs in each start this season, and his last start was his best as Dunning allowed two runs in 5.2 innings.

At the very least, we will get strikeouts from Dunning, 9.33 per innings, and his 3.56 xFIP does provide some optimism in a game that Vegas projects to be pretty even.

Taijuan Walker struck out four Phillies in two innings to begin the season and then he promptly exited with some shoulder discomfort. Tonight, he returns against that same Philadelphia team after throwing four successful innings in his most recent rehab start. We all know what happened to the Phillies yesterday, and Walker did have success last season (2.66 first half ERA) before tiring once his innings count rose.

If you want to stack Rangers tonight against Bryce Elder - not a bad idea - then Kole Calhoun is a nice and cheap piece to start that off with it. Platoon splits work to his advantage as Calhoun hit .272 last season with all five of his home runs against right-handers last season in 48 games and his career numbers follow the same trajectory. This season hasn’t been nearly as kind to Calhoun, but the only place for his .231 BABIP to go is up and his Statcast metrics are in line with what we have previously seen from him.

I’m not sure why Franchy Cordero isn’t available on FanDuel, but that doesn’t stop me from capitalizing on the free square from him on the other two sites. Cordero did go hitless last night, but there is value here as fits well into a Boston stack against Spencer Watkins tonight. That is a theme tonight and Watkins is another pitcher to target. After driving in 24 runs in 19 games at Triple-A so far this season, Cordero certainly deserves the promotion as he is also hitting .296 (albeit with a .391 BABIP) while scoring 13 times and hitting three home runs. At best, Cordero qualifies as a post-hype sleeper, but for now we are taking it a game at a time.

It is a Coors Field slate, so any cheap exposure we can get certainly grabs our attention. That is escalated when the opposing pitcher is non other than Conner Overton, so you can imagine our delight at Sam Hillard’s price. Despite entering season with a solid set of expectations after a strong finish to last season (at least from me), Hillard is hitting just .226 with three RBI to begin the season.

Despite not barreling a ball up yet this season, Hillard does have an average exit velocity of 91 miles per hour (a career high) and with a 14-degree launch angle and 42.9% hard hit rate, it’s as good a time as any for Hillard to go deep for the first time this season.

Take what I said above about Hillard and substitute Mike Moustakas and add in Chad Kuhl instead of Overton. Since returning from the Injured List, Moustakas does have three hits in eight at bats but his next home run will be his first of the season. The track record of good hitter is there for Moustakas, and if we ever are going to use him, tonight is the night as it gives us cheap exposure to Coors Field when the Reds are projected to score at least five runs per the implied game total.