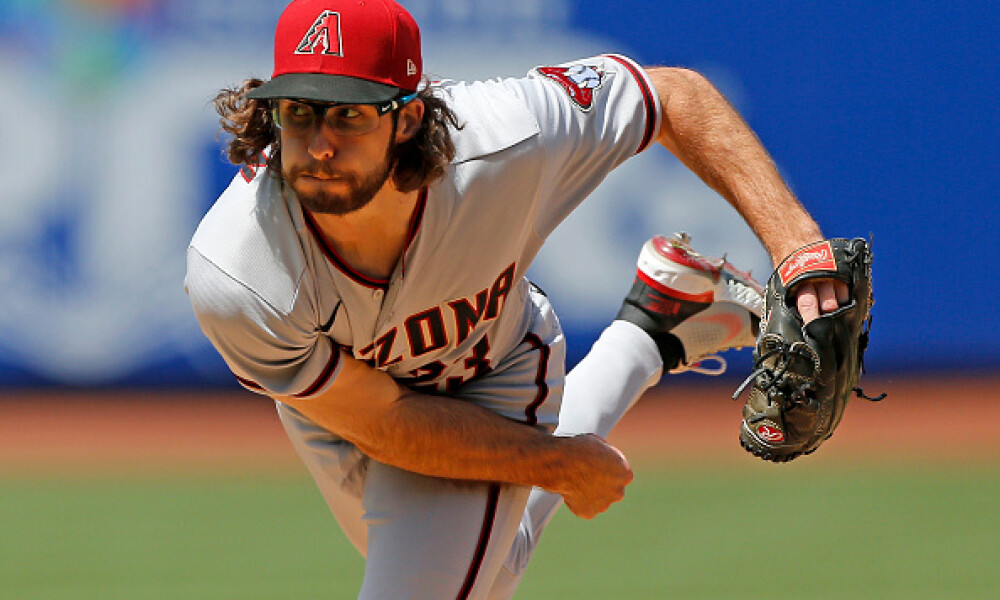 We start the third weekend of the MLB season tonight with an enormous slate on all three sites. Starting at 7:05 pm, there will be 13 games in action on DraftKings, FanDuel, and Yahoo. If you are to be successful, you will need to find some value and that’s what we are here for. I researched and came up with some of the best point-per-dollar plays on the slate. So without further ado, let’s open the MLB Value Vault for Friday night:

Zac Gallen’s first start of the season could not have gone any better. He was working on a limited pitch count due to a shortened spring training and tossed four scoreless innings on 66 pitches - putting himself in a position to be built up to a 90-pitch workload for tonight’s game. He breezed through the first four innings against the Mets giving up two hits and a walk while not allowing a Mets baserunner to advance into scoring position. Tonight, he faces that same Mets offense that is hitting .140 career against Gallen. Add in the fact that Chase Field has actually been a better pitcher’s park than Citi Field. With a slate full of questionable arms, take the $3K DK discount from his last start and roll Gallen into an SP2 role.

Chris Flexen has struggled in his first two starts of the season allowing three runs in each of his starts against the Twins and Astros. Tonight, he gets a breather at home as the struggling Royals offense comes to town. Kansas City is a bottom-third overall team batting against right-handers with a .329 slugging %; .595 OPS; 118 ISO and .271 wOBA. Flexen is not going to dazzle you with strikeouts (15.6%), but he doesn’t walk batters (5.7%) and can handle left-handed hitters (.292 wOBA). The Royals offense has major problems with right-handers on the mound and not one batter has an ISO over .200 besides Hunter Dozier and Salvador Perez since the start of the 2021 season. Flexen is also the favorite (-140) in a pitcher’s park (T-Mobile Park) and the Royals do swing and miss 21.3% against righties. He won’t win you a GPP, but Flexen may be safe enough to help you cash in Double Ups and 50/50s.

Marcell Ozuna will be high-rostered today but for good reason. He has four doubles, four home runs, and nine RBI while hitting .291. He gets the platoon advantage tonight as southpaw Trevor Rogers takes the mound for Miami. Rogers is a good young pitcher and is coming off a strong 2021 season, but he has struggled out of the gate. After a mediocre first start against the Giants, he imploded against Philadelphia allowing seven runs in 1.2 innings.

Rogers throws the fastball over 60% of the time to right-handed bats and that is right in Ozuna’s wheelhouse. Against fastballs, Ozuna has a .392wOBA; .458 CXwOBA; .286 ISO and 42% hard contact - all elite numbers. Rogers’ second pitch is the changeup and Ozuna and Matt Olson (ultra-elite metrics) both also crush that pitch. We could see a huge game incoming for Ozuna and the Braves, so don’t be on the outside looking in on this one.

What a surprise Josh Naylor has been. He has hit the ground running after returning from the IL on April 15th. This is a player that is coming off season-ending surgery for multiple fractures and torn ligaments in his right leg and ankle, but has worked his way back to being stronger than ever. He has two hits in every game played besides his first game and now the left-batter gets to visit Yankee Stadium and that short right-field porch. The wind will also be blowing out to right field tonight and he will get the split advantage over right-hander Jameson Taillon, who has allowed 1.8 HR/9 against RH bats last season. Not bad for dirt-minimum salary on all sites.

Trey Mancini sub-$3K? Where do these algorithms come up with some of these prices? He deserves more respect than that after coming off a .260 season with 21 home runs and 71 RBIs. He has not been terrible to start the year and before going 0-for-4 on Wednesday (he got tossed from the game last night) he was getting on the basepaths regularly in three straight games going 3-for-9 with three more walks and a run scored.

The numbers all add up tonight for Mancini against lefty Reid Detmers, who has a brutal 8.59 ERA and 1.64 WHIP after two bad starts this season. Mancini feasts on left-handers with a .236 ISO/385wOBA and is in the Top-10% of barreled balls. He will be in the middle of the order in Angels Stadium (a hitters' park) with the wind blowing out tonight. We may just see Mancini’s first home run of the year before the game is over.

Austin Slater is a poster boy for platoon hitters. You play Slater when a left-hander is pitching, especially one like Patrick Corbin. At a bare-minimum price, you get a leadoff hitter with elite splits - .230 ISO/.371 wOBA with a 42% hard-hit rate. On the other hand, Corbin has been dreadful against right-handed bats allowing a .388 wOBA/.255 ISO and he doesn’t miss many bats with a low 17.2% strikeout rate.

Corbin will throw his slider and sinker the most to the right side and Slater crushes both pitches, especially the slider where he has a .529 ISO/.654wOBA! You do have to worry about Slater being pulled for a pinch hitter if a left-handed reliever comes in, but that is built into his low salary and by that time, the damage may already have been done.