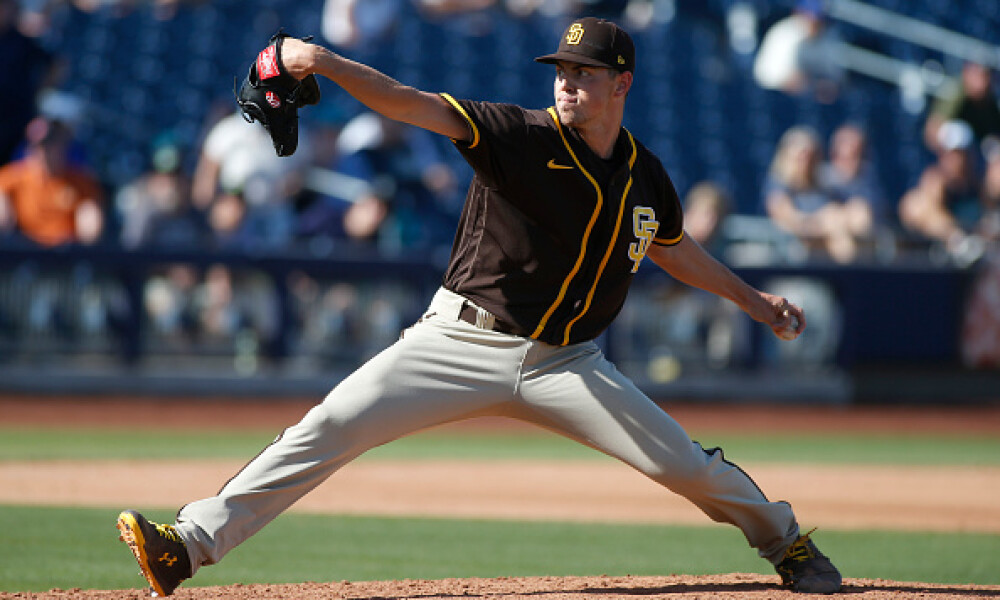 There is nothing better than Friday night baseball to kick off the MLB weekend. The cherry on top is putting together a winning DFS lineup, and you will have plenty of options with a huge 11-game slate on all three sites at DraftKings, FanDuel and Yahoo. Now the key to a successful MLB DFS evening is value, and you must find those top point-per-dollar plays that will vault you into the green as the last pitch is thrown. We are here to help you, so let’s open the DFS Value Vault for Friday night's MLB main slate.

The Padres' top pitching prospect has arrived. With Blake Snell being placed on the IL, the young lefty MacKenzie Gore will make his MLB debut tonight against the Braves. This is a kid with a mid-to-upper 90s fastball to go along with a mid-80s slider, curveball, and plus changeup that sinks right as it hits the batter’s box. Gore had a big spring and his command, which he struggled with the last two years, returned. He struck out 16 batters in 12 innings during Spring Training and pitched five scoreless innings in his first, and only, Triple-A start of this season. Gore is pitching against a strong Braves offense, but he is a free square on DraftKings at just $5K and is still too cheap on FanDuel.

Brad Keller is coming off a mediocre 2021 season. His advanced metrics weren’t horrible as he limited fly balls (27% with a 48.5% groundball rate), but his strikeouts were sub 20% with a 4.84 xFIP. In 2022, Keller looked great in his first start of the season throwing six shutout innings with five strikeouts against Cleveland. His slider and four-seam fastball were close to perfection with a 13% swinging-strike rate and 27.5 CSW. Now he gets the Tigers, who are striking out 24.8% of the time against right-handers with a .194 BA, .127 ISO, 80 wRC+ and .272 wOBA – all near the bottom of MLB team stats.

There is a long track record of left-handed sluggers having huge years while playing at Milwaukee's hitter-friendly American Family Field. Add Rowdy Tellez as another name on that list. The big first baseman is off to a solid start with a slash line of .316/.381/.579, and he's currently in the top 10 percent of the league in XSLG (.678) and MaxEV (111.3). Today, he faces a pitch-to-contact right-hander in Miles Mikolas, who is carrying a 4.88 xFIP, 40% hard-contact rate, and 16.1% K rate since 2021. Tellez should be batting fifth in the Brewers' order and is in a good spot to launch a home run with a .208 ISO, 39.7% fly-ball rate, and 41% hard-contact rate. Add together Tellez’s power and Mikolas' lack of strikeout ability, and you have a very good value.

When I started my daily game-by-game research this morning, one name jumped out at me – Seth Brown. He isn’t a household name, even among MLB fans, but it is hard to ignore his advanced metrics against right-hand pitching (he faces Ross Stripling today). Brown has a .295 ISO in 285 plate appearances vs. righties going back to last season and puts the ball in the air 49% of the time against right-handed throwers. He is only batting .238 this season but does have two bombs already with a .524 slugging %. Stripling, on the other hand, allows a .207 ISO and extremely high 45.1% fly-ball and 41.2% hard-contact rates to left-handed bats. If you want to be a bit contrarian today, take a shot on the A’s in a GPP stack anchored by Seth Brown.

Joey Gallo in the Value Vault? Well, yes, when he is only $2.7K on FanDuel. DFS fans have a love/hate relationship with the left-handed slugger. He can win you a GPP with his power, but can also sink a lineup with an 0-for-4 three-strikeout performance. He is currently in the “hate” part of the relationship, batting only .158 with no home runs, a strikeout rate of 33%, and a .158 slugging percentage. If there is ever a day for Gallo to break out of a slump and hit his first bomb of the year, it is today as he faces a gas can in Jordan Lyles. The well-traveled right-hander now calls Baltimore home, but I wouldn’t expect much to change from a pitcher that allowed 38 home runs last year (worst in the American League). Even with Gallo’s recent struggles, he still has a .266 ISO and .355 wOBA against right-handed pitchers – making this a great spot for a GPP play.

We are well aware of Cody Bellinger’s struggles. They were magnified in Spring Training when he struck out 18 times in 37 at-bats and he's now started the season with eight more in six games. Even still, there appears to be some light at the end of the tunnel as Bellinger has three two-hit games in those first six and has double-digit DraftKings points in each of his last four contests. Against the Twins on Tuesday, Bellinger had 16 fantasy points without even getting a hit and striking out three times – as he walked twice, scored a run, and stole two bases. With his walk rate up and an OPS around .900, Bellinger is certainly worth another shot tonight against a mediocre right-hander in Vladimir Gutierrez.