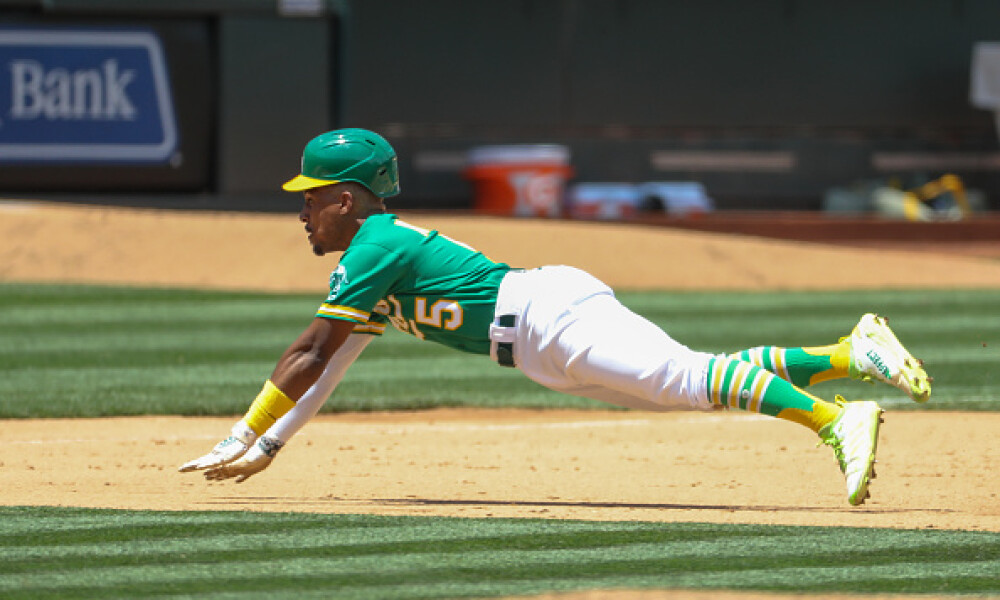 After the five-game slate this afternoon it’s time to zero in on hitters for the seven-game main slate for both sites. There are no weather concerns in play from a precipitation standpoint and three of the games are being played in domes which should mitigate any heat or wind issues as well.

Manny Machado, 3B SD - Machado has been the kryptonite for Bauer in previous meetings having gone 12-for-19 with four long balls off of the Dodgers’ righty for a .632 AVG and .818 wOBA. Now that the “sticky stuff” is under crack down and Bauer has been the poster child for this debate, his stuff may be more hittable this start out than previous starts. Machado has also been on a tear the last 10 games with a .351/.405/.703 slash line and three homers, 10 RBI, and two steals.

Matt Olson, 1B OAK - Olson is in the middle of a great year with 20 homers, 53 RBI, 48 runs, and a .303 AVG to this point and in the last 10 games he’s been lighting things up. Over the last 42 at-bats he’s hitting .452 with a 1.359 OPS, five homers, 12 RBI, and a steal for good measure. Foltynewicz hasn’t been good at all this year whether at home or the road but on the road, Olson is hitting 40 points higher than at home. It’s hard to avoid this matchup tonight.

Mike Zunino, C TB (DK Only) - If Zunino is in the lineup today he’s a good option at catcher, but only on DK because we don’t want to eat the C/1B spot on FD when there are better 1B options out there. Zunino has gone 7-for-11 off of Richards in past meetings with a homer and five RBI. Against RHPs this year he’s been all-or-nothing with a .125 AVG (12-for-96) but posting eight homers and 16 RBI. Richards has been susceptible to the long ball on the road as well.

Max Muncy, 1B LAD (FD Only) - Muncy is the leader for the NL All-Star vote at first base and that’s for good reason. He’s been the best at the position in the NL all year and now gets a pitcher he’s done well against previously to bolster his stat line some more. He’s 5-for-9 off of Musgrove which is solid, though a small sample size, and against RHPs in general this year Muncy has posted nine homers and a .387 wOBA. For his part, Musgrove has had trouble against LHHs, allowing seven of the nine homers he’s given up this year to left-handed hitters. The price on DK is steep but on FD he’s solidly in the mid-tier and quite a good value.

Hunter Renfroe, OF BOS - Renfroe has matched up with Rich Hill 21 times before and he’s recorded a hit seven times with two of those leaving the park. Against southpaws this year he’s posted a .421 wOBA which is best on the team with four homers which is also tied for best on the team. One more advantage in Renfroe’s favor, he’s been beating up on breaking pitches this year like the curveballs that Hill is known for throwing.

Ryan Mountcastle, OF BAL - Mountcastle has been smoking the ball most of the year and in the last 10 games, Mountcastle has posted a .359 AVG and 1.042 OPS with four homers and eight RBI. Against RHPs, he’s had a .301 wOBA which is third-best on the O’s with his eight homers being second-best. Jose Urquidy has been easier to deal with on the road and against RHHs he’s allowed a .322 wOBA on the year which all points to Mountcastle being a solid play.

Wander Franco, SS TB - How about that debut for Franco last night huh? Three times on base and a key run producer as well. The sites haven’t upped his price yet and Garrett Richards hasn’t exactly been a lock down starter for the Red Sox either. Every homer allowed for Richards this year has come on the road and with Franco being a switch-hitter he’ll get the advantage in the lefty-righty splits anyway. Let’s keep riding the wave of the Franco love and save money at the same time.

Tony Kemp, OF OAK - Kemp is a glue guy for the A’s but he’s also posted a solid run lately with a .313 AVG and .995 OPS in the last 10 games with a couple of homers and 11 runs. He’s also posted a .359 wOBA against RHPs which is fourth-best on the team and it just so happens that Foltynewicz has a .451 wOBA allowed against lefties at the plate. He’s a cheap option for a lineup that should do well tonight.