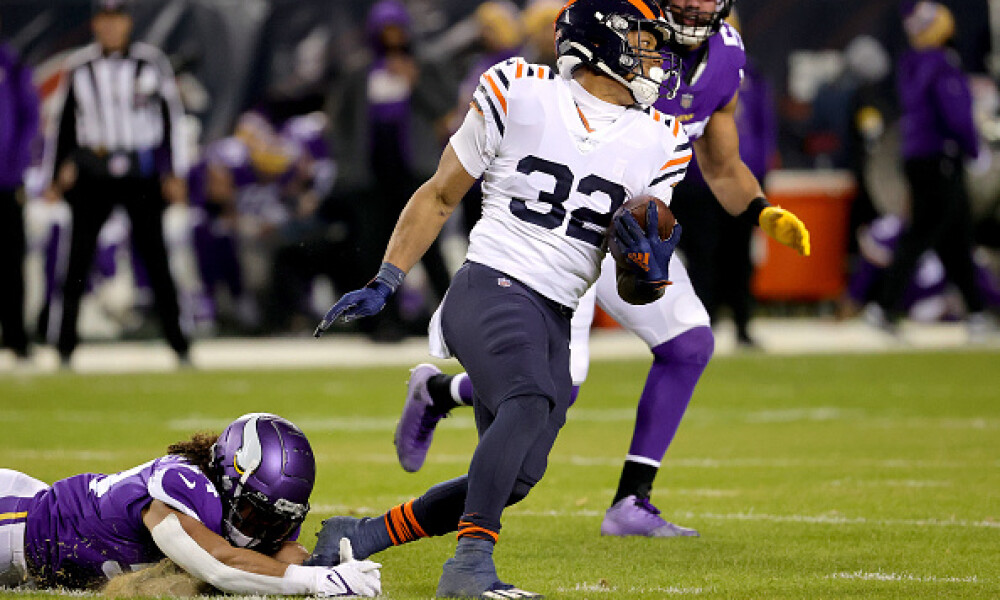 Running it back with the same two top-tier backs this week.

Jonathan Taylor, IND – Taylor is having the best season of any back and ballin’ on a weekly basis. On top of that, the Colts have to win this week to make playoffs, so Taylor should get his normal workload, which is very important for Week 18. It also doesn’t hurt that he gets a matchup with a terrible Jaguars team on the verge of locking up the number one overall pick with a loss. Taylor should run all over this team and I would be shocked if he doesn’t find the end zone a time or two. The only concern I have with Taylor is that he has just one reception total over the past four games, so finding the end zone is an absolute must, but he’s consistently done that.

David Montgomery, CHI – Monty and the Bears have nothing to play for this week and that makes him a bit riskier to use. That is because they could just give Herbert some more work this week since the game is irrelevant, but I still expect to see Monty get the lion share of the workload. He has been playing well with back-to-back 20+ point games and three such games in the last five (with the other two games being decent outings as well of 12+ points). This matchup with the Vikings is a good one as well. I would only use him in GPPs, but I do think there is good reason to take a shot on him.

Both mid-tier backs are the same price on DK. They are both a little pricier than I like from the mid-tier, but with Week 18 it is more important to targets players from teams that having something to play for.

Devin Singletary, BUF – Buffalo is playing for the division title in this game as they claim the AFC East title with a win over the Jets. Singletary is the clear back in this offense at this point and there is no question with that anymore. He has been playing well, scoring 14.9, 16.6, 18.8, and 26.0 points over the last four games and is coming off a game in which he saw a season high 23 carries and rushed for a season high 110 yards. He also has two games with at least five receptions in his last four games. On top of all that, the Jets are the best matchup in the entire league for running backs.

Elijah Mitchell, SF – The 49ers have to win this game to make playoffs, so once again, the exact type of player that we want to target for Week 18 DFS. In the last three games that Mitchell has played he has scored 30.8. 17.4, and 24.0 points. He has racked up at least 21 rush attempts in four straight games. He has found the end zone in three straight games and has 10 receptions over the past three games. He is the bell cow back of this offense when he is on the field and he has been great. This matchup with the Rams is a fine one and Mitchell should get plenty of work once again.

Le’Veon Bell, TB – Let’s have a little fun shall we?? The Bucs don’t have much to play for this week and both Jones and Vaughn are dealing with injuries while Fournette will still be out of action. Bell was involved in the passing game last week, catching three passes for 30 yards while also rushing three times for five yards. He is far from a sure thing, but would it be that shocking to see Brady get Bell involved this week and let him have a big game in this game against a terrible Panthers team? It wouldn’t surprise me and with the Bucs being one of the most explosive offenses in the league, Bell could find the end zone as well. GPP dart throw!

Aaron Jones, GB – This game is 100% pointless for the Packers. They have locked up the number one seed in the NFC and having absolutely nothing to play for. I wouldn’t be surprised if Jones sits this game out entirely, but even if he does play I have zero interest in him for DFS (despite the great matchup). I just don’t see anywhere near enough upside to pay off his top-five price tag.