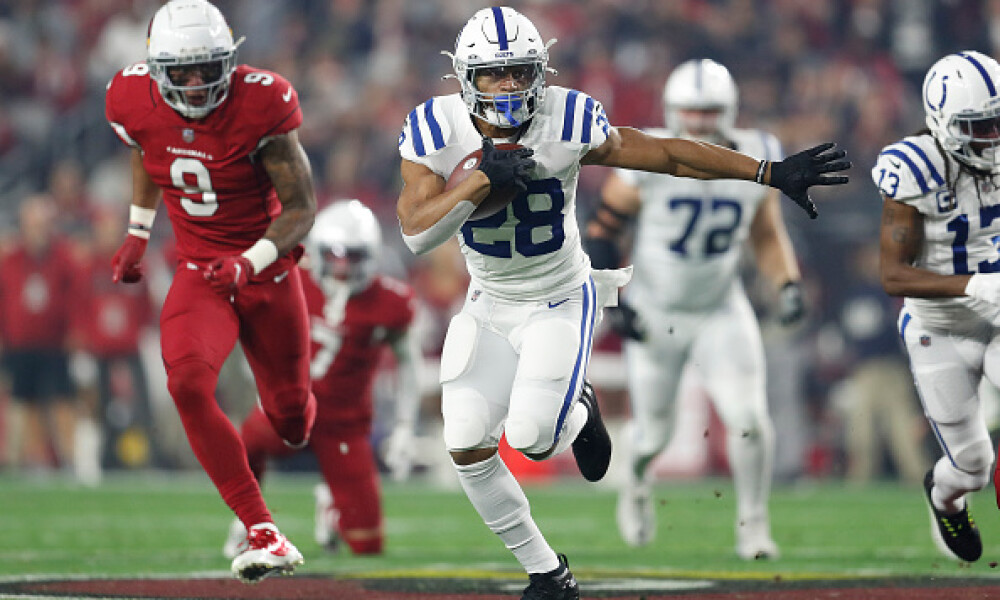 Jonathan Taylor, IND – We get Taylor back on the main slate and it kind of worked out well that he wasn’t on the main slate last week with the dud game that he had. He should without a doubt bounce back in this one though. He goes from facing one of the best defenses in the league in the Cardinals to facing one of the worst defenses in the league in the Raiders. He could be in line for another massive game in which he scores 35+, but at the very least I think he’s a lock for 20+ and it’s hard to fade someone like that, even when they’re expensive. Plug him into your lineup and figure out the rest after doing that.

David Montgomery, CHI – Monty is coming off a strong game in which he scored 23.6 fantasy points and had seven receptions on nine targets while also pounding a touchdown in on the ground. The receiving work is amazing right now as he has at least six targets and at least receptions in four straight games (averaging nearly eight targets per game and nearly seven receptions per game in that span). This week he gets a matchup with a lousy Giants team who rank as a good matchup for backs and it also should allow for the Bears to win this game or at the very least stay competitive. He should be in line for 20+ touches and I wouldn’t be surprised if he finds the end zone a time or two.

Rashaad Penny, SEA – Penny had another great game last week, rushing 17 times for 135 yards and a touchdown to score 22.5 points, giving him games of 29.8 and 22.5 over the last three games (Funny how he has two games higher than any game Zeke has had over his last 11 games, but we’ll get to that in the fade section!). He appears to be locked in as the lead back right now and now he has a matchup with the Lions on tap. For the majority of the season the Lions have been a great matchup, but a few backs have struggled over the past couple weeks, so it’s not as sure of a thing as it once appeared to be. However, I’ll still take my chances on Penny at home in Seattle against them.

Antonio Gibson, WAS – Gibson has been playing well as of late, scoring 26.6, 22.1, 18.5, and 13.8 in four of his past five games (the game sandwiched in between them all was a terrible 5.1). He should be able to continue to play well as the Football Team takes on the Eagles this week in what ranks as a favorable matchup for backs. I don’t overly love his ceiling, but his price tag is very fair and he’s probably not a bad back to roll with in cash games this week (I’ll still use him some in GPPs, but generally I like to shoot for higher upside than what Gibson has been giving). UPDATE: Gibson is OUT, Patterson is a nice pivot at a very cheap price.

Ke’Shawn Vaughn, TB – RoJo is the lead back and will continue to be the lead back most likely, but Vaughn may end up being the better play of the two at a cheaper price tag. Jones stunk up the joint last week in the starting role (not shocking to me personally), rushing 20 times for just 65 yards and dropping a pass that could have very well gone for a touchdown. Meanwhile, Vaughn racked up five more yards than Jones did on 13 less carries and he also found the end zone. This week the Bucs take on the Jets and they will likely demolish them… which could mean even more work for Vaughn. The Jets rank as the best matchup in the league for running backs this season.

Ezekiel Elliott, DAL – Zeke is priced as the fifth highest back, but there’s really just nothing to like about playing him this week (or most weeks for that matter). He’s playing fine, but he’s a back in a timeshare and being priced like that isn’t the case. His highest point total over the last 11 games is 21.8 and he hasn’t scored more than 20 in any of those other 10 games. There is literally zero ceiling/upside with Zeke right now. In five of those games he scored less than 13 and in two of them he scored less than 9.1, so his floor isn’t even good either. Add to all that the fact the Cowboys are taking on the Cardinals, one of the best defenses in the league, and what purpose would there be to playing Zeke? None.