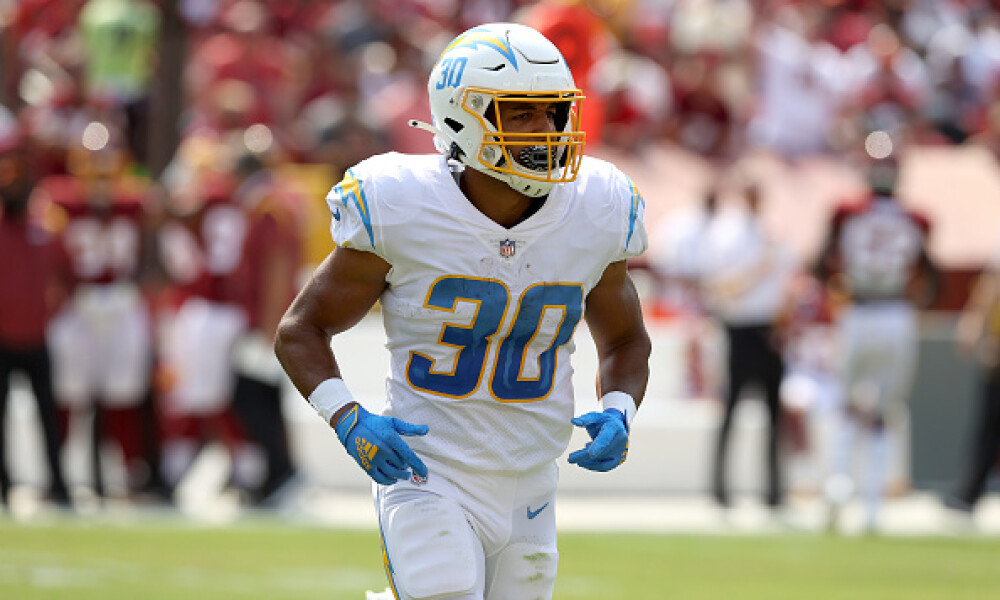 Dalvin Cook, MIN – Cook is off to a strong start with 21.4 and 19.8 points on DraftKings through the first two games this season. He has racked up at least 20 carries and at least 24 touches in both games. He only has one touchdown thus far and that has lowered his ceiling, but this week feels like a big game coming for him. This Seattle defense just gave up 237 total yards to Henry last week with three touchdowns as he dropped a 50-burger on them. Do I see Cook scoring 50? I mean that’s an outrageous number, so no, but he should be in line for a big week. He is expensive, but it wouldn’t be surprising to see him put up 30+ points. Update: As of Sunday morning it sounds like Cook is doubtful to play. Alexander Mattison becomes a decent play if Cook is ruled out.

Austin Ekeler, LAC – Ekeler is coming off a strong game in which he rushed nine times for 54 yards and caught nine passes for 61 yards to finish with 22.5 fantasy points. He should once again be heavily involved in the passing game this week when the Chargers take on the Chiefs in a game that there’s a pretty good chance they will be trailing in, which actually works to the benefit of Ekeler (unlike pretty much any other RB). He is on the cheap end of the top tier pricing and makes for a pretty good value on DK with full PPR as he should catch at least five passes in this game.

Antonio Gibson, WAS – This is a gut feeling as the matchup data doesn’t point to this being an exciting matchup for Gibson. He comes into this game fresh with the Football Team last playing on Thursday night over a week ago and he only had 15 touches in that game. I expect him to see north of 20 touches in this game and find the end zone for the first time this season. I would only consider him in GPPs as, again, the matchup is tough and the price tag isn’t extremely cheap, but it just feels like a big game is coming for Gibson where he finds the end zone twice and racks up over 100 total yards.

Myles Gaskin, MIA – Gaskin had just five carries last week as the Dolphins were completely blown out by the Bills in a 35-0 game, so you may be asking… “how can you possibly like him?” well he racked up five targets for the second straight game and has nine receptions through two games. This matchup against the Raiders should be a far better one for him and Miami. I expect to see him get at least 15 touches in this one and possibly find the end zone. Similar to Gibson though, I would lean more toward him being a GPP play as based on what we have seen he is not a safe cash play.

Clyde Edwards-Helaire, KC – CEH has been abysmal with no touchdowns, only 13.8 TOTAL fantasy points, and barely over 100 total yards through two weeks. However, he has his easiest matchup yet, has been given at least 13 carries in both games thus far, and has plummeted in price. The extreme price drop now makes him an interesting option against the Chargers who rank as one of the best matchups in football for running backs so far as they got torched by BOTH Zeke and Pollard last week. The Chiefs should bounce back from last week’s loss and CEH should get enough work.

Cordarrelle Patterson, ATL – Well this isn’t someone I envisioned myself writing about in the RB Coach this season… but here we are. He is coming off a big game in which he found the end zone twice, caught five of six targets for 58 yards, and scored 23.9 points on DraftKings. And now he gets a great matchup against the Giants, who were torched in Week 1 by MGIII and then were torched in Week 2 by the combo of McKissic and Gibson. They haven’t had answers to backs on the ground or through the air, which benefits Patterson as he does pretty well in both areas.

Joe Mixon, CIN – Mixon crashed back down to earth in Week 2 with a lousy performance in which he finished with just 8.1 fantasy points. He did get 20 carries but only managed 69 yards and he failed to find the end zone while only catching one pass for two yards on just two targets. He is priced as a high end back, but this matchup with Pittsburgh is not inspiring any confidence for me as they shutdown the Raiders rushing attack and the Bengals passing attack was a mess last week until garbage time. Mixon will need more work in the passing game this week to pay off his price tag and I am not sure I see it happening. There are just too many better options on this slate.