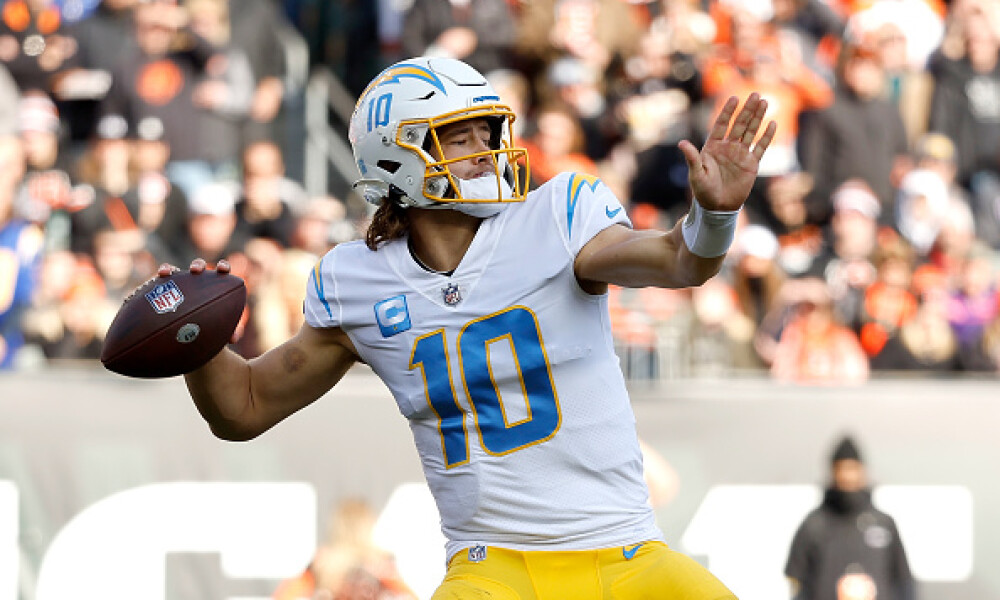 Tom Brady, TB - Brady is at home and at home this season he is averaging four touchdown passes a game and will be facing a Bills team coming off a demoralizing loss to the Patriots on Monday Night Football. Brady is also the boogeyman to the Bills, having a career record of 32-3 all-time against Buffalo. This one is adding up to being a thrashing by TB12.

Justin Herbert, LAC - Chargers are 10.5-point home favorites against a bad Giants squad so this one could turn into a blowout where Herbert isn't forced into a shootout but that matchup is still very appealing and the majority of the Chargers scoring this season has come by the way of the pass. We have gotten at least 24 FP from Herbert in four of the last five games and even if Keenan Allen doesn't suit up this week I just can't see this being a let down spot for him.

Patrick Mahomes, KC - I mean...Mahomes has been pretty bad, scoring 15 or less fantasy points in five of the last six games. HOWEVER that one game was a 406 yard, 5 touchdown performance against the Raiders who are the Chiefs opponent this week. Nobody is playing Mahomes this week as the top priced QB on DraftKings but if there was ever a matchup to take a shot, maybe this is the one.

Dak Prescott, DAL - The running game issues for Dallas have been the story in recent weeks with Ezekiel Elliott seemingly limited with an injury yet still splitting time with Tony Pollard. This week Dallas faces a Washington pass defense that ranks 30th in DVOA. CeeDee Lamb, Amari Cooper & Michael Gallup should have little trouble getting open here and I see Dak being a popular option this week in the mid-tier.

Russell Wilson, SEA- I'm thinking the mid-tier chalk this week will be Wilson as the Seahawks face off against the Houston Texans. Over the last two games Wilson has thrown four touchdowns with just one interception while connecting with Tyler Lockett and rebuilding the connection with DK Metcalf. We are getting these plays at a nice value because of their prior struggles; the prices have all dropped from where they were previously priced when playing together earlier in the year.

Taysom Hill, NO - Hill threw four interceptions against the Cowboys last week yet still finished with 27.66 DK points thanks to his rushing ability which saw him go for 101 yards on 11 carries which added to his 264 yards passing with two touchdowns and the aforementioned four interceptions. Hill faces off against the Jets this week which is a team that ranks among the worst defensive teams in the league.

Cam Newton, CAR - Listen, I know he was AWFUL against the Dolphins but we kinda told you that was likely to happen as teams will often get the "Miami Flu". Now back home this week, fresh off a bye and facing a putrid Falcons defense I think there is reason for optimism with Newton this week. Am I telling you to build your core lineup around him? No, but, he does have 20+ FP upside.