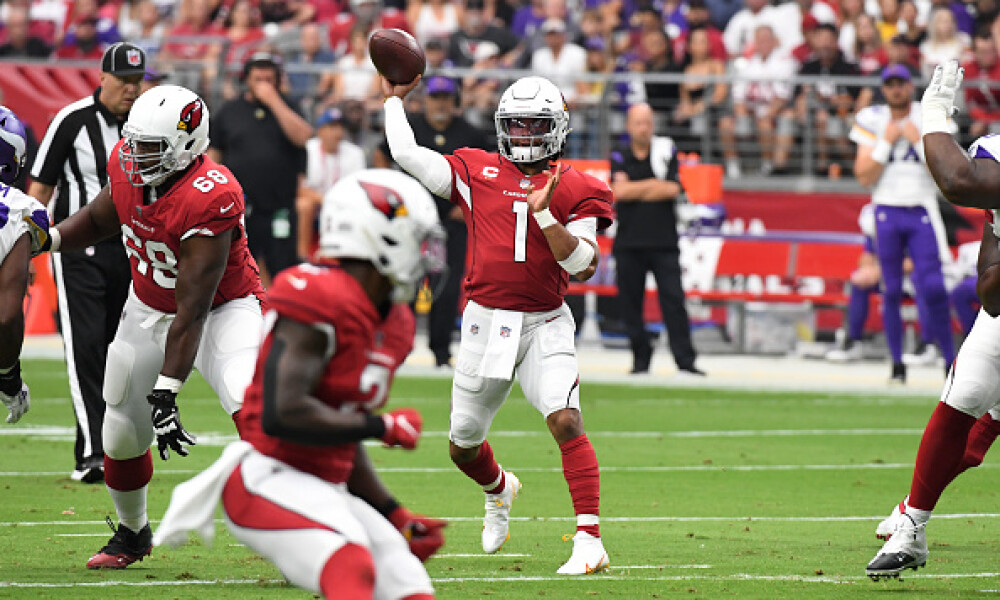 Kyler Murray, ARI – Murray is averaging 36.3 DK points per game through two games this season and now gets the Jacksonville Jaguars who made Teddy Bridgewater look like Warren Moon in Week 2 as he threw for 328 yards and two touchdowns.  In Week 1 the Jaguars allowed TyRod Taylor to throw for 291 yards and two touchdowns…. There is a reason why Kyler is the most expensive QB on the slate and for me, anything less than 350 and three touchdowns would be disappointing against this woeful Jaguars pass defense.

Lamar Jackson, BAL – This one here feels like it could be the chalk this week as the Ravens face off against the Detroit Lions. Jackson was just on the national stage taking it to the Kansas City Chiefs on Sunday Night Football. In that game he threw for 239 yards with one touchdown and two interceptions while adding 107 yards rushing and two rushing touchdowns. In Week 1 the Lions allowed over 300 yards passing to Jimmy Garoppolo and in Week 2 Aaron Rodgers lit them up for four touchdowns. I Look for Jackson to put up yet another multi-touchdown effort here while running for close to 100-yards once again.

Patrick Mahomes, KC – Ok, listen, Mahomes is always in play. You shouldn’t really need me to put him in the QB coach any week he is on the main slate but when I leave him off, I am inundated with questions about why I don’t like Mahomes this week. I do, I think he is a great contrarian pivot off any of the guys mentioned above. He has thrown for six touchdowns while rushing for another over two games this season. He has one of the best pass catching duos in the league with Tyreek Hill and Travis Kelce. All these guys are expensive, but they can be the difference between cashing and not cashing in a given week. Mahomes is ALWAYS in play.

Justin Herbert, LAC – Through two games this season Herbert has completed 70-percent of his passes while going over 330 yards in each contest. The thing holding him back from slate breaking type production is the lack of touchdowns as he has thrown only two despite going over 40 attempts in each game and all those yards. Herbert should find him in another shootout this weekend as the Chargers face the Chiefs where Los Angeles will need to score points to keep pace.

Kirk Cousins, MIN – Cousins has been nails through the first two weeks of the season, completing 71.6-percent of his passes for 595 yards and five touchdowns. In Week 2 he threw for 244 yards and three scores against the Cardinals. Week 3 will bring about the first home game for the Vikings in a great matchup against Seattle who has a less than impressive defense. I look for another solid outing for Cousins at a great mid-tier value.

Matthew Stafford, LAR – Many will see the matchup against the Buccaneers and look to avoid it give then reputation they have across the industry as a stout defense but through two games this season opposing QB’s haven’t had too difficult of a time throwing the football against them. In Week 1 we saw Dak Prescott throw for 403 yards and three scores. In Week 2 Matt Ryan completed 70-percent of his throws for 300-yards and two scores as well as three interceptions. Stafford has looked as advertised through the first two weeks of the season and could find himself in a high scoring contest here given how Tom Brady and the Bucs offense has looked so far this season.

Derek Carr, LV – If Carr is healthy enough to go in Week 3 then he becomes a very intriguing value option as the Raiders are home to face a Dolphins team that struggled last week against the Bills. Carr has done anything but struggle to begin the season, completing 66.7-percent of his passes while throwing for totals of 435 yards in Week 1 and 382 yards in Week 2. Carr has two touchdown passes in each of those contests and if Josh Jacobs is not able to suit up, the offense will be pass heavy once again.

Teddy Bridgewater, DEN – Bridgewater has been outstanding through two weeks, completing 77-percent of his passes while throwing for 264 yards in Week 1 and 328 yards in Week 2. He has two touchdown passes in each contest and now faces a very bad Jets defense that will be on the road in Denver. This feels like another multi-touchdown game from Bridgewater is in order.

Daniel Jones, NYG – I cringed typing out the name, but I am a slave to the scoreboard here and what I see is fantasy point totals of 22.38 and 29.46 through two weeks from Jones. In Week 3 the Giants have a home matchup against a Falcons defense that has been lit up by the likes of Jalen Hurts and Tom Brady alike over the first two games of the season. Jones could even be getting Evan Engram back for this one which is a favorite target of his. The mobility for Jones is an added bonus as he has run for a touchdown in each of the first two games this season and had 95 yards rushing in Week 2 against Washington.

Justin Fields, CHI – It is looking like Fields may get his first NFL start here in Week 3 with Dalton dealing with an injury that his him listed as “week-to-week”. While Fields is an exciting prospect, we did get a small glimpse of him last week and it wasn’t anything good as he completed just 46.2-percent of his passes for 60 yards and an interception. Fields rushing ability will help with his upside but being on the road against the Browns who should have a good defense, could make for a long day for the rookie that I just do not want to be part of.

Josh Allen, BUF – Too expensive right now given the production. Through two weeks Allen is completing less than 60-percent of his passes while delivering just 17.66 and 18.2 fantasy points over the first two weeks. In Week 3 the Bills return home but face one of the leagues best defensive fronts in the Washington Football team who have a pass rush that could cause issues for Allen if he isn’t playing under control.