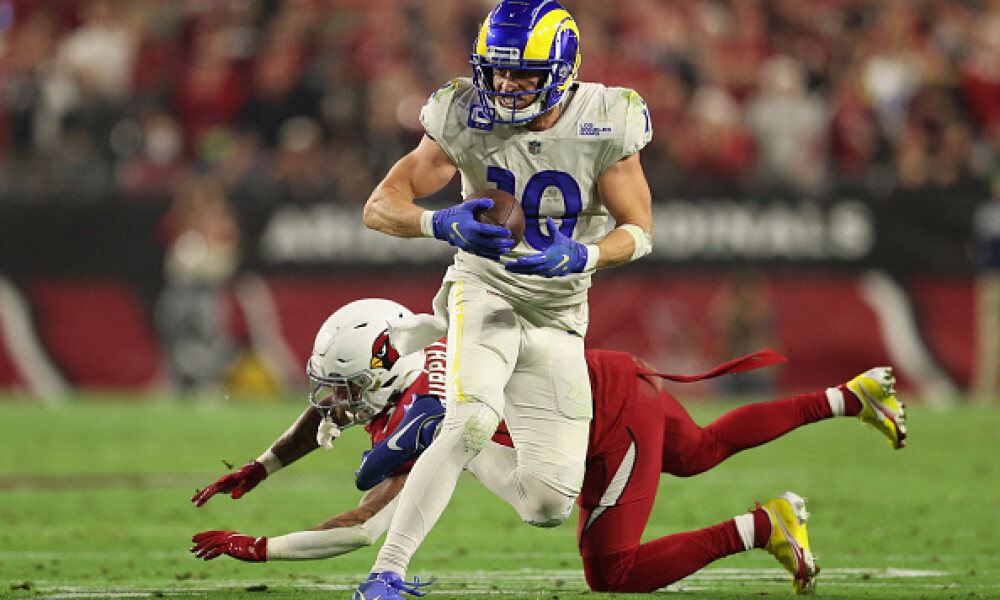 I’m not selling out taking Kupp here, I’m just being realistic. The guy is unstoppable and has been each and every week this year. He’s averaging 28.4 DKP/game this year and has topped 30 DKP SIX times this season! This is a WIDE RECEIVER we’re talking about. He has nine or more targets in EVERY game this year, hasn’t had less than seven receptions in a game since Week 5 and has six 100 yard games since Week 6. The Vikings have allowed the most yards and fantasy points and third most receptions to opposing receivers.

When you look up consistency in the dictionary, you’ll find a picture of Keenan Allen’s face plastered right next to it. Allen has topped 15 DKP in seven straight games and has double-figure targets in all but one of those games. Receivers are averaging 167 yards per game against the Houston secondary this year and the Chargers currently have the third highest implied team total on the board. Everything’s lining up for Allen to continue to dominate opposing secondaries in Week 16.

I’m not going to make it seem like I’m targeting Chase after he put up 200 yards and a score against Baltimore earlier in the year, but I’m also not going to ignore that fact either. Chase hasn’t had many huge games since, but he has 10 touchdowns on the year and the Ravens depleted secondary has served up 14 scores to the receiver position alone this season. Baltimore has two of the worst corners in football starting right now as one is the 94th rated CB of 117 qualified and the other as a 39.2 score, which is the 208th best mark on a list of 221 CBs. Chase could have another breakout performance here against Baltimore.

With a match-up against the Lions on the horizon, Gage is in such a nice spot to continue his recent stretch of fantastic play. He’s put up 18+ DKP in three of his last four games and has had six targets or more in five straight games. Detroit is 26th in DVOA against the pass this year to boot. Gage has 60+ yards in four straight, has caught five or more passes in four of his last five as well. This game will not be sought after considering it’s a measly 42.5 over/under, so Gage may check in a lower draft percentage than he should in tournaments.

Even without Urban Meyer in town, Treadwell played a prominent role in Jacksonville’s offense as he led the team in receptions (6), targets (9) and yards (57). He played the most snaps out of all the receivers, missing just two passing downs on the entire day. He’s now topped double-digit fantasy points in three straight games, has had four or more receptions as well has 50+ yards in each of the last four. The Jets are dead last in pass DVOA defense, so this could be the game Treadwell takes the next step in and is so cheap across the industry.

The Bucs are hurting offensively right now. REALLY hurting. There are a lot of question marks at the receiver position as Antonio Brown’s suspension has been lifted, but he had been out with an ankle sprain to begin with. Mike Evans left last week's game and was unable to return and he hasn’t been ruled out of Week 16, but we’re a little unsure if he’s going to play. Chris Godwin is out for the year and Breshad Perriman could return from the Covid-19 list, but we’re unsure. All that to say Tyler Johnson is still just hangin’ around. He played 95% of the snaps in Week 15 and if a few of these guys are out, expect much of the same again against Carolina. We’ll have to watch how this situation plays out for the rest of the week.