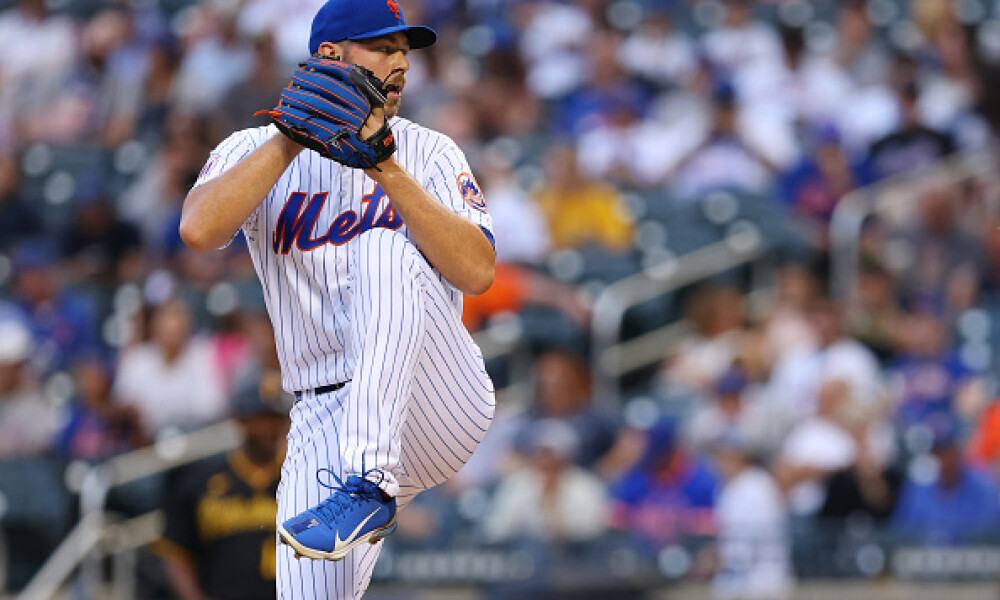 A slate loaded with southpaws, there's some tough match-ups, low priced starters who may not last five innings and a tough mid-tier with more questions than answers. All of this adds up to choosing targets who fit your build with a range of options. Note the price differentials on one of the pitchers below and as always, best of luck playing tonight's MLB DFS contests.

There's a price to be paid for security on this slate and Buehler's atop the list for good reason. He's yielded one earned run over his last two starts against his team's rival San Francisco racking up 16 strikeouts in 14 innings of work. His last 30 days comes with a 3-0 record in five starts, a 1.69 ERA, 37:9 K:BB, 0.88 WHIP and 29.8 strikeout percentage in 32 innings. In what may be a low scoring game by the bay, targeting the team desperate for a win makes total sense in this match-up.

If looking for a little salary relief on FanDuel but prefer an “ace”, pivoting to Wheeler makes sense. First, the Nationals will be without Trea Turner in the lineup due to COVID, plus may pull a player during the game in case of a trade. Although Wheeler's 0-2 against Washington this year, he owns a 19:7 K:BB in 16.1 innings against them and he's won three of his last four decisions overall. Focus on his 3.08 ERA with 30 strikeouts his last four starts spanning 26.1 innings with a 27.5 strikeout percentage and 1.18 WHIp in them. Pretty, pretty good.

Desperation and momentum lead us to a Mets rookie. Megill's won his first major league game his last outing and recorded 29 strikeouts his last 25.2 innings of work with a minuscule 1.75 ERA, 1.09 WHIP and 20.2 strikeouts minus walks percentage in them. His home ERA of 1.89 and his ability to depress production by right-handed hitters (.164 batting average against this year) sets him up for success against Atlanta this evening.

Due to his price point on DraftKings, there's better options out there unless looking for a low owned dart as your SP2 in tournaments. However, on FanDuel, he makes for an interesting pivot in GPP's facing the Rangers on the road. Globe Life depresses power and Bumgarner owns a 32.7 strikeout percentage against players on the Rangers roster over his career with a 0.91 FIP and .270 weighted on-base average against according to Statcast. Plus, the Rangers struggle facing southpaws with a team weighted runs created plus metric of 84, second lowest in the majors. If MadBum logs six innings with six strikeouts and gets the quality start bonus, he's well worth the shot on FD.

Facing a team with a for sale lawn at the entrance of PNC Park, Houser hopes to replicate his performance against them earlier this year when he tossed 6.2 innings giving up one earned run with five strikeouts against two walks and the win. There's no guarantees in life, or DFS, but Houser's in a prime spot to succeed and could return three times value compared to his price this evening.

Not for the faint of heart, Holloway issued five walks his last time out but only yielded two earned runs despite his lack of command. Tonight, he faces the Orioles who boast a 24.6 strikeout percentage over the last 30 days and Holloway notched 12 in less than 10 innings his two starts prior to his outing against the Padres referenced above. If he reaches five innings with five-plus strikeouts and his team hits well against Baltimore's starter, a cheap win with some room for upside could be in play. Again, a tournament only option as a second pitcher on DK, but a sneaky one if it hits. Also of interest, Kris Bubic at home against the White Sox with a safer floor.