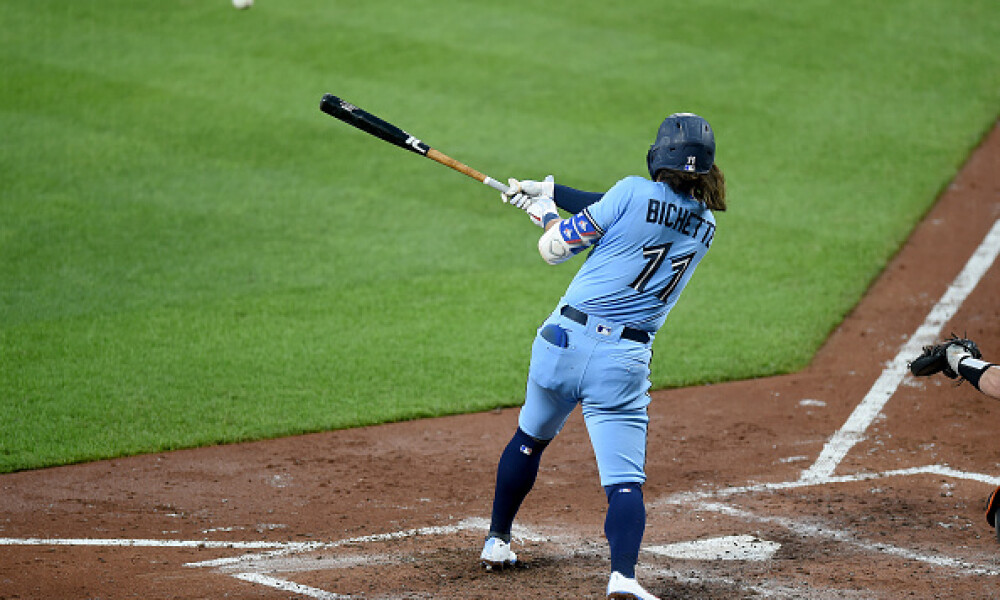 A smaller slate on Monday night with three contests carrying a double digit run total. Many will be attracted by the bats in Boston on either side of the match-up, which makes sense but crafting a lineup providing balance may be the deciding factor. Remember, on a more limited slate, use discretion and be sure to play more cash contests than tournaments in this type of environment and best of luck.

With Thomas Hatch slated for the start in Boston, it may signal the Toronto bullpen may be involved by the fourth inning. Devers owns a robust home run every 11.6 at-bats versus right-handed pitching this year with a .355 isolated power, .645 slugging percentage and a 1.005 OPS over 261 plate appearances. His batting average at home rises to .315 versus right-handed pitchers making him one of the most alluring targets tonight.

Perhaps on the precipice of a heater, Bichette's racked up five hits his last two games, including a home run. He's hit 13 of his 17 home runs against right-handed pitching this season and loves facing Nick Pivetta (R). In 10 previous plate appearances, he's 6-for-9 with two doubles, a home, a walk, a 10 whiff rate plus a .744 expected slugging and a .480 expected weighted on-base average (xwOBA). Past success in the midst of an uptick in production in a must win game makes him a worthy spend up in tonight's slate.

Amidst a very up and down season, there's one constant for Bryant, hitting left-handed pitching. Facing southpaws he's recorded a .387 isolated power, a .720 slugging percentage, 1.132 OPS and robust 197 weighted runs created plus metric. Through 85 plate appearances this season he's produced five doubles and eight home runs (one every 9.4 at-bats) with a .333 average. Plus, he's 8-for-18 in past meetings against tonight's starter, Wade Miley (L), with two home runs, a .377 xBA, .626 xSLG and .454 xwOBA in them. Hope he adds to his trade stock with a strong Monday night match-up in a prime spot.

When targeting players, getting at-bats helps DFS players since they translate to more chances to accumulate points. Since the onset of the second half, Baddoo's slashing .273/.314/.606 with eight runs, three home runs, 10 RBI and a stolen base over 35 plate appearances. This comes with a .333 isolated power which becomes more important seeing his opponent tonight, Michael Pineda (R), gives up 2.03 home runs per nine innings this year facing left-handed hitters. Add it all up, along with the reduced price tag and it's yabba, dabba, Baddoo.

Note the different positional eligibility on the two sites, but do not overlook Vaughn in this tasty match-up. First, he's generated 10 doubles and five home runs versus left-handed pitching this season with a .304 average and a home run every 15.8 at-bats. His .316 isolated power, .620 slugging, 1.022 OPS and current five-game hit streak (nine for his last 17) with three multi-hit games add to his allure. Over his last 22 games, Vaughn's slashing .351/.373/.636 with 14 runs, seven doubles, five home runs and 12 RBI with a 47.8 hard hit rate. Giddy up.

It's been a lost season to this point for Soler, but he's showing signs of life with four home runs over his last five contests. So far in the second half, he's recorded more walks (five) than strikeouts (four) with a .480 isolated power, .720 slugging percentage and .444 wOBA. Since he's streaky, a better GPP option than cash game play but knowing he's hot, ride the wave in the event he crushes another dinger this evening.

At near minimum pricing, why not take a chance on Rooker in a tournament lineup? Newly promoted, he hit 16 of his 19 home runs at Triple-A off of right-handed pitching and Matt Manning (R) is a reverse splits starter giving up more production to right-handed hitters. In his debut, Rooker hit second in the lineup and if this sticks, he makes for an intriguing under the radar option on this slate armed with a .591 slugging percentage and .373 OBP versus right-handed pitching this season in the minors.