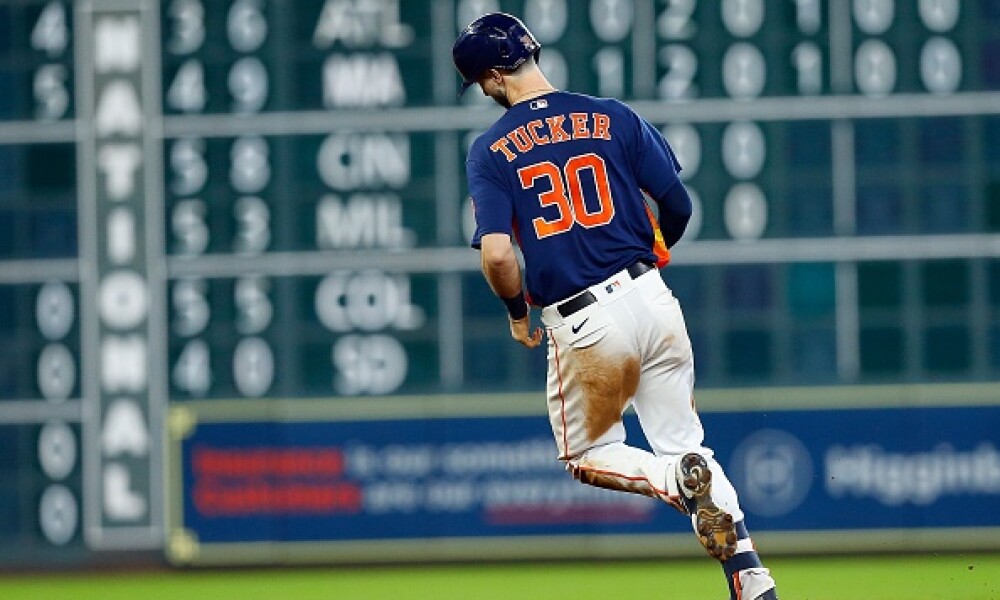 Monday night's slate does not feature premium pitching and there's one weather concern in Atlanta, so targeting the correct hitters may decide one's DFS fate. Despite some pitching match-ups still not listed, use the data from recent performances along with split advantages when mining for upside and safe floors.

With at-bats at Sahlen Field waning, look for Guerrero Jr.'s power surge in this ballpark when paying up on this slate. Through 47 games in Buffalo, he owns a robust .328/.396/.655 slash with 14 home runs and 41 RBI. Since the All-Star break, he's recorded three hits, all home runs, driving in five. Expanding his results to the last 14 days, his .444 isolated power, 1.074 OPS and four home runs in eight games jumps off the page. As a sweetener, he's also 3-for-5 in previous meetings against Nick Pivetta with a double, home run and a walk in six plate appearances fueling a .387 xBA, 1.218 xSLG, .660 xwOBA plus a 101.3 MPH average exit velocity of his batted ball events.

Who fixes their swing at the All-Star game's home run derby? Perhaps it's Soto. He's launched three home runs in three games thus far in the second half with seven hits in 13 at-bats (.538), five runs and six RBI. Over his last 10 games he owns a 67.9 hard hit percentage (19 hard hits in 28 batted ball events) with five barrels, five home runs and 24 runs plus RBI while slashing .405/.511/.838 spanning 47 plate appearances. With baseballs jumping out of the park in Washington all weekend, focus on his .432 isolated power and .541 wOBA the last two weeks and plan on him feasting on a tired Marlins bullpen tonight.

Cleveland arrives in town with J.C. Mejia slated to start despite giving up at least six runs in three of his four previous starts. He also gives up 2.16 home runs per nine innings to left-handed hitters. Enter Tucker with a reduced price point despite owning a .333/.375/.667 slash his last two weeks over nine games and 32 plate appearances with two home runs plus three stolen bases. Making a build for DFS with a hitter who could hit a home run or steal a base or provide a combo meal equates to upside. He's generated four barrels (17.9 percent) and 11 hard hits (47.8 percent) of his last 28 batted ball events with a .333 isolated power making this a plus match-up this evening.

Another multiple eligibility player in a smash spot on Monday's slate, Escobar may be traded soon but it's not affected his recent results sporting a .313 isolated power with three home runs over his last 36 plate appearances with 15 runs plus RBI. Chase De Jong averages almost two home runs per nine innings on the road putting Escobar in a nice situation and his home run yesterday may be replicated this evening.

A veritable hit machine since taking over at first base for the Pirates when Colin Moran landed on the injured list with a .486/.525/.568 slash his last 40 plate appearances with only five strikeouts. Now add in Caleb Smith gives up 1.66 home runs per nine innings this season and Nogowski's 5-for-11 versus southpaws this year in a limited sample with an on-base rate of almost 54 percent. He's recorded double digit points in DFS contests in three of his last four contests and if he racks up an extra-base hit, or dare we speculate a dinger, his return on investment spikes helping one absorb the top tier bats with a safe floor with room for upside.

Speaking of upside, Jared Eickhoff will bring his 8.44 home runs per nine innings against left-handed hitters to the launching pad called Great American Ballpark in Cincinnati. This means it's time Naquin awakens from his home run drought. He last hit one on July third but may hit clean-up in a game with a total rivaling the one in Buffalo and a pitcher giving up hard contact like it's candy on Halloween. Noting Naquin's averaged a home run every 13.5 at-bats facing right-handed pitching in home contests suggests he's well overdue and may pay off handsomely in a primo match-up tonight.