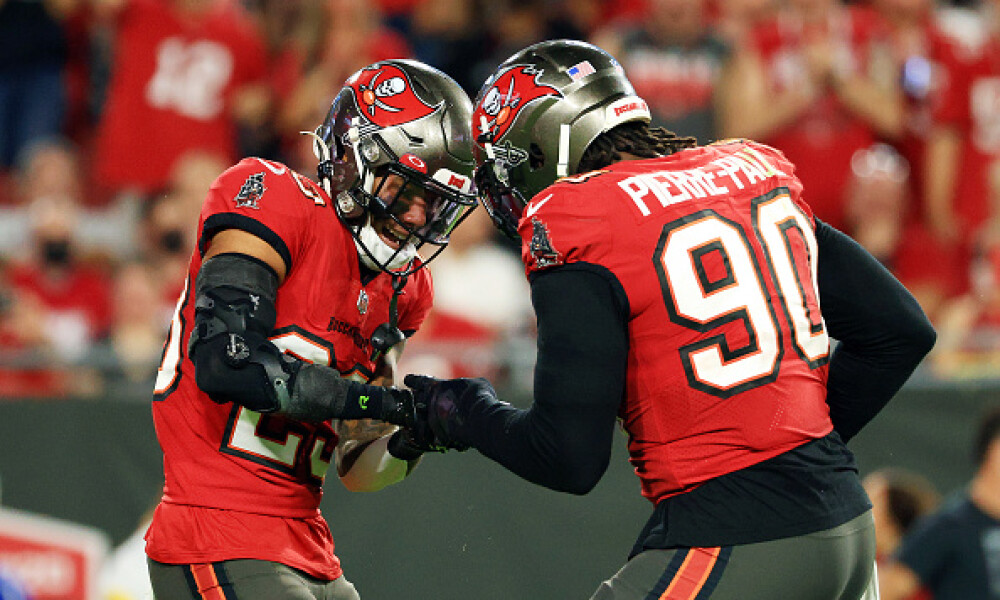 Tampa Bay Buccaneers – I will not be paying up to the Bucs in Cash games this week, but $4,100 on DraftKings isn’t an awful price tag for this defense. The Panthers could be seeing another quarterback change this week as they’ve alluded to Sam Darnold getting some snaps as he makes his return. But Vegas is only giving Carolina about 17 implied points and the Bucs are tied for fifth in the league with 25 takeaways. The Bucs limited the Saints to just nine points last week and it could be another safe week for Tampa to go out and register eight-to-ten points, but as always, they possess a high ceiling. My lone concern with Tampa is that they’ve typically allowed more points to be scored on the road than at home and that’s why they’re averaging just six fantasy points per game on the road. But this week I think we see closer to double-digit points given the state of the Panthers offense and we could get three-to-five sacks from Tampa.

Kansas City Chiefs – Last week wasn’t great for Kansas City. They gave up 28 points and over 400 yards of offense to the Chargers. The good news, is they’ll get Chris Jones back this week and they’ll be hosting the Steelers in Arrowhead on Sunday. We don’t really know what kind of performance they’ll get from Ben Roethlisberger. To no surprise, he’ll be playing through injury. The Chiefs have forced both an interception and a fumble in six straight games with 17 total takeaways in that span. Jones’ presence means there will be more of a pass rush as well. $3,500 seems like a light price tag given that we know this defense has a 15+ point ceiling.

Los Angeles Chargers – The Bolts aren’t typically a D/ST I get jazzed about rostering, but when you’re playing the Texans I can get on board. Vegas is giving Houston an 18-point projected total and they’ll be hosting the Chargers on Sunday which does help their case. We’ve seen the Texans put up 14 or fewer points on offense in eight of their last ten games, but they’ve looked a little better with Davis Mills under center. The early start time for Los Angeles is mildly worrisome but not a deal breaker. I expect multiple turnovers and a relatively easy path for 2X-3X value for Los Angeles on Sunday as long as Derwin James can stay on the field, but he is currently dealing with a hamstring injury for what it’s worth.

Seattle Seahawks – I don’t really like the price on FanDuel as the fourth-most expensive D/ST on the slate. However, I do like the price on DraftKings at just $3,000. Honestly, I considered the Seahawks as a fade earlier in the week, but with Justin Fields’ battling an ankle injury that could leave him out for this game, I’m willing to look at the Seahawks. They’re nearly favored by a touchdown and the over/under is sitting at a lowly 42.5 points. Andy Dalton hasn’t lit it up for the Bears by any means and in his last appearance he threw four interceptions. Seattle’s also been providing a very nice floor for DFS so if you prefer them in Cash games for that very reason, I wouldn’t fault you. They posted seven, six, nine, and eight fantasy points over their last four games. That kind of 2X-3X return on DraftKings makes them a fine play at just $3K.

Denver Broncos – The Broncos are a borderline value play on all sites, so while I’m including them in the mid-tier you can easily make an argument for Denver being a slightly more expensive value play. Regardless of the semantics, Denver’s been trending in the right direction. In seven of their last eight games, they’ve limited the opposing offense to 17 or fewer points. This game is virtually a pick ‘em as the Raiders are pretty beat up and coming off a short week of preparation after barely beating the third stringers on Cleveland. Vegas also doesn’t expect a ton of scoring for this game with the over/under sitting at 41.5 points. My lone reservation would be to just keep exposure to GPP’s and maybe pay up or down to another D/ST in Cash games. While Vegas may not expect a lot of scoring, the last three games between these two teams have all seen at least 49 points scored so tread with some caution.

Cincinnati Bengals - I'm adding the Bengals as a late addition to the D/ST Coach. With Lamar Jackson and Tyler Huntley both OUT for this game, exposure to the Bengals is fine in both formats. The Bengals returned six fantasy points against the team earlier in the year and that was with Lamar Jackson active and running for over 80 yards against them. I'm not going to disrespect Josh Johnson because he is a journeyman quarterback who worked his tail off to get back to this point in his career. But the Ravens are beat up in so many different aspects of the game that Cincy should be able to return that coveted 2X-3X value we seek.

Chicago Bears – I’m not opposed to playing Chicago this week, but I also don’t like playing D/ST’s on the road. I won’t let that nugget be the deciding factor regarding with D/ST I target in Cash games. The Bears haven’t been forcing a ton of turnovers but they can get plenty of pressure on the quarterback and Seattle boasts the fourth-worst pass protection grade according to Pro Football Focus. The Bears have 19 sacks in their last six games and they certainly are prone to giving up points. But has Seattle’s offense done anything to warrant any fear? They’ll get Tyler Lockett back this week, but Russell Wilson looks like he’s been scouting real estate in other markets as he’s by far had an underwhelming season by his standards.

Minnesota Vikings – The Vikings might be my favorite punt this week, but I don’t hate the next team either. Let’s touch on the Vikings as they may be the safest D/ST in this range. For starters, they haven’t ever been caught in the negative for DFS this year. They’ve always returned positive points. While the total may never blow you away, they do enough and at the bare minimum price tag we can get on board. In this price range you’ll rarely find a team favored, but the Vikings are just three-point underdogs and while the over/under is high at 49 points, I’m not too concerned about that. In Weeks 12-14 we saw the Vikings give up 28-34 points and they still returned six, six, and nine points individually. They are able to return enough value because they can get enough pressure on the quarterback. The Rams may rank first in pass protection according to Pro Football Focus, but Minnesota leads the league in sacks and they’ve recorded at least two in every single game this year.

Carolina Panthers – Truthfully, I don’t hate the idea of punting down to Carolina on any DFS site. They are huge underdogs currently, but this total opened at 48.5 points and it’s now been bet down to 43. While Carolina may be a ten-point underdog it’s clear that we expect minimal scoring. The Bucs were just shut out on Sunday night at the hands of the Saints, and sure they have a pretty good defense in their own right. But Tampa will be without Leonard Fournette and Chris Godwin, while Mike Evans is also unlikely to play. That still leaves Tom Brady with Antonio Brown and Rob Gronkowski as his most trusted pass catchers, and we know Ronald Jones traditionally steps up when Leonard Fournette is out. However, Brady’s also been turning it over at a slightly higher clip than we’re used to with eight interceptions over his last seven games. And we’ve seen the Panthers return at least seven fantasy points on eight occasions this year and that mark would be a 3X return. And even if they were only to return three or four points, you’ll take it in Cash games.

Pittsburgh Steelers – I’ve struggled to gauge where ownership could land this week on Pittsburgh. Our draft percentage forecaster is light on them, and while this may not be a bold take it’s the only team that I’m staunchly against playing. I know the Chiefs could be without Tyreek Hill and Travis Kelce for Sunday’s action. But the other side of the ball will still have Patrick Mahomes running the offense and I wouldn’t be one bit surprised to see Mahomes drop 300+ passing yards and multiple touchdowns with the likes of Byron Pringle, Josh Gordon, Mecole Hardman, etc. If Pittsburgh was $500 cheaper, maybe I bite. But this mid-range price tag just isn’t worth the risk in any format.