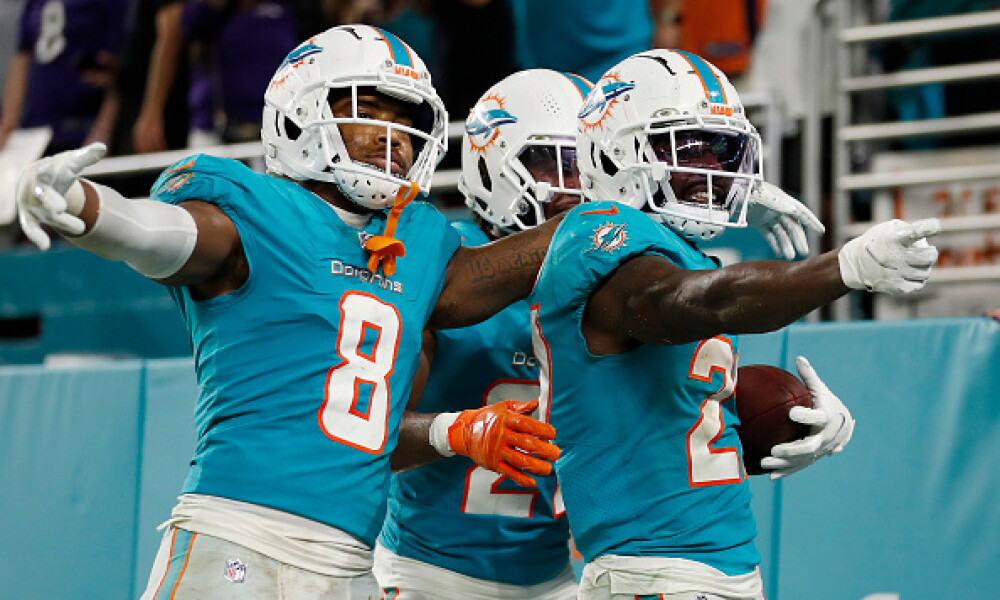 Tennessee Titans – The Titans have been quite the commodity in DFS lately. Last week they were in the value tier and this week, with a matchup against the Texans they are firmly in the top tier. We’ve seen the most expensive D/ST some weeks priced well over $4,500 so it’s not an awful price tag at $3,900 on DraftKings and $4,600 on FanDuel. This defense has kind of done it all over the last month. They’ve held five straight opponents to under 100 rushing yards, four straight opponents to under 300 passing yards, and they’re generating pressure and forcing turnovers. There’s a small concern for garbage time with the Texans, especially with TyRod Taylor healthy, but not enough to completely get me off the Titans this week.

Miami Dolphins – Might as well talk up the other chalky option this week. Miami visits the Jets this week, but I’d be lying if I said a small part of me didn’t think this could be a trap. The Jets are going with Joe Flacco under center this week and while the name doesn’t strike fear into the hearts of DFS players, he’s a veteran that will likely get the ball into the hands of his best players. The Dolphins defense has gotten better against the run after surrendering a billion yards on the ground to start the year. I might be rounding to the nearest billion, but they’ve allowed just one team to rush for over 100 yards in their last five games. That being said, the Jets haven’t been shy about getting Michael Carter more involved which is why I feel this is somewhat of a trap. My gut tells me Carter has a big day, but I could be wrong. But the Fish are a nice bet this week for DFS. Personally, I’m sticking with my one lineup strategy for the main slate and refuse to pay up for a D/ST. But both Tennessee and Miami are logical plays in Week 11.

Baltimore Ravens - I'm adding the Ravens this week given that I completely overlooked the matchup against Chicago. Justin Fields and the Bears offense has looked awful this year and while this Ravens defense isn't as great as we've seen in recent years, we're still getting John Harbaugh against a rookie quarterback. And this is a matchup that can be exploited in both Cash and GPP formats.

Cleveland Browns – Cleveland’s price tag on FanDuel is absolutely ridiculous so you do not need to pay $5,000 over there but on DraftKings they’re a modest $3,100. The only problem is that there are some cheaper options that can really open up salary for the rest of your roster. But if you’re looking to grasp at the low hanging fruit, the Browns do host the Lions on Sunday and while Detroit won’t lose every game this season, it’s possible they still go winless. This game opened with the over/under at 46.5 points and it’s been bet down to 43.5 while the Browns are still favored by 11.5 points. Cleveland is a bit of a mystery on both sides of the ball, but the Lions have been so bad on offense and Jared Goff has eight total touchdown passes this year and just one in his last five games. 3X value is within reach on DraftKings, but again you can save money by going cheaper.

Carolina Panthers – The Panthers are no stranger to this article. Hell, even last week they proved to be a great 5X value. They’ve returned at least seven points on DraftKings in five of their last six games and I maintain that there is some solid, young talent in this group despite the secondary being a bit beat up. They can put pressure on the quarterback, and they’ve forced six turnovers over their last three games. They’ve also allowed just 41 points total to opposing offenses in their last three games although those came against the Cardinals without Kyler Murray, the Patriots, and the Falcons. But this week they host the Washington Football Team and that offense is, at best, on par with those teams and that might be a generous statement. I’ll take the discount with the Panthers favored by a field goal with the over/under sitting around 42.5 points.

Minnesota Vikings – The Vikings are this week’s “position of variance” pay-down option and truthfully, I feel decent about them at this price tag. They’ve recorded multiple sacks in every game this season including 16 over their last five games. They can bleed points and yards, but combine the sacks with some turnovers and they’ve actually been a decent D/ST. The matchup against Green Bay forces their price tag down because it’s a home game so the indoor aspect means this could be a shootout. Aaron Rodgers hasn’t practiced this week due to a toe injury, but he is expected to play on Sunday. I do think Minnesota can do enough to return five-to-seven points which you’ll take in Cash games. This game opened with the over/under at 50.5 but it’s since been bet down to 47.0 so maybe we don’t see as much offense as we initially thought.

San Francisco 49ers – After completely whiffing on last week’s fade, there’s some pressure to bounce back this week. This just comes down to salary management. We saw the 49ers defense show up Sunday night against the Rams. That being said, they’ve been a somewhat underwhelming group on the year. And the matchup this week is tasty as they get the Jaguars. But in this range you could go to either the Titans or the Dolphins as well in matchups that are just as good. And as always you could easily pay down. But the 49ers are traveling East for this matchup and it’ll feel like a 10:00am game for them. It’s just not a spot that I feel needs exposure this week given the other matchups in this range and the availability to spend down. The Jags are normally a team worth targeting with a D/ST but this is a week I don’t think we need to pay up for San Francisco on the off chance the Jags come out and surprise everyone.