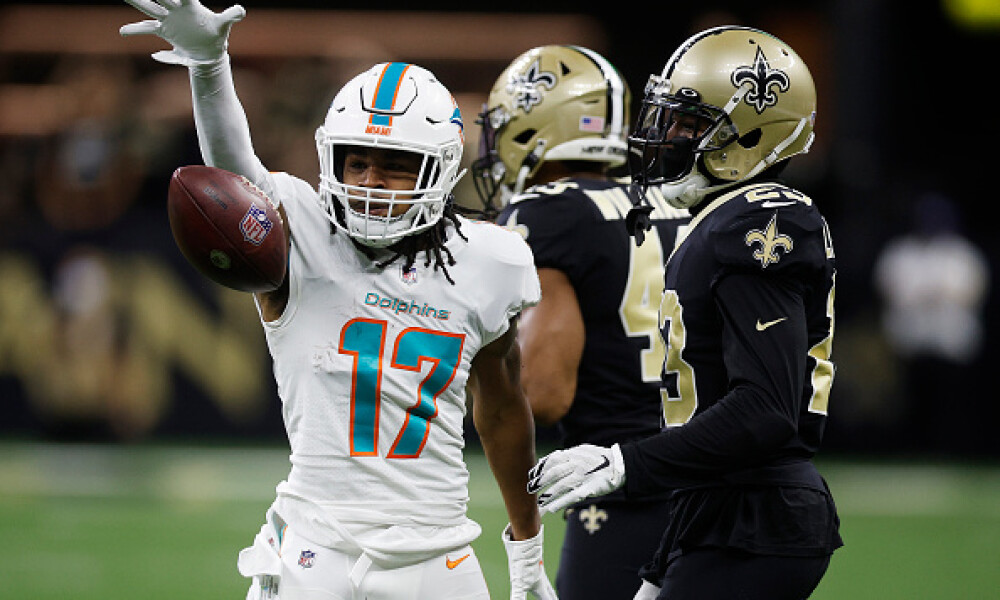 Cooper Kupp, LAR - No analysis is really needed here. He’s worth every penny. Baltimore’s secondary has been abused this season and just let Joe Burrow go up and down the field with little to no resistance through the air. The Ravens have allowed the fifth-most fantasy points to wideouts this season, and the most over the last four weeks. Baltimore also ranks 30th in DVOA against the pass, and people tell me that Kupp has been the best receiver in fantasy this season.

Deebo Samuel, SF - Samuel is just so involved in the San Francisco offense and with Trey Lance likely under center, expect some “gadgety” plays for Samuel in abundance as they look to make things easy for the rookie signal caller. Screen passes, hand offs, tosses and everything in between should be in store for Samuel in this one, and if you watch the Texans play, they miss tackles, especially on the perimeter. I really like Samuel to find the end zone at least once in this contest.

Jaylen Waddle, MIA - It’s almost as if Tua Tagovailoa only has eyes for Waddle! The rookie has at least eight receptions in four of his last four five games, and he has at least nine grabs for 90 yards on 10 targets in three straight contests. It’s hard not to play him this week in a great matchup against a Tennessee secondary that has been generous to opposing wide receivers all season long.

Amari Cooper, DAL - Give me the Dallas passing attack this week. The Cardinals have allowed eight touchdowns to receivers over the last four weeks, and they are within earshot of the Ravens for most fantasy points allowed during this four-week stretch. Cooper is averaging nearly eight targets per game over the last three weeks, and unlike CeeDee Lamb, Cooper is finding the end zone of late. Also, as a bonus, Cooper is cheaper than Lamb on both DraftKings and FanDuel. Yes, please!

Brandin Cooks, HOU - San Francisco is 28th in DVOA against the opposition’s WR1 and that is unquestionably Brandin Cooks. Davis Mills tends to lock onto Cooks, and he’s the splash play guy in the Houston offense. My biggest worry this week with Cooks is that Mills has drastic home/road splits. At home this year, Mills has a 9:1 TD/INT ratio with 237.3 yards per game, whereas on the road he has a 3:8 TD/INT ratio and just 155.2 yards per game.

Odell Beckham Jr., LAR - Even if the overall yardage hasn’t been there, Sean McVay has made Beckham an instrumental part of the game plan in the red zone. He’s scored in four of his last five games with the Rams, catching at least four passes in three of those contests. If there’s a team for Beckham to continue this streak against, at a reasonable price, it’s certainly this week against the Ravens. It might be chalky, and even if it doesn’t result in 500+ passing yards, the quartet of Matthew Stafford, Kupp, Beckham and Van Jefferson could be quite lucrative this week as Baltimore can’t stop a nosebleed.

DeVonta Smith, PHI - Dallas Goedert has been getting a lot of the publicity of late, and rightfully so, but the volume has been there for Smith of late, and production will come. He only put up 40 yards on three grabs earlier this year against Washington, but it’s hard to ignore the juiciness of this matchup, even in a run-heavy attack. The Football Team has allowed the third-most fantasy points per game to wideouts this year, the fifth-most over the last four weeks, and they rank 27th and 22nd in DVOA against the pass and the opposition’s WR1 respectively. Ownership on Smith shouldn’t be too high either, which is nice for GPPs if you’re going to stack him with Hurts, and maybe Goedert if you’re feeling frisky or are an Eagles fan.

Jakobi Meyers, NE - To be clear, Damien Harris is my favorite play in the game, but he can’t run it every play. Right … Right? Mac Jones will throw it a couple times, and Meyers should have no issue against Rudy Ford in the slot. The Jaguars are a dumpster fire, and they have allowed the 10th most fantasy points to wideouts this season.

Michael Pittman Jr., IND - I actually really like the matchup for Pittman, and his eight grabs on 12 targets for 82 yards was his best stat line since Week 8 against Tennessee. Carson Wentz is on the COVID-19 list, and if Wentz is out, I’m not paying for Pittman with Sam Ehlinger under center. Keep an eye on Wentz’s availability, as it sounds like he still has a chance to play under the new protocol.