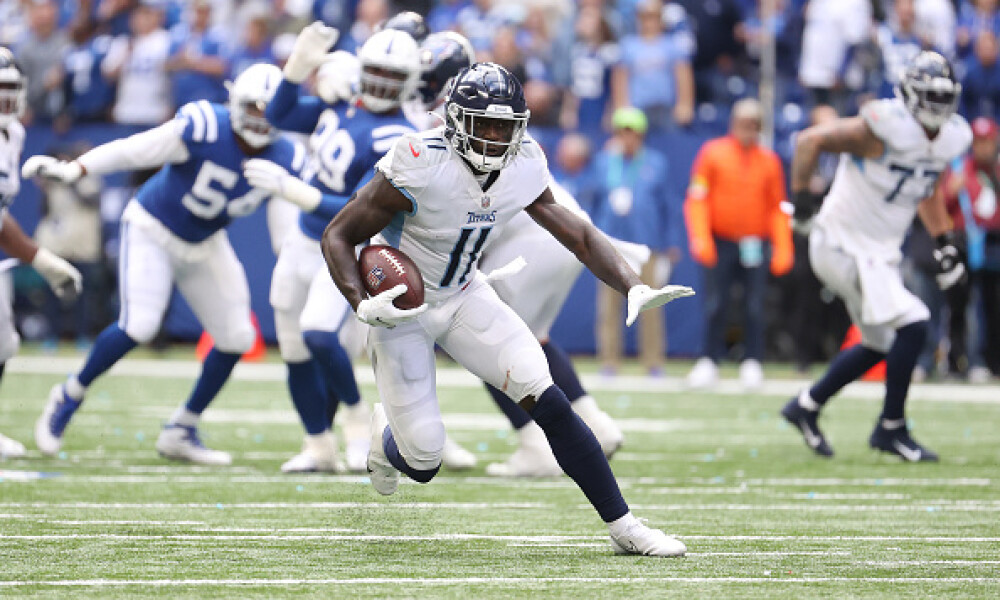 AJ Brown, TEN - Here’s what you need to know regarding Brown this week against Houston. He demolishes this Houston secondary. In four career games against Houston, Brown is averaging 6.8 grabs for 111.8 yards and 1.3 touchdowns per game. He’s found the end zone in every game against Houston, and three of the four contests have resulted in 100+ receiving yards. In a PPR setup, here are his fantasy outputs against Houston: 25.4, 22.4, 22.8 and 31.1.

Tyreek Hill, KC - Hill is a target hog, accruing a league-leading 48 targets over the last weeks. Yes, Dallas has Trevon Diggs, and as much publicity as he’s gotten for all of his interceptions, he also is quite exploitable. Hill has immense upside in any matchup, but one could argue he’s had one of the highest floors this season, as he has double-digit targets in all but three games, and has at least 10 targets in six of his last seven. Don’t be afraid of this Dallas defense, as they can be thrown on.

Ja’Marr Chase, CIN - It hasn’t been the most electric past couple of weeks for Chase, but he’s been far from disappointing we. Since going for 201 yards against the Ravens, he put up 32 yards and a score against the Jets, and before the team’s bye, saw 13 targets against the Browns. He is Cincinnati’s number one receiver, and we just saw Tyreek Hill go for 83 yards and two scores against this Raiders defense. His price has dropped a couple hundred bucks on DraftKings compared to recent weeks, and his ability to find the end zone firmly places him in on the DFS radar this week.

CeeDee Lamb, DAL - The Chiefs can score points, we all know that. Dallas will need to score, and they are certainly capable of doing so as well. The star wideout is averaging nearly nine targets per game over his last four contests, not to mention 94.5 yards and one touchdown per contest. He has flashed the biggest upside amongst Dallas’ big three receivers, yet also the highest floor. He’s going to be pretty chalky this week to say the least. UPDATE (11/19): Amari Cooper is OUT, meaning a few extra targets should come Lamb’s way. Michael Gallup becomes a chalky value WR.

Jaylen Waddle, MIA - The Jets have allowed six total scores to receivers over the last four weeks, not to mention a whopping 884 receiving yards in that span. The next closest team (New Orleans) has allowed just 730 yards to receivers, meaning that the next closest team to the Jets has allowed over 150 yards less to the position! Things have been better for Waddle when Tua Tagovailoa has been under center for the Dolphins, and overall, things have been much better for everyone when going up against the Jets’ defense. Over the last four weeks, Kendrick Bourne, Nelson Agholor, Tyler Boyd, Tee Higgins, Ja’Marr Chase, Michael Pittman Jr., Stefon Diggs and Gabriel Davis all went for double-digit fantasy points in a PPR setup against New York. Waddle will be the next to do so.

DeVonta Smith, PHI - Smith may only have six targets in each of the team’s last two games, but he has been incredibly efficient. Over the last two weeks, he’s caught nine balls for 182 yards and not one, not two, but three touchdowns. Over the last four weeks, the Saints have allowed the eighth-most fantasy points per game to receivers, and Smith should see a good bit of Marshon Lattimore, but don’t let that scare you. During this four week stretch, Lattimore has allowed the most receiving yards in coverage, not to mention the most receiving scores and second-most yards after the catch, per Pro Football Focus.

Hunter Renfrow, LV - Can you believe that over the team’s last three games, Renfrow leads the Raiders in targets, receptions, receiving yards, receiving touchdowns (T-1st)? Crazy. The Bengals have allowed the 11th-most fantasy points per game to opposing receivers this season and rank 21st in DVOA against the pass. Renfrow will never be the flashy play, but the guy has put up 17+ points on DraftKings the past two contests, and his price tag is still under $6,000.

Darnell Mooney, CHI - Over Chicago’s last three games, Mooney has a 23 percent target share and has amassed an impressive 326 air yards (16.3 air yards per target) during that span. A rushing touchdown helped boost his Week 9 numbers, but he continues to be the most dynamic receiving option the Chicago offense has at its disposal. The Ravens have allowed the fifth-most fantasy points per game to wideouts over the last four weeks and rank 24th in DVOA against the pass this season. UPDATE (11/19): Allen Robinson is doubtful for this game, meaning Mooney will have less competition for targets. Stock UP!

Laviska Shenault, JAX - Shenault saw eight targets last week, which was his third-highest mark of the season. Now, he turned those eight targets into a measly 15 yards on three catches, but he could have more success with a similar workload in this matchup. San Francisco’s Josh Norman has allowed the third-most receiving yards over the last four weeks, per Pro Football Focus, and Shenault’s downfield presence could come up big in this matchup. He cannot be trusted in cash games, but I’m fine with tossing him in a GPP, especially if you’re loading the San Francisco offense against this porous Jacksonville defense.

Tre’Quan Smith, NO - The Eagles are 18th in DVOA against the pass this season, and while Smith’s upside is capped by the New Orleans passing attack, he did have seven targets last week, resulting in four grabs, 44 yards, one touchdown and nearly 15 fantasy points (PPR). Smith just might be that cheap receiver you can slip in your cash game lineups to afford another big stud, seeing as he is just $4,400 on DraftKings (8.8% of budget).

Michael Pittman Jr, IND - I just said last week that not playing Pittman Jr. at this point was insane. Well, that isn’t the case this week. Buffalo has been the best team against the pass this season, per DVOA rankings, and they are the fourth-best against the opposition’s top receiver. He’ll see plenty of Tre’Davious White in this matchup, and even with game script being in Pittman’s favor, paying his price tag is going to be a tough sell in this matchup.