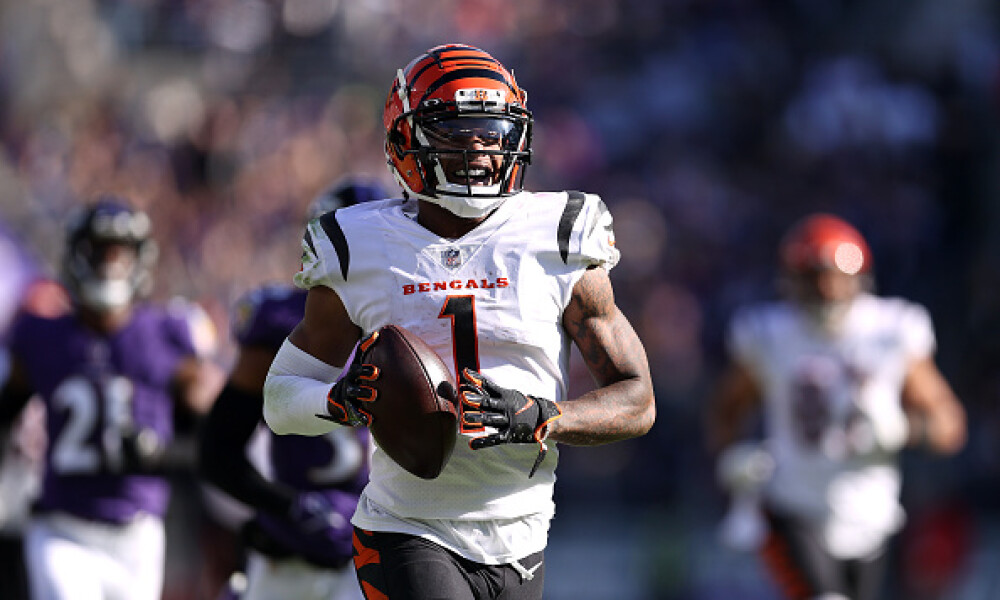 Ja’Marr Chase, CIN - It’s a Ja’Marr Chase week. I don’t care if Denzel Ward is on the field or not. Over the last four weeks, the Browns have allowed six touchdowns to opposing receivers, not to mention the fifth-most fantasy points per game. Furthermore, they rank 25th in DVOA against the pass and 29th against the opposition’s WR1. Chase has scored a touchdown in all but two games this year, and he’s averaging just under nine targets per game over his last five contests.

Tyreek Hill, KC - Hill is the Kansas City offense at this point. Sure, he hasn’t topped 100 yards since Week 4, but he’s averaging 13 targets per game over the last four weeks, and he has a nose for the end zone. He still has slate-breaking upside, but no one will argue with this reliable volume he’s received as well. This will be a full four quarters of potential production for Hill, and he just might go bananas against an underwhelming Green Bay secondary.

Jaylen Waddle, MIA - You want a wide receiver against Houston, and this week, Waddle is the play. Do I like DeVante Parker, too? Absolutely. However, I fancy Waddle a bit more. The Texans have allowed the seventh-most fantasy points per game to receivers over the last four weeks, and Waddle has 37 targets over the last four weeks! Houston ranks 28th in DVOA against the opposition’s WR2, and a secondary of Terrance Mitchell, Vernon Hargreaves and maybe Desmond King shouldn’t scare you away this week.

Christian Kirk, ARI - An Arizona receiver not named DeAndre Hopkins? That’s right. Hopkins has the touchdowns of late, but Kirk has the targets. Over the last four weeks, Kirk has at least five targets in each game, and he’s put up double-digit fantasy points in two of his last three. Yes, it’s not a great matchup, but as long as Kyler is playing, I’ll take a shot on Kirk in some GPPs.

Tee Higgins, CIN - Wait, Colby, are you telling me you can start Joe Burrow, Ja’Marr Chase, AND Tee Higgins in a lineup this week? Absolutely. Since returning from injury, Higgins is averaging 8.5 targets per game, and I have a hunch we’d be talking about him more in this matchup if he would have scored in any of the past four contests. The Browns rank 25th in DVOA versus the pass, and Cincinnati will have a far more lucrative Sunday through the air than on the ground. This Cincinnati offense can be so damn fun.

Hunter Renfrow, LV - Renfrow was my preferred Raiders wideout this week, even prior to the news that broke on Tuesday surrounding Henry Ruggs. Playing inside, Renfrow shouldn’t see much of James Bradberry, and the Giants have allowed the eighth-most fantasy points per game to receivers over the last four weeks. Not only does Renfrow have at least eight targets in three of his last four games, but New York slot man Darnay Holmes is Pro Football Focus’ 91st ranked corner (out of 116).

Tajae Sharpe, ATL - Russell Gage stunk last week, and New Orleans can be beat in the slot, so I do like Gage this week, don’t get me wrong. However, sometimes you have to zig when others zag, and that’s what we’ll do here with Sharpe. Sharpe set season-highs in targets (6), receptions (5), and yards (58) last week, and he shouldn’t see too much of Marshon Lattimore in this matchup. I fancy Gage in cash games, but I don’t mind Sharpe otherwise.

DeVonta Smith, PHI - Even though the price point isn’t steep, I can’t play Smith this week. He hasn’t scored since Week 1 and the Chargers have a decent secondary. Smith is averaging just over five targets per game over the last three weeks, and Jalen Hurts has been better for fantasy than reality. The Chargers rank fourth in DVOA against the pass and ninth against the opposition’s WR1. Yeah, I’d be looking elsewhere this week at receiver.