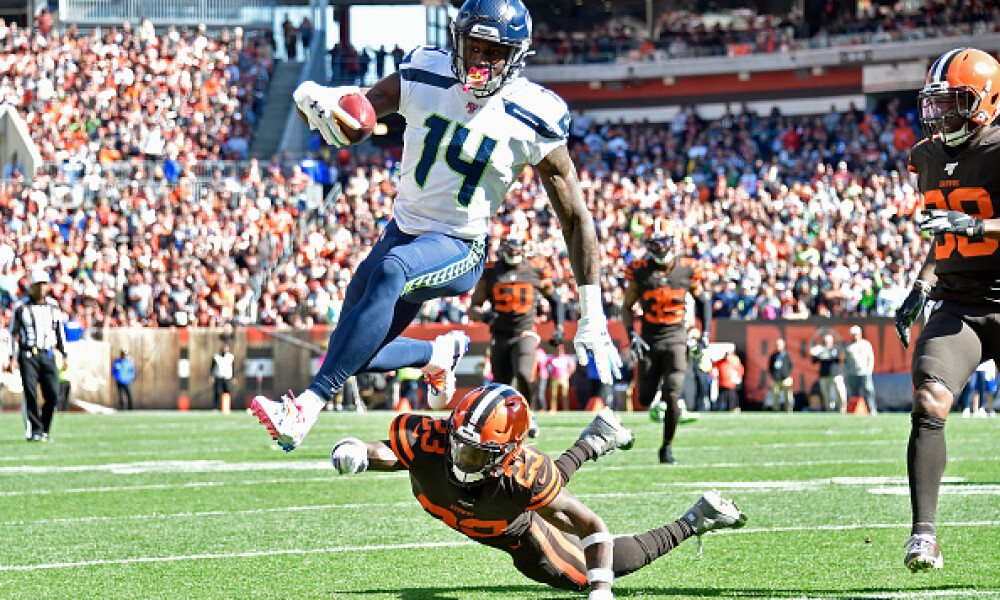 DK Metcalf, SEA - In terms of DVOA, Minnesota is the friendliest defenses to the opposition’s left wide receiver. That is Metcalf for Seattle, and while the freakishly gifted receiver has played second fiddle to Tyler Lockett, this matchup screams breakout for Metcalf. The Vikings have allowed the third-most fantasy points per game to opposing receivers this season, and in two career games against the Vikings, he’s averaged six grabs for 84 yards and one touchdown. Tyler Lockett is a fine play, too, but my money is on Metcalf in Week 3.

A.J. Brown, TEN - While Brown’s performance last week was suboptimal, I lean towards Brown over Jones in Week 3 due to Brown having a higher likelihood of going inside to square off against Kenny Moore. You’ll read more about Moore later, but he’s been horrible this year and one of the best corners to target for fantasy production. The targets are still there for Brown, and they will continue to be, so trust in his talent and rapport with Ryan Tannehill against one of the more generous defenses to opposing wide outs this season.

Keenan Allen, LAC - I’m surprised Allen isn’t more expensive. Over his past three games against the Chiefs, he’s caught at least seven passes for 71 yards with double-digit targets in each of those games. In what figures to be a higher scoring game, Allen should see plenty of work. Mike Williams has emerged this year, like we’ve talked about before, but against the Chiefs, the matchup inside should be more lucrative than outside.

ADDITION: Chris Godwin, TB - It seems like Antonio Brown has an uphill battle ahead of him to be able to pass COVID-19 protocols and play on Sunday. If that’s the case, there’s one less wideout for Godwin to compete with for Tom Brady’s attention. Mike Evans should see a good bit of Jalen Ramsey on the outside, leaving Chris Godwin with a far more friendly matchup. In last year’s matchup against the Rams, Godwin caught seven balls for 53 yards and a touchdown.

Courtland Sutton, DEN - Sutton actually leads the NFL in air yards with 309 through the first two weeks of the season! While the Jets haven’t exactly been incredibly generous to opposing receivers, Sutton has a great matchup against Brandin Echols, not to mention four inches of height on the New York corner. If the Jets can keep this reasonably close, the Broncos won’t hand it off for the entire fourth quarter, allowing Sutton to shine as the team’s WR1.

Emmanuel Sanders, BUF - Stefon Diggs is a great play, too, don’t get me wrong, but Emmanuel Sanders has a juicy matchup. William Jackson is Pro Football Focus’ 95th ranked corner out of 102 qualifying players. Ouch. Furthermore, in terms of air yards, Sanders is right on pace with Diggs, and is actually leading all Buffalo receivers with 16.2 air yards per target! The Football Team has allowed the seventh-most fantasy points per game to receivers, not to mention the fourth-most yards.

Rondale Moore, ARI - Here’s what you need to know and I’ll keep it short and sweet. The Jaguars are allowing over 15 yards per reception to wide receivers and they have allowed the ninth-most receiving yards to the position this season. They are inside the bottom 10 in terms of DVOA against passes more than 15 yards downfield and third-worst on short passes. Well, Moore can win in the short or long game, and his speed will give this porous defense fits. He’s a no-brainer addition to any Arizona stack this weekend, especially if DeAndre Hopkins were to be limited in any capacity. SUNDAY UPDATE: Hopkins is going to try to play, but could be deployed carefully by Arizona. Moore should get some extra snaps, which only boosts his value.

SUNDAY ADDITION: I really like JuJu Smith-Schuster in cash games, but if you want to swing for the fences in GPPs, take a look at Chase Claypool. The young wideout had two touchdowns against Cincinnati last season, and he’s far more explosive than Smith-Schuster. If Roethlisberger is going to throw it downfield, Claypool has best chance of monster fantasy day. Again, JuJu in cash and Claypool in GPPs.

Darnell Mooney, CHI - Mooney tied Allen Robinson with a team-best four targets from Justin Fields and the Cleveland defense has the second-worst DVOA, per Football Outsiders, against the pass through the first two weeks of the season. TyRod Taylor was throwing all over the Cleveland defense until he got injured, so why can’t Fields? The Cleveland defense has allowed nearly 14 yards per reception, and in terms of fantasy points allowed to receivers, they are only slightly better than Jacksonville (40.30 vs. 39.60).

Chester Rogers, TEN - If you want a super dart throw at wide receiver, here it is. Indianapolis is one of five teams to have allowed five receiving scores to wide receivers already in 2021, and Rogers’ primary opponent will be Kenny Moore. Why is that imperative? Moore has been horrible this season, allowing 12 of 13 targets to be caught and opposing quarterbacks have a 140.1 passer rating when targeting him! Rogers has a 15 percent target share on the year and at least five targets in each game. He’s my deep dive play of the week.

Quintez Cephus, DET - Cephus leads Detroit wide receivers in targets this season and he has an impressive 10.2 aDOT. The Lions play at a fast pace and have a bad defense, which will help pad some garbage time stats as that should be expected against Baltimore. Also, Baltimore has allowed the ninth-most fantasy points per game to wide receivers through the first two weeks of the season and it seems like half of its defense is out of commission for this contest. When Jared Goff isn’t throwing to T.J. Hockenson, it should be towards Mr. Cephus.

Henry Ruggs, LV - Derek Carr has been exceptional this year, but outside of Week 2, Ruggs wasn’t benefitting from it. Ruggs will see a good bit of Xavien Howard in this one, and that is not lucrative to fantasy production. Sure, Ruggs only needs one big play to make fantasy goodness happen, but Howard hsa allowed a measly 76.3 passer rating when targeted, per PFF.