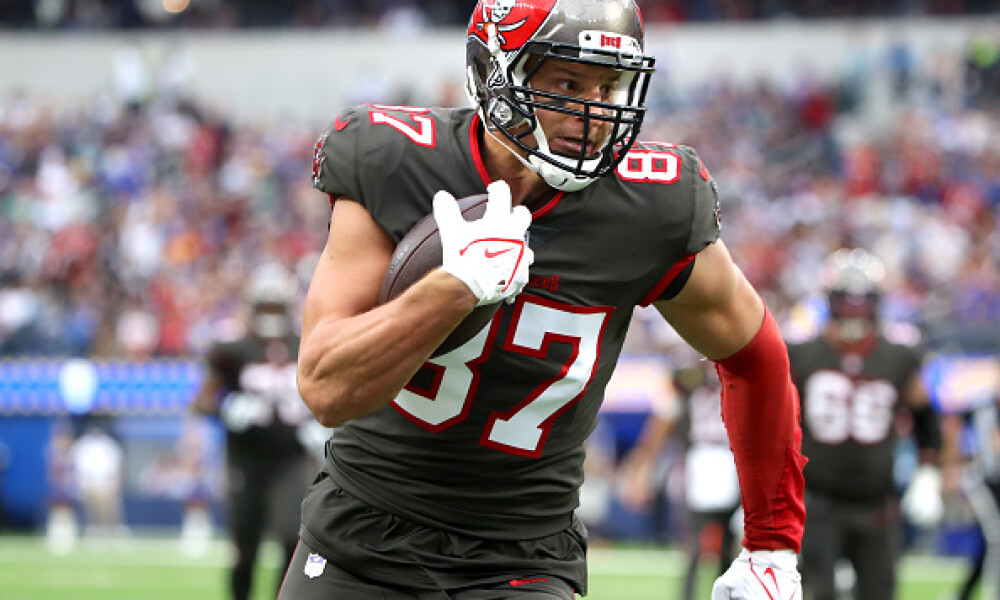 I’m not sure about you, but I was a football fan before I was a fantasy gamer. So a part of me truly loves the NFL playoffs even if that means seasonal fantasy is over – even if my main focus these days is on succeeding in fantasy.

But guess what? We can still actually get the best of BOTH WORLDS. That’s right! There are a number of different DFS slates where we can both root for our favorite team (or adopted playoff team) AND make some money playing fantasy football. So let’s get to it!

NOTE: Usually we do “top tier”, “mid tier”, “low tier”, “fades” but with such limited slates we are going to give a high end and low end option for each slate and then guys we simply don’t like as the fades.

Only two games on Saturday so we’ll give you our favorite top option and a budget option.  The top option is pretty obvious. Over the last two years, there have only been five tight ends that recorded games of more than 15 targets.  One was Mark Andrews with 16. One was Logan Thomas with 16.  The other three were all Waller with 16, 17, and 19. The nature of that alone means he has upside that no one can match on this slate.  At right around 11% of your budget, he’s fairly priced on both Yahoo and DraftKings so pick your poison.

There aren’t many cheap options so you basically need to pick between Henry and Knox.  What’s likely to happen is that folks will pick Knox because he scored last time they played without remembering how rough a time he has actually had against the Pats. In their first matchup he went two for 14 and in the second one he didn’t record a catch until the fourth quarter and he scored the TD on some lame shovel pass from the one yard like with only two minutes left.  It’s not a great matchup for Henry either but at least Henry has less target competition and lines up at WR for a good chunk of snaps.

I mean, we pretty much just said everything we needed to above in regards to why we are fading Knox here.

There are going to be a LOT of people on Travis Kelce and rightfully so because he’s awesome. And on Yahoo you might actually want to use him because he’s cheaper than Gronk for once.  But on DraftKings Gronk is the better option as Pittsburgh isn’t actually a great matchup for tight ends and Philly is arguably the worst defense in the league vs. tight ends and is easily bottom two. Tom Brady is not going to be messing around this week and, without Chris Godwin or Antonio Brown, Gronk ends up having a pretty safe floor.  You should have at least one Gronk lineup out there.

This might seem crazy but you aren’t going to get a better discount this week than Brate at $2,800 on DK and $13 on Yahoo. On the season Gronk has 24 red zone targets and nine end zone ones while Brate actually has 22 red zone targets and eight in the end zone. And the most interesting part is that three of Brate’s four touchdowns actually came in games with Gronk playing. AB and Godwin being out trickles all the way down past Mike Evans and Gronk so making a couple Brate lineups is a good way to hedge your Gronk bets.

This one really just boils down to pricing.  Schultz is a “safe” play but, with the number of different options that offense has, he really doesn’t have the kind of upside of someone who could get double-digit targets.  He also doesn’t have a great matchup so I’d rather go with the options we presented and, if not, I’d much rather pay down to Goedert or pay up to Kittle.  Schultz isn’t a terrible play - he’s just kind of in no man’s land and you could spend that $5,000 better elsewhere,

Even with Kelce for the two-game Sunday/Monday night game slate, we like this play better.  And for just the Monday slate, the reality is that there IS only one option.  We don’t like Tyler Higbee as is but this week he gets the double whammy of facing Isaiah Simmons and the number one tight end defense.  We talk about guys who are capable of double-digit target games and Zach Ertz is a guy who has had double-digit targets in three of the last four weeks (and in the fourth week he had nine so right there).  Ertz is a locked in part of this offense and about as safe as it gets in DFS right now.