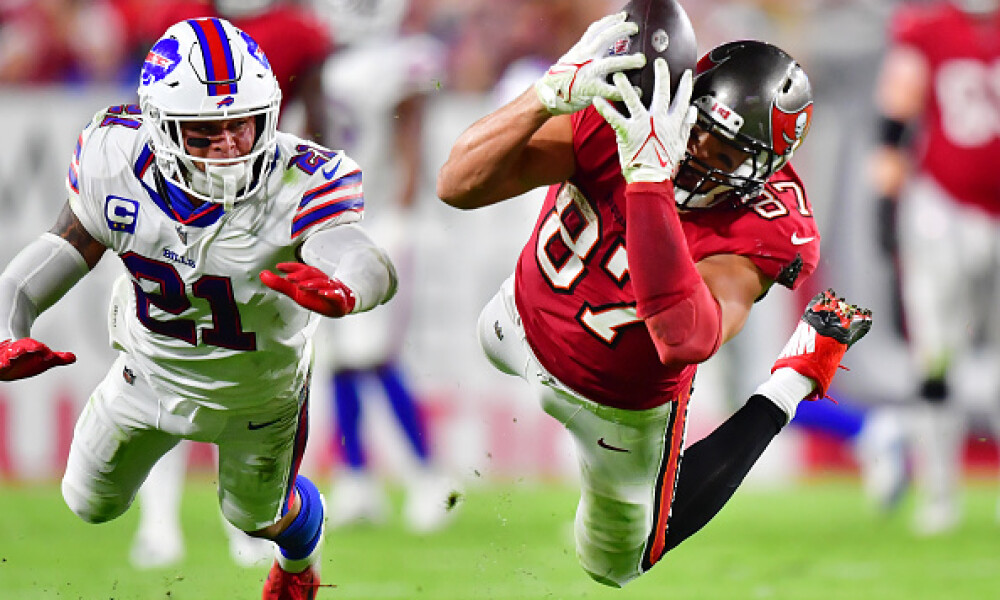 Finally season long fantasy football is out of the way so we can focus on what is TRULY important - winning money in DFS.  This might be the biggest DFS week of the year (and also the last one with a full slate).  So let’s not squander it!

Mark Andrews -  There aren’t too many options at this level.  Travis Kelce is on the saturday slate, Darren Waller is out, and Kyle Pitts is banged up.  That leaves these two guys we’ve picked and George Kittle.  Kittle has been rough as of late, he’s playing with the backup QB, and he’s got a pretty tough matchup with the Rams so, if we are going elite, we are paying up for Mark Andrews.  Andrews is the most expensive but, if head to head or cash game scenarios, he provides the safest combination of floor and upside of anyone out there.  The Ravens HAVE to win this week to keep their playoff hopes alive so they won’t be holding anything back.  At $7,500 on DraftKings and $30 on Yahoo he’s literally exactly evenly priced at 15% of your budget so you can go either way.  It's also worth mentioning that he could set the single season record for a tight end with a 141 yard game this week.  141 yards would be nice.

These are all written into his contract.  Tom Brady has a bunch of his own incentives (more on that in tomorrow’s article).  And these guys are going to at least attempt to hit some of those marks.  You don’t want to be standing on the sideline missing a game with 7+ catches for 85+ yards for Gronk so you have to at least get him there SOMEWHERE.  He’s 12.6% on DraftKings and 10.5% on Yahoo so Yahoo is the place to go.

Dawson Knox  - A lot of people will be off Knox because of the goose egg last week.  But that’s quietly been who Knox is all season.  He is highly matchup and touchdown dependent.  He still plays a massive snap share every game but sometimes he’s asked to hang in and block like he was vs. the Panthers, Patriots, and Falcons at times.  But this week he gets the Jets who are a bottom five defense vs. the tight end and it’s a game the Bills need to win to stay atop the division.  Knox is still tied for fourth in the league in red zone targets with 24 and third in end zone targets with 10 despite missing multiple games.  This is a good chance to take advantage of what should be low ownership.  He’s fairly similarly priced on both DraftKings and Yahoo so you can utilize him on either site.

Pat Freiermuth - In this price range Zach Ertz is another good option at home against Seattle so, if you are someone that likes to make a lot of lineups and diversify, mix an Ertz lineup in.  But Ertz honestly isn’t THAT much better of a start than Muth yet he’s $700 more expensive on DK.  You can do a lot with $700.  The Steelers have the same must win implications that we talked about for Mark Andrews but Muth has the benefit of the Ravens being one of the league’s worst defense’s vs. tight end.  So he’s a pretty good shot to contribute this week.  Like a few of these guys, he is priced right around 9.5% of your budget on both platforms so you can use him on either platform.

Hayden Hurst -  *EDIT - Kyle Pitts is active so pivot to Bates in this range* This one is entirely dependent on Kyle Pitts being out but at this point that seems like a decent chance.  If Pitts does play, all bets are off and we’ll try to circle back with another option.  But this week we got a glimpse of no Pitts or Hurst and it wasn’t pretty - Parker Hess an Lee Smith both played but neither has any pass catching prowess.  That tells us that the door is wide open for Hurst to take over the primary pass catching role and he just got activated off of the COVID list.  He’s only $3,200 on DraftKings (6.4%) but he’s the literal bare minimum on Yahoo at $10 (5%) so that’s where I’d make those lineups.

John Bates - It’s interesting to me that these DFS sites always seem to rely more on historical stats and matchup data rather than the narrative we see right before our eyes.  That’s what leads to these pricing discrepancies we can take advantage of.  The price for John Bates this week at $3,000 on DK and $10 on Yahoo is what you might expect if he and Ricky Seals-Jones were splitting snaps.  But Ricky-Seals Jones was carted off this week with a neck injury and hasn’t practiced all week making him unlikely to play.  When that happens we’ve seen Bates play practically 100% of the snaps making him an value proposition at his bare bottom pricing.

CJ Uzomah - The Bengals already announced that they are resting Joe Burrow this week meaning that any number of the starters could also be in for very short days.  I would not be surprised to see them go out and try to get Ja’Marr Chase the record and then pull everyone out.  For a guy who is already hit or miss, half a day is about the worst possible situation.

Mike Gesicki - This right up really does not need to be super lengthy. The New England Patriots are the number one team in the league vs. the tight end.  And situations like that random shovel pass at the very end of the game for Dawson Knox are the only times they are really getting beat.  They held Gesicki to literally zero catches the first time these teams met.  It’s just not a spot I want to go.