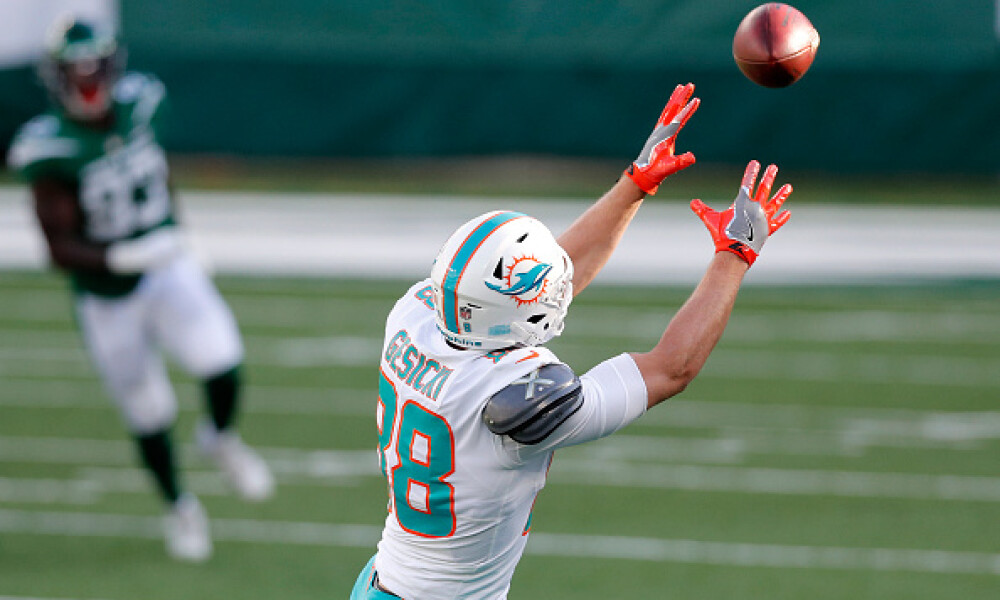 Travis Kelce -  In the top tier we are back to two of the premier options - mostly because we don’t love the matchups for some of the others.  Kyle Pitts faces New Orleans (top 3 defense vs. TE), Andrews gets Eric Kendricks and Minnesota (5th best), and George Kittle faces Arizona (more on that below).  If you are going to spend up on tight end, you might as well just go with the best in the business in a matchup where he and Patrick Mahomes should be eager to prove they are still huge contenders in this leagues.  Even during the down games, Kelce is pretty good.  Kelce is fairly evenly priced on both DraftKings and Yahoo so pick your poison in terms of platform.

Darren Waller - As we said, we don’t love the other options at the elite level so you might as well go BIG if you are going big.  Waller is about as safe as it gets - he’s had at least five targets in every game and at least seven in all but one. The Giants are not a good defense and are fairly susceptible to the tight end so the matchup is nothing to worry about.  We’ve seen the Raiders lean on Waller before with the monster target games (including a 19 target game week one) and, given the recent news with Henry Ruggs, the Raiders are going to need somebody to lean on.  At 12.5% of your budget on DraftKings and only 11.5% on Yahoo, Yahoo is the place to build a lineup around him.

Mike Gesicki - This is a great spot for Mike Gesicki for two aspects.  The first is that there will be people off him, thinking they understand the situation.  DeVante Parker came back and Jaylen Waddle and Parker got double digit targets while Gesicki only got four.  But people don’t realize that Gesicki had one of the more difficult tight end matchups facing Matt Milano, Micah Hyde, and even Tre’davious White for a huge chunk of the day.  In reality though he played virtually every snap and should remain a focal point of the offense.  Which brings me to my next point - this week he gets the Houston Texans defense which is arguably both the worst defense in the league and the worst vs. the tight end.  It’s a prime spot for Gesicki since his ownership should be low but his upside is high.  Gesicki takes up 9.8% of your budget on DraftKings and 11% on Yahoo so he’s a better DraftKings play if you are looking for a TE there. EDIT With the news that DeVante Parker has been moved to IR with a hamstring injury, this play just became a slam dunk.

Dallas Goedert - This pricing on both platforms is baffling to me.  Goedert was the fourth best tight end last week.  Now he goes against a defense that is bottom three vs. the tight end.  With Zach Ertz gone, he has a clear path to slot snaps and additional targets.  What are we missing here? Don’t be afraid to go back to the well on a player that worked last week and is actually CHEAPER this week.  On DraftKings he’s 9% of your budget and on Yahoo he’s 10% so this is another on that’s cheaper on DraftKings.

Evan Engram - When you get down into these value plays, you are just looking for someone who won’t get you a zero that has some sort of upside.  With the injury woes, Evan Engram always finds a way to get himself some targets as he hasn’t had less than four in a game yet this year.  On top of having two games with six targets and one with eight, this a guy that has 4.42 forty yard dash speed and is a threat to take one to the house any week if he can find space.  In fact, he has a 50+ yard play in each of the last three years which only Jonnu Smith has also done.  On top of all that, the Raiders are a bottom five team vs. the tight end.  You get a decent floor and a chance at ceiling.  Engram takes up slightly less of your budget on Yahoo but he’s a good deal on both.

Albert Okweugbunam - This one is contingent on Noah Fant not making it off the COVID list so we’ll give you another Bonus Dart Throw below to pivot to in case Fant can play.  But Albert O would be the bargain of the week if Fant is out.  It’s clear the Broncos love their athletic tight ends as, just like Fant, Albert O has a 99th percentile 40 yard dash (4.49) and speed score per PlayerProfiler.com.  They love running the two tight end sets with both of them and Albert actually had three targets to Fant’s four last week so he was involved even with Fant active.  This week they get Dallas who is in the bottom third of defenses vs. the tight end so he’s the cheapest upside option you are going to get. At $2,600 on DK and $10 on Yahoo, he’s pretty much the bare minimum price on either platform.

Texans Tight Ends - If you are on Yahoo, Jordan Akins ($2,700 on DK, $10 on Yahoo) is the same price as Albert O and, if you are playing on DraftKings, Brevin Jordan ($2,500 on DK, $12 on Yahoo) can be had for the money you spent.  There is a reason there is a split in the pricing - both are pass catching tight ends and it’s hard to say who will have the better game.  The Texans do love their multi-TE sets though and Pharaoh Brown is out so they should both play a decent amount.  If I’m on Yahoo, I’m going with Akins and on DraftKings, I’d role with Brevin Jordan.  In this land of crazy dart throws, you have to just give yourself a chance and let the dart fly.

George Kittle - This play right here is the absolute definition of an unnecessary risk.  First off, this guy is coming off a long term injury and has been limited in practice.  Who knows what his deployment will be.  Second, he’s going against the top defense vs. the tight end (ARI) and Isaiah Simmons who is a huge matchup issue.  On top of all that, he’s not even that cheap.  And hipsters will be gravitating towards him thinking others won’t start him.  Just avoid him this week, there will be plenty of weeks to use him.

Packers Tight Ends - Namely, Josiah Deguara but also Marcedes Lewis if people want to get crazy.  The simple thought process is that Robert Tonyan is out so someone will need to get that work.  That’s true that there will be snaps but the misconception is that it has to be a tight end.  Robert Tonyan himself played 50% of his snaps at wide receiver.  And Allen Lazard, over the last two years, has actually played 78 snaps in-line.  So the reality is that Lazard will probably take a bunch of those snaps and he’s not even TE eligible.  So don’t fall for that trap even if those tight ends are cheap.