Mike Klis on Twitter
All signs point to the Broncos' facilities opening to players later this month, but Lock, entering his first full year as the team's starter, has been proactive in gathering a handful of players for throwing sessions at a nearby park the past two weeks. Phillip Lindsay and K.J. Hamler were also spotted participating. There's obviously no guarantee this improves Jeudy's rapport with Lock out the gates, but it's a step in the right direction. Both rookies are expected to start in three-wide sets alongside Courtland Sutton.
Added Yesterday 2:20 pm (EST)
Added Yesterday 2:20 pm (EST) 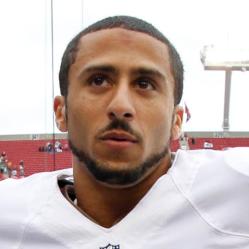 C. Kaepernick - QB
SF
The Washington Post's Mark Maske reports there are "increased hopes" that circumstances are more favorable for a team to sign free agent Colin Kaepernick.
The league likely won't hold a publicity stunt to try and have Kaepernick signed like last year, but some in and around the NFL believe the ongoing revolution will force owners to look in the mirror when sorting through available players. While his workout in front of scouts and personnel was labeled "average overall" by one scouting report, the 32-year-old free agent would inarguably slide in as one of the league's best backups upon signing off the streets. Note that he hasn't played a snap since 2016.
Added Yesterday 7:01 pm (EST)
Added Yesterday 7:01 pm (EST)

J. Jeudy - WR
DEN
9News' Mike Klis reports Broncos QB Drew Lock has been throwing daily to first-round WR Jerry Jeudy in Denver.
All signs point to the Broncos' facilities opening to players later this month, but Lock, entering his first full year as the team's starter, has been proactive in gathering a handful of players for throwing sessions at a nearby park the past two weeks. Phillip Lindsay and K.J. Hamler were also spotted participating. There's obviously no guarantee this improves Jeudy's rapport with Lock out the gates, but it's a step in the right direction. Both rookies are expected to start in three-wide sets alongside Courtland Sutton.
Added Yesterday 2:20 pm (EST)
Added Yesterday 2:20 pm (EST)

J. Runyan - OL
GB
Packers signed sixth-round rookie OL Jon Runyan to a four-year contract.
Son of Jon Runyan Sr., a 14-year pro who was once the highest-paid lineman in the NFL, the Wolverines' left tackle was groomed in the sport and inherited his father's trademark nastiness in bulldozing oncoming defenders in the run game. His versatility at both left and right tackle in college, as well as the few snaps he took in between at guard, should compensate for his subpar feet, length, and strength at the next level. Overall, Runyan (6'4/306) is an above-average athlete who projects best on the interior line but may be asked to compete at multiple positions with the Packers in camp.
Added Jun 05 1:53 pm (EST)
Added Jun 05 1:53 pm (EST)

K. Long - OG
CHI
New York Daily News' Manish Mehta reports the Jets have talked to RG Kyle Long, formerly of the Bears, about coming out of retirement.
It's the same approach GM Joe Douglas took last year in persuading Ryan Kalil to get off the couch and return to the field. Long, 31, battled through a lingering hip injury throughout his final season with the Bears before hanging up his cleats in January. He hasn't logged a full 16 games in any campaign over the last four years but has played well (three Pro Bowl berths at two positions) when available. It's currently unclear what the Jets would have to pay Long as an unrestricted free agent after Chicago declined his $9.6 million club option last year.
Added Jun 05 12:57 pm (EST)
Added Jun 05 12:57 pm (EST)

D. Jones - QB
NYG
The Athletic's Dan Duggan reports Giants QB Daniel Jones is training specifically to increase his ball security this season.
Jones' carelessness handling the ball at Duke (19 fumbles across 36 games) carried over into his rookie year off the bench as the 23-year-old recorded a league-high 18 fumbles across 12 starts. Duggan notes that Danny Dimes has since been training with an emphasis on ball security during the offseason, bulking to 230 pounds (up from 221) for a stronger grip, reaching out to Tony Romo (who infamously began his career with ball issues), and diligently working through drills that are designed for tight pocket movement. Jones flashed highs and lows, notably recording four games of 28-plus fantasy points against poor competition, in place of Eli Manning last year, but any concerted efforts into improving his own glaring weakness is a step in the right direction. Jones is a bet to bounce back as a fringe QB1 for fantasy assuming he survives the Giants' opening murderer's row against the Steelers, in Chicago, versus the Niners, and the team's cross-country bout against the Rams.
Added Jun 05 11:50 am (EST)
Added Jun 05 11:50 am (EST)

J. Fromm - QB
BUF
Bills OC Brian Daboll said QB Jake Fromm "has a lot of work to do to earn his teammates' trust."
"Jake [Fromm] spoke to the team yesterday," Daboll said. "He knows he has a lot of work to do to earn the trust of his teammates back. I believe actions speak louder than words and I believe he'll be committed to that." This all but confirms that the fifth-round rookie won't be cut after his racist text messages were leaked and posted to social media. He'll likely have a short leash off the field for the remainder of his career.
Added Jun 05 9:48 am (EST)
Added Jun 05 9:48 am (EST)

D. Freeman - RB
FA
Free agent RB Devonta Freeman said the Buccaneers can reach out "directly" to him if looking to negotiate a contract.
"A number of teams are interested, but we can’t negotiate through the media," Freeman stated on Twitter. "The Buccaneers can reach out to me directly." Coach Bruce Arians recently told media that Freeman is "asking for a lot of money," all but confirming the organization is still looking to add a veteran to their young backfield. With mutual interest on both sides, it would not be shocking to see the two come to an agreement over the summer. With Carlos Hyde already off the table to Seattle, LeSean McCoy and Lamar Miller would be the last remaining tenured dominos to fall once Freeman signs.
Added Jun 05 9:38 am (EST)
Added Jun 05 9:38 am (EST)

J. Stidham - QB
NE
Patriots QB Jarrett Stidham said he's been working out with Julian Edelman regularly in Massachusetts during the offseason.
Stidham, New England's fourth-round pick last year, only played 15 snaps as a rookie but is still expected to beat out veteran Brian Hoyer as the team's Week 1 starter. While a positive rapport with Edelman doesn't guarantee success under center, it's a step in the right direction following words of encouragement from C David Andrews, RB Rex Burkhead, and other teammates throughout the spring. The 23-year-old and Hoyer will compete to be named the team's starter during camp.
Added Jun 05 9:23 am (EST)
Added Jun 05 9:23 am (EST)