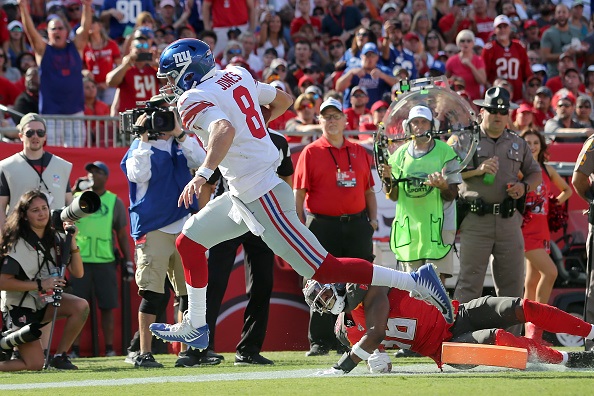 Daniel Jones – Some of the shine has certainly come off Danny Dimes (which is a stupid nickname, for the record), as he has had back to back subpar games. Some of that had to be expected against the Vikings, but he certainly should have had a better game against Washington. This will be his first short week, and to make matters worse they have to go to Foxboro. Trust the Dimes at your own peril. Belicheck is going to eat this kid for lunch. Look for more interceptions than touchdowns for the Giants rookie in this one.

Jonathan Hilliman – Saquon Barkley won’t quite be ready yet, and with Gallman’s concussion that leaves Hilliman as the starting back. Needless to say, no one will be picking the Giants to win this one. Hilliman is not someone to trust in any format, in any time period, in any way.

Golden Tate – He was unhappy after the game when asked if he thought his role would expand after having just three catches in his first game back from suspension. That’s the way to really acclimate yourself to your new teammates, complain after your first game! It is still tough to get a read on how the Giants will use Tate after facing a tough defense in the first game he played. However, it has to help his cause that Sterling Shepard will miss the game. It won’t get any easier as they now play on a short week and against another tough defense. You should really try to avoid using Tate if at all possible in this one with so much uncertainty still remaining.

Darius Slayton – If the Giants have a deep threat on the team, it is Slayton. He had four catches for 62 yards and a touchdown against the Vikings, and now has been successful in two of three games he has played in this season. It appears as though Slayton might be carving out a little role for himself in this passing game. With Shepard set to miss the game, Slayton could be a dart throw in DFS or an end of the roster guy when bye weeks and injuries really have you down. 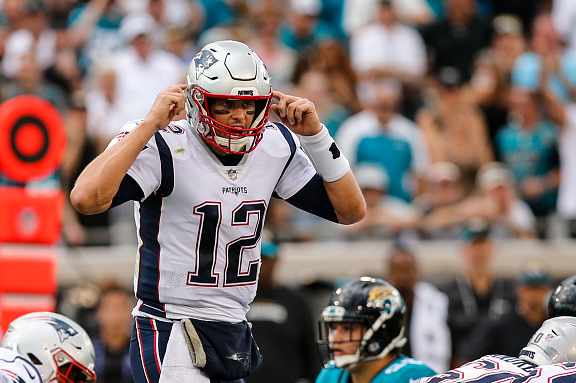 Tom Brady – Sure, it wasn’t much of a test against the terrible Redskins defense, but Brady just never stops producing. It should be another bloodbath on Thursday night as the Giants will offer little in the way of resistance against the Patriots offensive machine. Unless he gets pulled because they are winning by too many points, Brady should have another 300 yard game with three touchdowns.

Sony Michel – Maybe that performance will squash some of the folks considering straight dropping Sony Michel . He is still the lead back by a mile, there is value there. He had ten more carries than anyone else, and finished with 91 rushing yards and a touchdown. He even had three catches for another 32 yards. Don’t give up on Michel yet, this isn’t a sell-high window, this is him coming out of his doldrums. He should have another touchdown this week against the Giants, and he might even top 100 yards on the ground.

James White – James White just keeps doing James White things, which has some value in PPR leagues. He only ran for 26 yards, but his six catches for 46 yards gave you a 12 fantasy point day. His real value comes when he scores a touchdown, but those games are hard to predict. A game against the Giants is a pretty good bet, and if you have White on your roster in a PPR league, you can deploy him on Thursday.

Julian Edelman – This guy is a warrior as he not only goes out and plays with a chest injury, but he had a 100 yard game and scored a touchdown. The injury won’t be healed by Thursday, but there is little doubt that Edelman will play in this one. He should be peppered with targets by Brady again, and is an absolute must play in this one.

Josh Gordon – It wasn’t a highlight reel game for Gordon, but he still contributed five catches for 59 yards. It could have been more if he hadn’t been overthrown on a play where he had the defense beat. Gordon should have little trouble getting behind the lowly Giants defense, and is nearly a guarantee to have a touchdown in this one. Gordon should see more looks with Dorsett to miss the game and he absolutely should have a touchdown.

Jakobi Meyers - The injury to Phillip Dorsett opens up some playing time for Meyers. If you don't remember him, he was the guy who was torching opposing defenses in the preseason on a weekly basis. This is likely a short term rise in value, but it could prove to be productive as the Giants defense is among the worst in football. Meyers is a decent dart throw in fantasy games in Week 6, but he is still behind Edelman, Gordon, and James White in the pecking order for targets.

Summary: Even if the Giants were at full strength the Patriots would have killed them. Now with multiple skill players injured, the Patriots should have the spread covered by the end of the first quarter and never look back.

D. Williams - RB
KC
Chiefs RBs coach Deland McCullough expects a "big jump" from Damien Williams this season.
“Just listening to the way Damien spoke about himself and the things we’re doing and the things he’s going to do to improve, I think his maturation in this offense is going to be a big jump this year," was McCullough's full quote. All the focus has been on Clyde Edwards-Helaire since he came off the board on Night 1 of the draft, but it is very much up for debate if the diminutive LSU product is readymade for an early-down role in the NFL. CEH is a dynamite pass catcher, but Williams also excels in that area. Coach Andy Reid was comfortable with a committee in 2019. Especially in the context of the coronavirus-shortened offseason, it should not be surprising if Reid heads that direction again. CEH's ADP is a leap of faith.
Added 3:54 pm (EST)
Added 3:54 pm (EST)

J. Rohrwasser - K
NE
Patriots fifth-round K Justin Rohrwasser has had his "Three Percenters" militia tattoo removed.
The far-right group has been associated with racism. Rohrwasser claimed ignorance when it became a controversy following his draft selection, saying he merely thought it was a military tribute. That, of course, strains belief. He vowed to have it removed and has followed through on doing so. "I’m going to learn from this," Rohrwasser claimed. We would certainly hope so. Rohrwasser's draft capital makes him the heavy favorite to replace Stephen Gostkowski in New England.
Added 3:41 pm (EST)
Added 3:41 pm (EST)

B. Hoyer - QB
NE
ESPN's Mike Reiss believes Brian Hoyer could be the odd man out of the Patriots' quarterback room.
In other words, the Patriots might not keep three quarterbacks. Hoyer's fate could depend on Cam Newton's health. 31-year-old Newton has suffered major shoulder and foot injuries over the past few seasons. On his last legs in the NFL, Hoyer will be a roster luxury the Pats probably can't afford if Newton looks ready to go this summer.
Added 3:35 pm (EST)
Added 3:35 pm (EST)