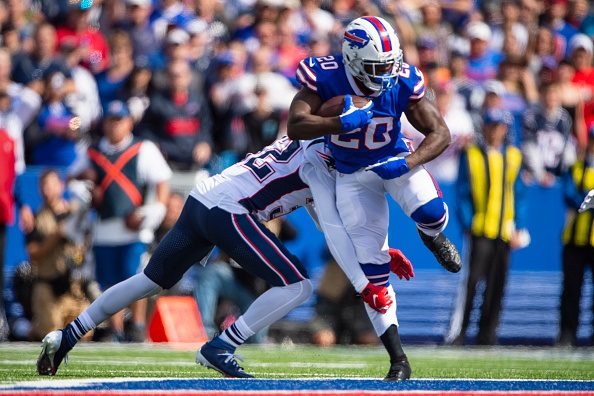 Josh Allen – Whew, it was an ugly one last week for Allen as he threw three interceptions and completed less than fifty percent of his passes. Allen did run one in to kind of salvage his fantasy day, but this was his worst game of the year by far. He also was unable to finish the game, and is in the league’s concussion protocol.  Even if he is able to play, you should certainly look in another direction this week.
Frank Gore – Like a cockroach in a nuclear blast, Gore just won’t die. Even against a fairly solid Patriots defense, Gore still racked up 109 yards on 17 carries. It was his first 100 yard game of the season, and as long as Devin Singletary is out, Gore is a lock for over 15 carries. This isn’t the best matchup for Gore, as the Titans are allowing about 100 rushing yards a game on the ground. Devin Singletary may return, but even if he does Gore certainly still has flex consideration.
John Brown – He continues to be a pretty consistent performer from week to week, although he needs to start scoring more touchdowns to help his fantasy value. Of course, that is tough when your quarterback is only completing about fifty percent of his passes. He was targeted 11 times in the game, so he is still is a major part of the passing game. He is going to have a really hard time this week against the Titans who have a fantastic secondary, and it will be even worse if Matt Barkley is under center.
Cole Beasley –He has been targeted 35 times in the four games, and in PPR leagues, Beasley is turning himself into a weekly WR4 or a flex play option. He has yet to score this season, but he has scored at least ten fantasy points in three straight games. It won’t be a dynamite matchup this week against the Titans, but he still can be put in your flex with some confidence.
Dawson Knox – The rookie had his second straight game with three catches, and this time it was for 58 yards. He didn’t score in the game, but he certainly is carving himself out a small niche in the offense. He might come in handy during the bye weeks, and in case your tight end gets injured. You don’t have to run to the waiver wire, but if you need any help at the position, he looks like a decent option to turn to. 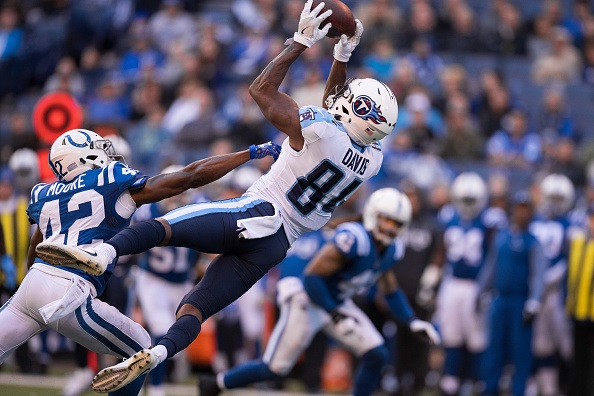 Marcus Mariota – Is this actually two straight pretty good games for Mariota? A week after throwing for 300 yards on Thursday Night Football, Mariota threw three touchdowns against the Falcons. However, that was against the Falcons secondary who isn’t very good and was banged up, and this week they play the Bills who are rock solid. Don’t fall into the trap, Mariota isn’t very good and he will throw for 150 yards and two interceptions in this one.
Derrick Henry – Last week was the first time this season that Henry didn’t have a touchdown, but it was his first 100 rushing yard game of the year. It also was his most carries with 27. He will have a hard time replicating that against a staunch Bills defense in Week 5. However, Henry is a strong, physical runner and if someone is going to have success against the Bills it might be Henry. He isn’t a strong play, but he shouldn’t be shut down completely.
Corey Davis – The stars all aligned in Week 4 for Davis to have a great game against the Falcons, and that is what he did with five catches for 91 yards and a score. This week is not the same kind of situation for Davis, as he will face a much tougher defense. It will be the equivalent of fighting a five year old child one week, and then fighting Mike Tyson the next. The sell window has opened, trade Davis if you can, but if you can’t put him firmly on your bench.
A.J. Brown – Good luck figuring out when this guy is going to blow up. Brown had 100 yards in the first week, 29 yards on four catches the next two weeks and in Week 4 he had two touchdowns on three catches for 94 yards. The Titans offense stinks out loud most weeks, and expecting him to succeed against the Bills is a fool’s hope.
Delanie Walker – It almost seems like when the Titans offense is clicking that Walker isn’t a big part of it, and when the Titans can’t seem to score points Walker is the only viable fantasy option. Despite only being targeted twice in last week’s game, Walker should be much more involved in Week 5. The Bills secondary should be all over their average receivers and that could leave Walker open for five catches for 65 yards in this game.
Summary: The Bills are likely to be without Josh Allen in this game, which completely negates their chances of winning. The Titans defense has been very good, and outside of John Brown there isn’t another reliable receiver that they need to focus on. Especially when the quarterback isn’t really able to deliver the ball. Frank Gore will have to pull out a miracle in this one for Buffalo to win. The Titans won’t score many points either, but Derrick Henry will do just enough to get the Titans the game.

T. Lewis - WR
NO
Lewis signed a reserve/future contract with the Saints on Tuesday, Luke Johnson of The New Orleans Times-Picayune reports.