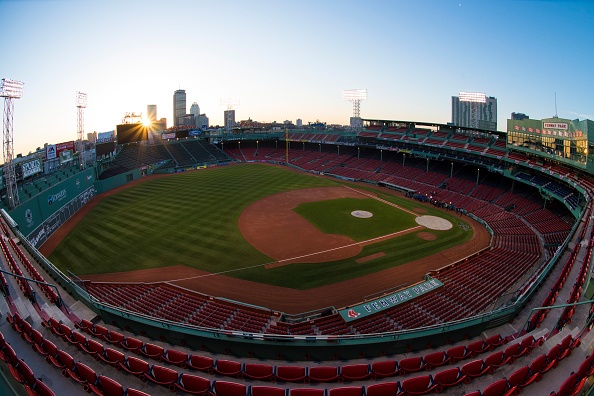 A neutral park projection is 100. Anything over that increases the occurrence of that stat in question and vice versa. For example a park factor of 100 for home runs means the venue increases home runs by 10 percent over a neutral park.

Park factors are presented as three-year averages as a means to account for sample size anomalies that isn't fleshed out over the course of a 162-game season. The calculation is designed to eliminate everything but the park itself though noise will always remain. Using a three-year average reduces the residual noise but there will always be an error bar. The best evidence for this is the domed stadiums don't display the same factor each year.

Every player isn't influenced equally via a park factor but big-picture, it's better to apply it in a universal manner than trying to guess how much it affects a player on an individual basis.

To get a better adjustment for hitters, the various factors are determined for left-handed hitters and right-handed hitters. Pitchers are adjusted via the overall park effect.

It may seem odd to compute factors for strikeouts and walks but they indeed exist and since they're both stats used in DFS scoring, it makes sense to adjust those as well. The reason for venues affecting whiffs and walks can be foul territory and atmospheric conditions such as pressure and humidity. The hitting eye in each venue differs as well.

What follows are the three-year averages for hitters and pitchers. These are the factors that are used in the Fantasy Alarm daily projections.

If you use the site's projections, all this is already incorporated. However, if you set your lineups by feel, and intuitively make alterations, you'll want to take a long look at some of the factors since there's likely a few are a bit surprising. The main disconnects are between parks whose HR and run factors are opposite, We tend to think of them in pairs, but especially when it comes to selecting pitcher, we're probably unduly penalizing some starters that are deserved of a start but end up on the sidelines in a perceived hitting park. The key is for pitchers, we don't really care if it's a home run park so long as run scoring is neutral or depressed. If you're using a hitter in a stand-alone scenario, the HR factor is most important. If you're stacking, it works best in a park positive for runs with HR a bonus.

Let's take a look at some of the curious venues.

HIGH HOMERS IN A PITCHERS PARK

CITI FIELD - Recent renovations have made the New York Mets home venue a positive HR park even though it's still plays like an extreme pitcher's park.

DODGER STADIUM - A few years back, they moved home plate relative to the fences and the effect was to increase homers but runs remain hard to come by.

YANKEE STADIUM: The Bronx ball yard is wonderful for homers but plays neutral for runs. This is one of the parks where intuition says not to start pitcher. The numbers say it's fine to use an arm in Yankee Stadium.

THE GREAT AMERICAN BALLPARK: The American Small Park is a misnomer in that run scoring is neutral.

CITIZENS BANK PARK: The home of the Philadelphia Phillies is similar to Yankee Stadium; it helps homers a lot but is neutral for runs.

TARGET FIELD: The perception is the Minnesota Twins home is a pitcher's park. While it suppresses homers, it's beneficial for runs.

KAUFFMAN STADIUM: The K may squash power but it plays positive for runs so your pitchers aren't as safe as you may intuit.

MARLINS PARK: Ditto for the Aquarium. It's really not called that bit it should be. If the team is nicknamed the Fish, they should play in the Aquarium. The points is Marlins Park kills power but runs are neutral.

FENWAY PARK: Some parks have hugely different HR factors for lefties and righties. The Fens croaks left-handed power while right-handed pop is neutral. The renovations above home plate reduced the wind currents towards The Monster. however, overall, Fenway Park is a great runs park since the Monster turns a bunch of outs into doubles and there's limited foul territory.

PROGRESSIVE PARK: Overall, the Cleveland Indians home depresses runs but a latent quirk is it's very good for left-handed power.

WRIGLEY FIELD: Very good for right-handed power, not so good for lefty swingers.

NOT WHAT THEY SEEM

?COMERICA PARK: The Detroit Tigers play in a pitcher's park, right? WRONG! Comerica is on a par with Fenway and Rogers Center in terms of run scoring.

TURNER FIELD: The perception is Turner Field is a pitchers park but it plays neutral.