CATEGORY IMPACT STEALS: Pitchers and catchers to run on 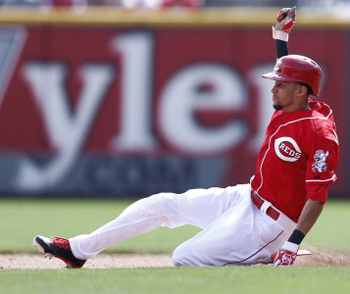 WIth so many traditional fantasy leagues playing with daily transactions, not to mention DFS, having a better idea when a player may rack up a steal or two can render a nice edge. As such, today's category impact will focus on stolen bases.

Instead of focusing on some players (and teams) that appear to be doing more running (hello, Desmond Jennings), we're going to attack the topic from the opposition point-of-view, categorizing pitchers and catchers in accordance to their susceptibility to allow base runners to snag an extra bag.

Data from the past five seasons was analayzed, using stolen base success rate as the measuring stick. It's widely accepted that a success rate of 75 percent is the break even point where the added potential of scoring a run with a successful steal balances the damage done by an unsuccessful attempt. The league average has been a few ticks below 75 percent.

While the assignment of categories was based on the numbers of the previous five seasons, some subjectivity was interjected when it seemed necessary. That is, there was no hard-and-fast cutoff delineating the categories. Similarly, when you actually decide what players to use to pick up a few steals, treat each case on an indivdual basis and look at all the factors. The end result is not a black-and-white matrix. You'll need to occasionally inject some subjectivity of your own.

The percentage of runners thrown out from 2010-2014 was determined for every catcher appearing the Majors so far this season. Here are the categorical breakdowns, keeping in mind the decision isn't whether to have Billy Hamilton active but rather to use a decent base stealer or even which one of a couple of options to employ for that matchup.

Now let's look at the pitchers. The same criteria was used to categorize every starting pitcher. Here's how to think about the groups.

Next week we'll take a look at some candidates to procure some pilfers using the above tables to help decide. If you have a question about a possible option before that, please feel free to post in the comments and I'll pop back and offer my opinion.