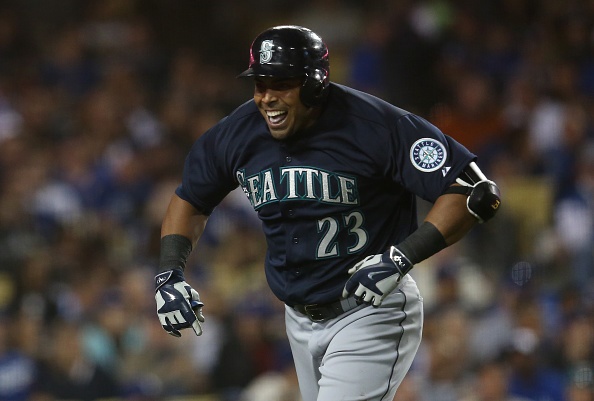 Let’s take a look at the top-15 home run hitters through Wednesday night’s games and decide if they’ll make more of a category impact than originally expected. It goes without saying each of them won’t continue their current pace – 3 homers through 10 games prorates to almost 50 on the season. The question to be answered is did we miss an indicator in our preseason analysis that may lead to the player exceeding initial power expectations or is he simply off to a hot start. This could present a buy-high opportunity. That is, if an owner in your league wants to capitalize on a fast start not realizing it’s more fact than fluke, you can take advantage.

Nelson Cruz, Seattle Mariners (6 HR in 9 G): Nothing has really changed. When healthy, Cruz is expected to hit home runs. Sure, a 30 percent HR/FB and 69 percent FB rate will come down, but he’s still a threat to go yard, even in Safeco Field. The question remains health. Many, yours truly front and center, discounted Cruz due to injury-risk. Upon further review, he played 159 games in 2012 and 159 games last season. In between, he played 109 but missed 50 due to his PED suspension. Doing the math, 109+50=159 – see a pattern forming? I’m still taking the under on 159 but I do admit to underestimating the number of games Cruz would play, pegging the number in the 130s. if his owner made the same apparent mistake and wants to sell high, see what it might take.

Adrian Gonzalez, Los Angeles Dodgers (5 HR in 9 G): Nothing to see here, Gonzalez is simply amidst a stretch where he’s buoyed by an unsustainable 33 percent HR/FB. There’s nothing to suggest he’ll finish with anything greater than the 25-30 dingers most anticipated.

Adam Jones, Baltimore Orioles (4 HR in 9 G): Much like Gonzalez, Jones is a veteran with a very established track record consisting of both production and durability. A goofy 44 percent HR/FB rate won’t last and by season’s end, Jones will again finish with 32 homers, plus or minus a couple.

Hanley Ramirez, Boston Red Sox (4 HR in 8 G): Ramirez profiles more like Cruz than the steady Gonzalez and Jones; it’s all about the health. Something to keep in mind is Fenway Park is worse on right-handed batters for home runs than Dodger Stadium. Still, a healthy Hanley should be able to put up a monster (pun intended) season. Ramirez is a play-to-win guy. If his owner is looking to sell high and you believe second place is first loser, go for it.

J.D. Martinez, Detroit Tigers (4 HR in 9 G): Generally, I don’t buy the he’s a new guy after working with the hitting coach argument. All we hear about are the successes, never the failures. Looks like I’m the one that failed, at least so far as Martinez is picking up where he left off. His power surge is more due to hitting an inordinate number of fly balls than a bloated HR/FB (though 27 percent is better than last year’s 20 percent mark). The number of fly balls will come down. What’s more apparent is last season’s doubling of his HR/FB mark is fact which should result in a near 30-HR season, more than the low twenties I originally expected.

Joey Votto, Cincinnati Reds (3 HR in 9 G): Now it gets fun. Is it health or a change in approach? The approach hasn’t changed; Votto is sporting the same 17 percent walk rate as usual. What’s odd is he’s hitting an extremely low 20 percent fly balls but a ridiculous half of them are leaving the yard. It appears we have the Votto circa 2013 with a mid-twenties home run expectation, assuming he can sustain good health. Of course, this will still frustrate the fantasy populace that yearn for 30-plus if he’s just swing more but at least we’re back to getting production when he does swing. Health is still a concern, but Votto looks like he should be treated as a third-rounder/$24 player.

Justin Upton, Atlanta Braves (3 HR in 10 G): Not that it was expected, but it’s nice to see that Upton isn't spooked by Petco Park as he has a pair of home bombs in the early going. If his owner is inexplicably looking to sell high, don’t ask questions. Well, other than “what do you want for Melvin’s little brother?”

Paul Goldschmidt, Arizona Diamondbacks (3 HR in 9 G): Comforting to see early-season power after Goldschmidt had his 2014 season truncated after being hit in the hand. The only change in expectation is if you were fearful of a slow start as those concerns should be assuaged.

Dustin Pedroia, Boston Red Sox (3 HR in 9 G): The narrative is Pedroia is a gamer and has been fighting through injuries the past couple of seasons and is finally healthy. This is all well and good but realize even at his peak, Pedroia topped 20 homers only once. It’s likely he escapes the single digits, but there’s no reason to believe Pedroia smacks anything more than mid to high teens out of the yard.

Nolan Arenado, Colorado Rockies (3 HR in 9 G): As suggested, the pace will wane, Arenado isn’t hitting 54. But threatening 30 is plausible. However, from a practical sense it doesn’t matter since there’s no way his owner will make him available.

Jed Lowrie, Houston Astros (3 HR in 8 G): Lowrie is a fly-ball hitter playing half his games in a park that is friendly for home runs. That’s good. His career HR/FB is a mere 6.7 percent. That’s not so good. This season’s 43 percent is an aberration (duh). But, if Lowrie repeats the 11 percent mark he sported in Minute Maid as an Astro in 2012, he’s got a shot at high teens. Lowrie’s always an injury risk, but if he’s your middle infielder and not your shortstop (making replacing him easier), he’s a great buy high candidate if you need some added pop.

Dustin Ackley, Seattle Mariners (3 HR in 7 G): This is a tricky one since there’s a couple of factors in play. Ackley is at a point in his career where a power spike wouldn’t be surprising, especially since last season he demonstrated growth with respect to both HR//FB and fly balls hit. The problem is, at least so far, he’s stuck in a platoon, albeit on the good side. Still, a platoon means fewer chances. Somewhat mitigating this is Ackley has hit leadoff on occasion when he does start. Platoon players of Ackley’s ilk aren’t useful in mixed leagues, unless it’s super deep, say 20 teams. However, in AL-only, buying high is a no-brainer.

Jonathan Schoop, Baltimore Orioles (3 HR in 8 G): I’d be a lot more intrigued if this power surge came hand-in-hand with better contact and/or patience, but alas, it does not. Schoop is still fanning too much and remains allergic to bases on balls. In fact, I’d be looking to sell high. If Everth Cabrera shows anything while J.J. Hardy is out, Schoop could be on the bench when the regular shortstop returns, pushing Cabrera to second.

NOTE: Pedro Alvarez, David Freese and Todd Frazier also have three homers thus far but there’s really nothing pithy to say. Alvarez has prolific power if he can actually hit the ball, Freese has pop but is a health risk and Frazier is still maturing in a park very conductive to power hitters.