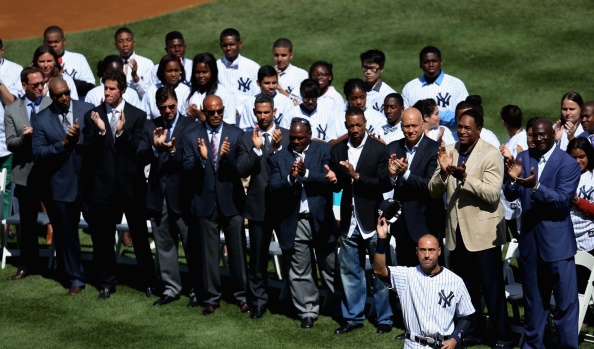 Football is here but let’s not forget about baseball. You’ve grinded out 23 weeks; keep working hard for the last three.

Carlos Carrasco’s stretch drive is reminiscent of what Danny Salazar did to close out the 2013 campaign for the Cleveland Indians, just something to think about come draft time next spring…yesterday he fell one out shy of a complete-game shutout, fanning eight with just four hits and no walks…Michael Brantley continued his push for early-round fantasy status with two more knocks with an RBI…Scott Carroll was sharp in the losing effort, tossing seven frames and limiting the Tribe to a pair of earned runs

Wade Davis The day began with a very classy ceremony for Derek Jeter day and ended with a Wade Davis save as the Kansas City Royals put a damper on the celebration of the Captain’s Yankees career…Yordano Ventura set the tone with six scoreless then arguably the best bullpen in the game kept it that way…the Royals were in a looting mood as Alex Gordon, Alcides Escobar and Omar Infante all had a steal…Jeter had an infield hit in the first, one of only four home team hits on the Captain’s day.

Christian Yelich The Miami Marlins kept their wild-card hopes alive with shutout of the Atlanta Braves…Brad Hand filled in admirably for Henderson Alvarez, working the first six scoreless with three whiffs…Christian Yelich was the only player on either team with more than one hit, he had a pair and his 17th steal…Jarrod Saltalamacchia plated two of the four Fish runs…Julio Teheran did not pitch poorly, he was just victimized by some hits with eyes, giving up eight in 5 1/3rd frames, fanning five with no walks…the emotional Teheran took his frustration out on an innocent bucket of bubble gum that was in no way responsible for his team’s recent offensive woes.

Zack Wheeler threw six strong, punching out six, walking two with five hits, allowing just one earned…Curtis Granderson was 2-for-3, featuring an 8th inning solo shot, two runs and two RBI…Anthony Recker stung his sixth of the season…Juan Lagares had three stolen bases…Skip Schumaker had a pair of hits and an RBI while Jay Bruce hit his 16th.

Gio Gonzalez outdueled Cole Hamels, tossing six solid stanzas, allowing two runs (one earned) while whiffing three with no walks…Adam LaRoche touched Hamels for a pair of solo-shots, giving him 23 on the season…Hamels fanned seven but wasn’t as sharp as usual, issuing three free passes in 6 1/3rd innings…Marlon Byrd had a pair of knocks for the only multiple-hit game on the losing side.

Jose Bautista ’s three-run blast in the 5th was all the Blue Jays needed…R.A. Dickey did the rest, baffling the Boston Red Sox for seven stanzas, scattering six hits, walk nobody while whiffing four…Adam Lind had three hits for the winners…Mookie Betts and Xander Bogaerts each had a pair of hits with Bogaerts securing the only RBI in the losing effort.

Adam Wainwright had it going on as he spun a complete game seven-hitter, allowing just a run while fanning three with one walk…Wainwright threw exactly 100 pitches, an impressive 71 for strikes…Jhonny Peralta put an exclamation point on the win with the games only home run, a two-run shot in the 9th…on the day, Peralta was a cool 3-for-5, scoring and plating a pair…Oscar Taveras followed up his home run Saturday with a three-hit game on Sunday…Matt Carpenter, Peter Bourjos and Kolten Wong all had a pair of hits with Wong also capturing his 20th steal…Carlos Gomez had a pinch-hit RBI single suggesting he could be safe to use in daily leagues this week.

Nelson Cruz accounted for all seven of the Baltimore Orioles ribbies, going 4-for-5 and sandwiching a pair of homers around a 9th-inning go ahead triple…Bud Norris started but allowed four homers to the Rays but was taken off the hook with Cruz’s heroics…Zach Britton blew the save allowing Adam Miller to vulture a save later…Evan Longoria, James Loney, David Dejesus and Kevin Kiermaier did the honors, all taking Norris deep…with Brad Boxberger and Jake McGee sitting this one out after having worked in three straight, Joel Peralta was the guy victimized by the Cruz triple.

Sometimes you earn wins, sometimes you’re the recipient of a bunch of run-support, C.J. Wilson owes his mates a big bottle of shampoo after they staked him to 12-3 lead after six…Wilson lasted 6 1/3rd, allowing three runs while whiffing six…Howie Kendrick led the attack with three hits including a triple and homer, two runs scored while knocking in four…Mike Trout and C.J. Cron also did yard work for the Halos…Kennys Vargas hit his 7th for the Twins.

The Pittsburgh Pirates clubbed 19 hit, led by Andrew McCutchen, Neil Walker and Gaby Sanchez with three each…Cutch, Jordy Mercer, Walker and Gerrit Cole all cleared the deck for the Bucs…Cole’s was in support of his own mound effort where he tossed six stanzas, fanning eight but allowing three earned runs (four total) on nine hits…Travis Wood was bombed for seven earned in only 1 2/3rd…the recently recalled Mike Olt was 3-for-3 in the losing effort.

Derek Holland had his second straight stellar outing since returning from the disabled list as he shut out the Seattle Mariners for seven stanzas, scattering six hits with five strikeouts, walking no one…Leonys Martin provided the offense with a 3-for-4 performance, stealing a base and scoring the game’s sole run…Austin Jackson and Robinson Cano had a pair of knocks each.

Dallas Keuchel kept the Houston Astros in the game, allowing his mates to win it late…he threw 6 2/3rd innings allowing two earned runs (three total) with eight hits, a walk and three whiffs…Tony Sipp was given the first same chance since the latest Chad Qualls meltdown versus the A’s but needed Josh Fields to come in and clean up his mess…Jason Hammel continued his turnaround with a 6 2/3rd inning effort, allowing two earned on five hits, fanning seven with just one bases on balls…Nate Freiman lined a homer in the losing effort.

Adrian Gonzalez belted a pair of three-run jobs, making it three homers over two games…Matt Kemp went-back-to-back with Gonzalez’s second…Zack Greinke did what he had to do for six innings, surrendering a pair of runs on six hits and three walks, whiffing four…Trevor Cahill three five no-hit innings before he was jinxed, falling apart in the sixth…Cody Ross had three knocks for the losers.

Franklin Morales and three relievers shut out the San Diego Padres for the second time in the three game set in Coors, so much for that daily stack…Morales threw six scoreless, fanning six, walking two while scattering four hits…rookie receiver Jackson Williams opened the scoring with his first career home run, a three-run shot in the 2nd…Nolan Arenado added some insurance with his 17th…Charlie Blackmon snagged his 26th bag.

Kyle Lobstein wasn’t as sharp as his last time out but it was good enough to pick up his first Major League victory, lasting 5 2/3rds innings, limiting the San Francisco Giants to just one run on four hits while fanning three and walking two…Miguel Cabrera left in the 8th inning after aggravating his bothersome ankle but previous to that he clocked his 22nd dinger as part of a 2-for-4 day with two runs and three RBI…Torii Hunter lent a hand with three hits…Joaquin Arias had three hits and Hunter Pence stole his 13th in the losing cause.