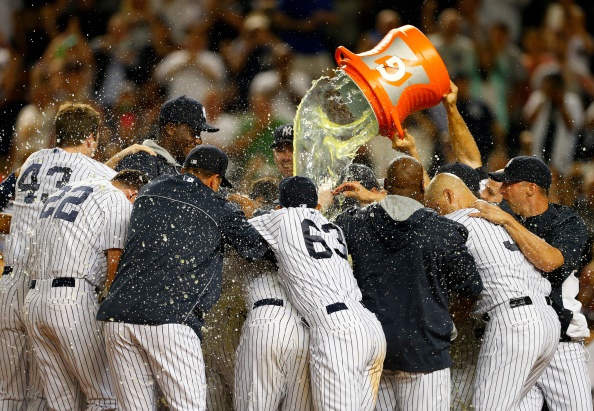 Trailing 4-3 in the bottom of the ninth, the Bronx Bombers lived up to their moniker as Mark Teixeira and Chase Headley each took Koji Uehara out of the park for a walk-off win…after the game Uehara told Japanese reporters he felt out of sync…Derek Jeter doubled in a pair in the third…in a lighter moment, David Ortiz feigned a bunt, causing Jeter to charge in out of the shift after which both veterans had a little laugh…Big Papi lined the next pitch over the right-field fence for one of the two homers he hit.

A two-run shot by Nelson Cruz and a three-run smash by Nick Hundley keyed a six-run first inning…despite the big cushion, Chris Tillman didn’t figure in the decision as he fell apart in the sixth...yes, I was riding Tillman pretty hard in DFS…Jonathan Schoop homered for his third straight game, his 15th…J.J. Hardy was the walkoff hero, singling in a pair with the bases loaded in the ninth…Devin Mesoraco keyed the Reds comeback, smacking a homer and a double, good for four RBI.

Max Scherzer was staked to a 4-0 lead in the first but let the Indians back in the game and was long gone before the Tigers exploded for a touchdown in extras…yes, I had Scherzer anchoring a couple of DFS cash games…as alluded to, Detroit scored seven times in the 11th, with Victor Martinez chipping in with the big blow, a three-run bomb…Ian Kinsler had three hits and scored twice…Scherzer was not sharp, working only six innings, walking three with four hits and four earned, though he did punch out half a dozen…Michael Bourn and Michael Brantley had a pair of hits for the Tribe.

Mark Buehrle tossed eight scoreless stanzas while Jake Odorizzi went 7.1 frames without allowing any runs…Buehrle held the Rays to five hits, walking one with four whiffs…Odorizzi was even stingier, scattering three hits with no walks, fanning three…Colby Rasmus came out of the doghouse to hit the game-winning homer in the 10th.

The Mariners jumped out to an early 9-0 lead and never looked back, keyed by two hits and four RBI from Robinson Cano…Chris Denorfia capped off a 2-for-3 evening with a 7th inning blast…Austin Jackson and Jesus Sucre also had a pair of hits for the victors…Roenis Elias tossed five innings of one-run ball to get the easy win, surrendering seven hits while walking and whiffing one…Rougned Odor hit his 9th in the 9th

The Angels handed Hector Santiago a four-run lead in the 4th which he promptly gave back in the 6th…no, surprisingly I didn’t have Santiago in DFS…Howie Kendrick, Erick Aybar and David Freese each had a pair of knocks for the Halos…Chris Iannetta had the game-winning sacrifice fly in the top of the 9th…Eduardo Nunez tied the game for the Twins in the 6th with a three-run blast.

Michael Wacha tossed three innings in his return from the disabled list, allowing a run on three hits, walking one and fanning three…Matt Carpenter and Matt Holliday each had three hits and a run…Wily Peralta worked six stanzas surrendering all three runs, whiffing seven along the way…Gerardo Parra had three hits while Rickie Weeks hit a pinch-hit home run in the losing cause.

After being held to just 19 hits for the first three games of the series in Petco Park, the D-backs’ bats came alive, swatting 13 in the finale…Ian Kennedy was responsible for ten of said hits, allowing four runs in 5.1 innings…you guessed it, I also had a few shares of Kennedy in DFS last night…Randall Delgado came out of the pen to hurl five scoreless before handing the ball to the bullpen…A.J. Pollock had three knocks in the winning effort…before you start feeling sorry for me, I still came out ahead on the evening as Chris Tillman and Ian Kennedy were heavily owned so most cash games came down to hitting and I did OK there.