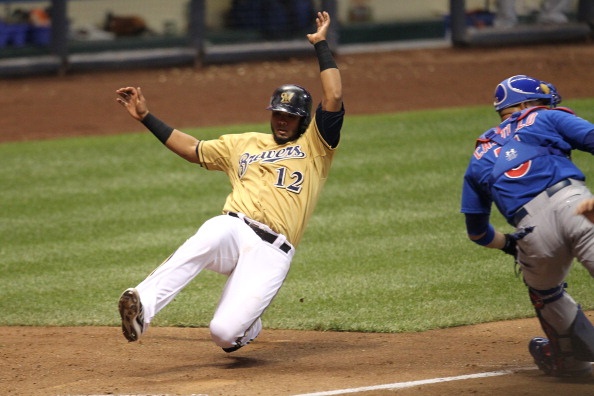 I received a couple of request to dedicate a column to the runs category. Ask and ye shall receive. Today we’ll talk about the runs category in general terms and then review some candidate to target if you need a boost.

Truth be told, there’s a reason why not as much bandwidth is allotted to runs as compared to the other categories. Everyone scores runs. Power hitters, speed demons – everyone scores runs. To be perfectly blunt, if your team is lacking in runs it is probably a result of subpar roster construction unless of course you simply don’t have a very good team.

If you’re down in runs the first thing to look at is at bats (or plate appearances). Chances are you’re also lagging in this area. The best fix is to find the weak spots in your lineup with respect to playing time or be more diligent with making sure you’re maximizing at bats within your league rules.

If you’re at bats are within reason, chances are you have at least one of the following dragging your runs total down:

If this is the case, you need to look to trades or perhaps waivers to rectify the situation.

The primary trick with trading for runs is to pair runs up with another category of need and address them both. The most likely candidates are batting average and steals since power hitters contribute in a minimum of three categories, sometimes four or five. So look to see where else you can gain ground and identify some players that can kill the proverbial two birds with one stone.

To get an idea of how eclectic the category is, last season the top ten scorers were Matt Carpenter, Mike Trout, Shin-Soo Choo, Miguel Cabrera, Chris Davis, Paul Goldschmidt, Matt Holliday, Joey Votto, Adam Jones and Austin Jackson. Actually, a pure speedster is missing but we do have a nice mix of top-of-the-order on-base types and meat-of-the-order sluggers.

The top-ten so far this season consists of Josh Donaldson, Brian Dozier, Troy Tulowitzki, Jose Bautista, Paul Goldschmidt, Giancarlo Stanton, Hunter Pence, Ian Kinsler, Carlos Gomez and Nelson Cruz. Again, nary a speedster in the bunch so fixing steals and runs at the same time could be more difficult than perceived.

So to get the biggest category impact, you’re going to need to target the best players in fantasy. This isn’t always plausible so here’s a list of some lesser players that could upgrade some spots you have now.

Christian Yelich, Miami Marlins: Yelich is fast becoming a personal favorite, not necessarily for fantasy but also just to watch play. He’s hitting on top of an order that will remain potent so long as Stanton remains healthy. Yelich walks in 11 percent of his plate appearances which bests the 10 percent desired from a lead off hitter. His main issue is contact. If Yelich can cut down on the whiffs and someone else besides Stanton can up their game (Casey McGehee, really?) then Yelich is capable of racking up the runs.

Kole Calhoun, Los Angeles Angels: A pre-season staple on many sleeper lists <<cough, cough>>, Calhoun has to be considered a disappointment as he hasn’t produced as expected when playing sandwiched around a DL stint. While his walk rate isn’t quite as good as Yelich’s at about 9 percent it’s acceptable. Calhoun too needs to increase his contact but if he does, there’s some decent firepower next in line to drive him in.

Danny Santana, Minnesota Twins: With the caveat that the Twins rotate outfielders more than most stores rotate their stock, if Santana can stick at the top of the order he has a chance to cross the dish a bunch of times especially if Kendrys Morales can solidify the middle of the Minnesota order. Aaron Hicks has been afforded multiple opportunities yet has failed to show what it takes, mentally or physically, to get the job done. Santana is a middle infielder by trade but isn’t particularly slick with the leather so if he can learn to chase files he’s got a chance to cease the musical chairs outfield, at least in center.

Leonys Martin, Texas Rangers: Martin’s potential takes a hit as he sits versus most southpaws. On the other hand, with the injury to Mitch Moreland, Shin-Soo Choo will probably assume the three-hole availing the top spot for Martin which will aid his production relative to the bottom of the order spots he was occupying so far this season.

Drew Stubbs, Colorado Rockies: At least short-term (and maybe longer) Stubbs will be the beneficiary of the injuries to Carlos Gonzalez and Michael Cuddyer as he’ll hit out of the two-hole ahead of Tulowitzki. Stubbs has poor on base skills but the Rockies may not have a choice but to use Stubbs near the top of the order.