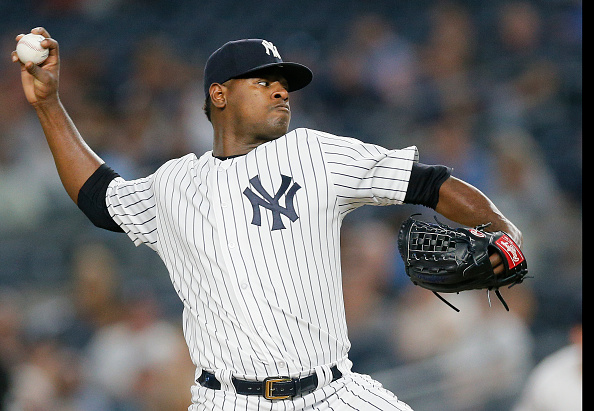 This is it for the Indians as they are down 0-2 to the Astros, so all hands on deck for them. The Indians come in as -118 home favorites, where the over-under is set at 8.5 runs. The Indians have scored a total of three runs in the first two games, showing how dominant the Astros pitchers truly are, which will continue today. They are facing off against Dallas Keuchel , who comes in with a career 3.24 ERA in the postseason. Keuchel isn’t a big strikeout pitcher, as he only has a 22% strikeout rate versus lefties and a 16% K% vs righties. Keuchel excels with his ground balls rate sitting at 52% or higher versus both types of hitters. On the other side of the mound, we will see Mike Clevinger going for the Tribe, who need to win in this elimination game. Clevinger finished the regular season with three or fewer earned runs in his last 10 starts. Clevinger has a solid 22% strikeout rate vs left-handed hitters and a 29% strikeout rate vs right-handed hitters this season. Clevinger is known to struggle with walks, as he has a 10% walk rate vs lefties and a bit lower 6% walk rate vs righties. Putting Astros hitters on base for free is a recipe for disaster with all of the power hitters they have lurking in their lineup. We are dealing with a three-game slate, so if you want to take a stand on either team and stack them up, that is a very viable plan. There isn’t a ton of value out there and both of these teams are known for having expensive power hitters, who could be tough to jam into your lineup. If I’m siding with anyone in this game, it has to be the Astros. The Indians just look lost at the plate and have only SIX TOTAL HITS in the first two games. Yes, six hits in 18 innings of playoff baseball. They have also struck out 24 times this series and are eyeing down a quick 0-3 sweep.

The Braves were able to stay alive last night with the help of the long ball, but are still facing elimination today. The Dodgers will have Rich Hill on the mound today, who is a very solid pitcher in most areas. Hill had seven or more strikeouts in his last eight starts of the regular season but allowed four earned runs in four of those starts. The Braves only strikeout out 20.1% of the time versus left-handed pitchers this season, which was fourth lowest. The Braves will be starting Mike Foltynewicz, who started game 1 and got roughed up a good bit. Folty gave up four earned runs in just two innings pitched, this past Thursday. The Braves are sticking with their ace to face the Dodgers who come in with a 22.6% strikeout rate vs right-handed pitchers this season, which was slightly worse than league average. The Dodgers have scored five or more runs in two of the three games this series, along with having seven home runs so far. They are relying on the long ball to score runs, which could prove to be the difference again today since Folty gave up 1.05 HR/9 to lefties this season. If you aren’t going to be rostering either pitcher in this game, I’m 100% on board with all of the hitters, since this should be the best hitting environment on the slate. The Braves have a solid hitter’s park and this should be the warmest of the three games, which is always a boost for hitters. The power is there on both sides, so go to Max Muncy , Yasiel Puig , Manny Machado , Justin Turner or Yasmani Grandal for the Dodgers and go to Freddie Freeman , Ronald Acuna , Ozzie Albies , Nick Markakis and Ender Inciarte for the Braves.

The greatest rivalry in sports turns to the Bronx tonight after splitting the games in Boston. The Yankees are coming off a win which was powered by the home run, which has been a theme for them all season. The Red Sox will have Nathan Eovaldi on the mound tonight, who has had success against the Yankees this season. He has a total of 23.1 innings pitched, with 18 strikeouts and allowing five earned runs. He is not without his struggles though, as he allowed 1.10 HR/9 or higher to both righties and lefties this season. Yankee Stadium is a fantastic hitter’s park, which can get out of hand quickly for a pitcher who is home run prone. On the Yankees side of things, they will be rolling out Luis Severino , who is coming off a very strong performance in the Wild Card game. He posted seven strikeouts, two hits, no earned runs in four innings against the Athletics last Wednesday. Severino had been very up and down versus the Red Sox this season, with his most recent star going for seven innings, six strikeouts and one earned run, while the start prior to that, he gave up four earned runs in under six innings of work. He still carries a 28% strikeout rate on the season, which is always threatening. The hitting has looked good on both sides, with the Yankees having 10 runs in the first two games and the Red Sox at 7. We all know the hitters in this game are expensive, but they have some serious power upside. For the Red Sox, look at Mookie Betts , J.D. Martínez , Andrew Benintendi , Xander Bogaerts , and Steve Pearce . For the Yankees, Aaron Judge , Giancarlo Stanton , Gary Sánchez , Andrew McCutchen , and Didi Gregorius .