Tom Vecchio breaks down Sunday's matchup between the Chargers and Rams to give you his take on what to watch for in this NFL contest on WinView Games. 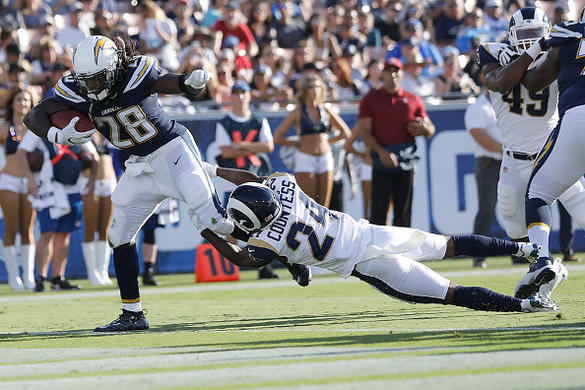 I’m going with NO on this one. Feel the offenses will be pass based in the first half and see who jumps out to the early lead.

-The first offensive play of the game is a running play that gains 3 or more yards 2.6/2.3

I’m sticking with the game being centered on the passing game, so have to go with NO here.

This falls in line with the first two and as I mentioned above, the Chargers have the 21st DVOA vs the pass, which is not good.

If you want to take YES on this, it really has to come from the Rams side of things, since I mentioned that the Chargers are without Joey Bosa , their top pass rusher.

Big time YES on this one. He is their top receiver and bringing in over six receptions per game so far.

I’m split on this one. Gurley has high offense market share, but he could also get the first down through the air. You could say YES on this one, in a way to slightly hedge against the earlier ones which are passing game centered.

R. Mostert - RB
SF
Raheem Mostert requested a trade from the 49ers.
It's one of the only leverage points he has over the 49ers right now as he looks to increase his salary up from $3 million. Mostert was the most efficient back in San Francisco last season and ultimately took over playoff games during the 49ers' Super Bowl run. His agent, Brett Tessler, notes that Mostert's contract was negotiated when he was just a core special teamer, not when he was entrenched as the 49ers' Week 1 projected starter. A trade is possible, but it would make sense for both parties to reach an agreement on a slight pay bump before the season begins. Mostert is only seeking Tevin Coleman money ($4.5M). It seems helpful to be a running back in Kyle Shanahan's scheme, but what do we know. If Mostert is ultimately traded, Coleman's average draft position (RB43) would be a complete smash for fantasy football. It's also worth noting Jerick McKinnon (ACL) has yet to resume cutting.
Added 5:08 pm (EST)
Added 5:08 pm (EST)

Q. Watkins - WR
PHI
Eagles signed sixth-round WR Quez Watkins to a four-year contract.
Watkins was the final addition to the Eagles receiver group this offseason who offers a vertical playmaking skillset, joining Jalen Reagor, Marquise Goodwin and others. Watkins recorded 13 receptions of 20-plus yards last season, good for 17th among FBS receivers, and averaged a ridiculous 18.6 yards per reception. It will be difficult for him to find an early-season role, and Watkins could wind up on the practice squad.
Added 2:35 pm (EST)
Added 2:35 pm (EST)

D. Henry - RB
TEN
The Titans are open to signing a new deal with franchise-tagged RB Derrick Henry prior to the July 15 deadline, but "no extension is on the verge of happening," according to Titans Insider Terry McCormick.
As of now, Henry will be playing on the $10.278 million franchise tag after rushing for over 1,500 yards and 16 touchdowns last season. McCormick reports Titans GM Jon Robinson and Cap Specialist Vin Marino continue to discuss long-term possibilities with Henry. The Titan's top back has already signed his tender, so he will be on the field in 2020 if an extension is agreed to or not.
Added 12:53 pm (EST)
Added 12:53 pm (EST)

J. Clowney - DL
SEA
Following the restructuring of DE Olivier Vernon's contract, a source told Pro Football Talk's Mike Florio that the Browns are likely ending their pursuit of free agent Jadeveon Clowney.
The Browns were among teams linked to Clowney throughout the offseason, joining the Titans, Raiders and the Seahawks. In fact, a report from beat writer Mary Kay Cabot claimed back in June that Cleveland "hadn't given up on" the idea of adding Clowney to their roster. There was previously very little guaranteed money tied to Vernon, but the re-work in his deal now adds over $10 million in guarantees. By their actions, the Browns are telling the public they are out of this race. The wavering status of training camp likely continues to delay Clowney's signing.
Added 11:42 am (EST)
Added 11:42 am (EST)

D. Irving - DL
DAL
Suspended DL David Irving is working to get back into the NFL.
Irving, who last played for the Cowboys in 2018, missed the 2019 season after being suspended for repeated violations of the league's substance abuse policy - including multiple missed drug tests. In March of 2019, Irving proclaimed he "quit" football. That has seemingly changed, as his representation contacted Jay Glazer, who helped Aldon Smith in his recovery and build a path back to the NFL. Irving will be 27 years old in August.
Added 10:01 am (EST)
Added 10:01 am (EST)

J. Hurd - WR
SF
49ers WR Jalen Hurd is expected to play the "big slot" role this season.
Per beat writer David Lombardi, the 49ers strive for "position-less" football, and Hurd might be the prime example. The former Vols running back could handle a couple carries per game, catch passes over the middle of the field, or use his 6-foot-4 inch frame to block on the edge -  likely busting common personnel groupings defenses match-up against. If Hurd is the "big slot," that makes Trent Taylor the "small slot." Both are coming off injuries that forced them to miss the entire 2019 season.
Added 9:43 am (EST)
Added 9:43 am (EST)